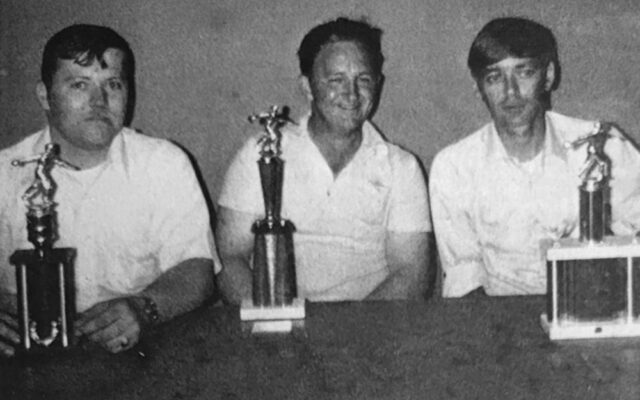 Head bankers — Percy R. Winslow, vice president and cashier of the Northern National Bank of Presque Isle, was elected president of the Maine Bankers Association at the annual meeting at Poland Spring.

Future Farmers of America speakers — Two members of the Presque Isle High School FFA Chapter were winners in the State FFA Convention. Linda Lynch won the Creed Speaking contest at the annual convention held at the University of Maine, Orono, while Randy Martin placed third in the public speaking contest with an original speech. Martin spoke on “Pesticides.”

McKay was all-star hoop player — A 13-year-old Washburn boy was named to his age division’s all-star basketball team at the Katahdin Basketball Camp in Etna. Kent McKay was named all-star center for the “College Division,” the youngest of the three age groups. The Katahdin Camp, which attempts to sharpen youthful basketball skills, was attended by 90 boys instructed by high school coaches from all over the state.

Outstanding athletes — Two Presque Isle High School graduating seniors were the recipients of the Frederick H. Adams Memorial Trophy on Class Day, June 15. Bill Smith and Charles “Chuck” Hilsabeck received the honor due to their participation in sports activities at the school. The award is made to an outstanding athlete each year and was donated by the Class of 1947 in memory of a classmate. Smith had been active in soccer, skiing and baseball, while Hilsabeck had participated actively in soccer, basketball and baseball. The presentation was made by James Dyer, coach.

Lyman received a Lifetime Achievement Award — Dave Lyman, General Manager of Four Seasons Communications, Inc., was named the winner of the LIfetime Achievement Award of the International Broadcasters Idea Bank, at the organization’s annual convention in Kansas City, MO. The International Broadcasters Idea Bank is an association of radio station owners and managers in countries throughout the English-speaking world. Lyman was recognized for his 45-year involvement in the training and development of broadcast personnel in the United States, Canada, Australia, and New Zealand. He had frequently been called upon as a speaker or seminar leader by the National Association of Broadcasters, the Radio Advertising Bureau, and scores of other industry groups. Lyman’s recognition is only the third presentation of the Idea Bank’s Lifetime Achievement Award in the 36-year history of the organization.

Smith was promoted — Russell C. Smith was promoted to safety environmental director at Maine Public Service Company, replacing John C. Poliquin who had changed careers and transferred to the Portland area. Smith began employment at MPS on March 20, 1989, as environmental  coordinator in the Mechanical Engineering Department and was promoted to assistant safety director and environmental coordinator on Jan. 1. He was raised in Presque Isle, attended the University of Maine at Presque Isle and graduated with a degree in Environmental  Studies. Active in his community, Smith served on the planning board and budget committee for the town of Chapman, the local steering group for the Maine Environmental Committee, and was an active member and director of the Presque Isle Fish and Game Club.

Forbidden foods for our four-legged friends are many and can be very dangerous if ingested. Sometimes, we give our pets leftovers or what we consider treats. According to many sources, some human foods can make an animal very sick, and in certain cases can even be lethal.
What's Happening This Week END_OF_DOCUMENT_TOKEN_TO_BE_REPLACED