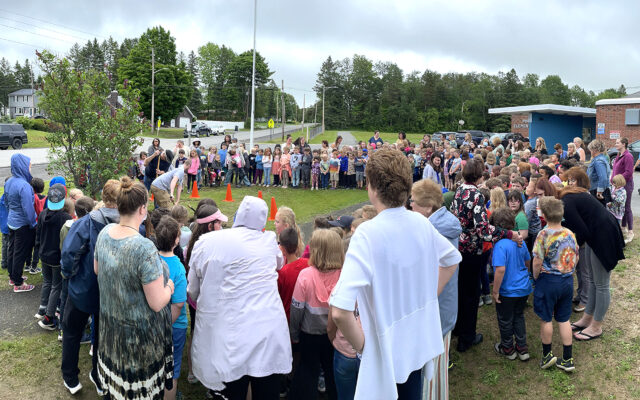 Paula Brewer • July 13, 2022
Some local students caught a glimpse of the past and shared the future during a time capsule adventure at Pine Street Elementary School.

PRESQUE ISLE, Maine — Some local students caught a glimpse of the past and shared the future during a time capsule adventure at Pine Street Elementary School.

When a staff member alerted Principal Bill Guerrette that students in 1987 had buried a time capsule on the school grounds, unearthing the treasures and having the school assemble their own artifacts seemed like a perfect celebration to end the school year.

“These kids — all of us — have endured a year of COVID-19 changes, and we’re just beginning to see things getting back to normal,” Guerrette said. “I thought it would be a good activity that would bring us together as a school.” 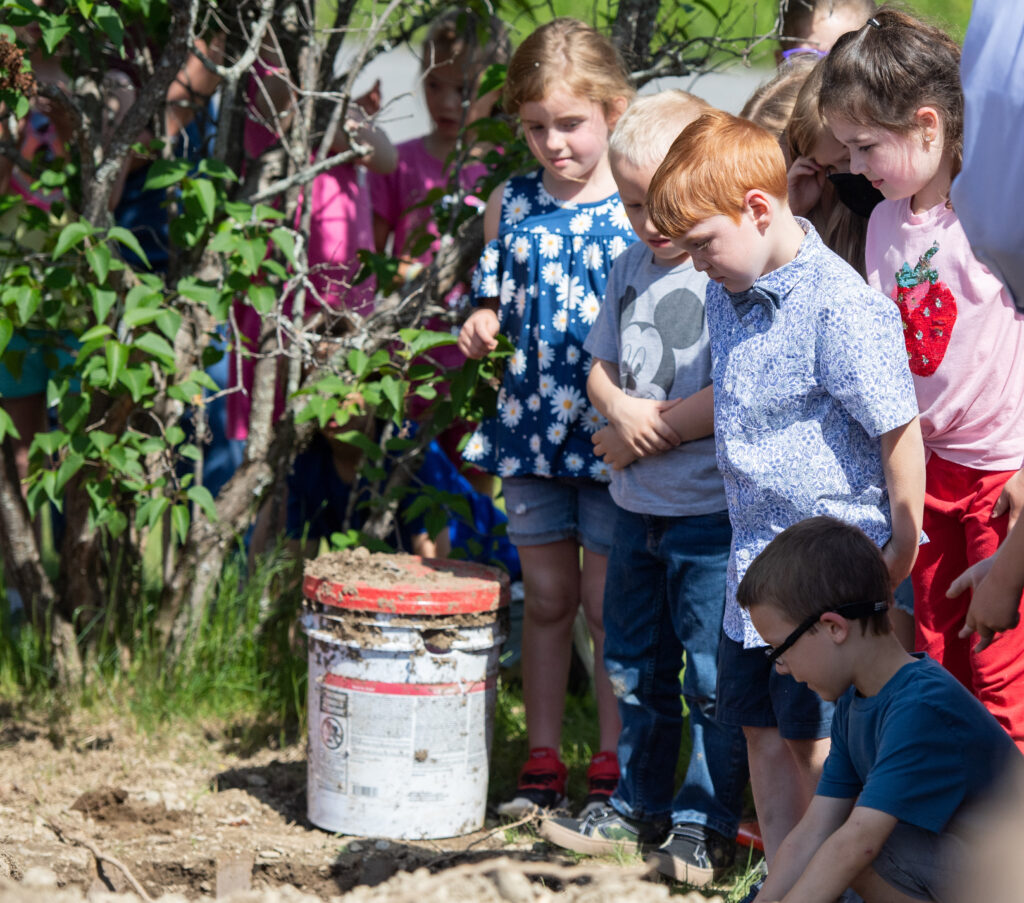 PRESQUE ISLE, Maine — July 12, 2022 — Pine Street Elementary School students gather around a 1987 time capsule as staff prepare to bury it once again on the school grounds. (Courtesy of Becky Shea)

It was also important to do the activity just before longtime elementary school facilities manager Tib Caron retired, Guerrette said. Caron notified him of the time capsule’s presence and helped coordinate the entire project.

Together they performed a test “dig” to make sure the capsule was where it was supposed to be, then with students and staff assembled they unearthed the sealed five-gallon pail.

Although water had seeped inside both the pail and the inner metal can, they were able to dry the items and display them at the school. Among the contents were letters, baseball cards, Pine Street pins — and something that added a special flair, a red correcting pen placed there by Pine Street teacher Priscilla Nichols.

But what really fascinated Guerrette were the letters. There were four, written for those who might see them 100 years in the future.

“I live in a yellow house by a mill. Would you do me a favor, go look if the mill is still there, please?” wrote Kathleen Morneau.

“I am burying this stuff because the fifth grade is studying the Constitution,” wrote Jaime Powers. “I have buried three marbles, a thousand dollar bill from Brazil and two 1987 Topps baseball cards.”

For this year’s container, each grade prepared something different to include. There were class pictures, notes on “What I like best about school,” and a memory quilt, where second-grade students each decorated a paper square and assembled them together. Someone also brought a listing of today’s gas prices.

The items were vacuum-sealed, put in plastic, and placed in another sealed five-gallon pail.

Staff invited several students who were fifth-graders in 1987 to attend the final time capsule celebration. Guerrette reached out to Nichols, who lives in Florida, and she was able to join on video.

Students, teachers, staff and guests gathered on June 16 to place both time capsules in the ground. Each student was able to take a handful of dirt and help bury them.

The chance to have the whole school involved in a positive end-of-year activity was a great way to wrap up his first year as Pine Street principal, Guerrette said.

“For me, the neat part was being able to tie in Priscilla [Nichols], since she was involved when they buried it,” he said.

Forbidden foods for our four-legged friends are many and can be very dangerous if ingested. Sometimes, we give our pets leftovers or what we consider treats. According to many sources, some human foods can make an animal very sick, and in certain cases can even be lethal.
What's Happening This Week END_OF_DOCUMENT_TOKEN_TO_BE_REPLACED