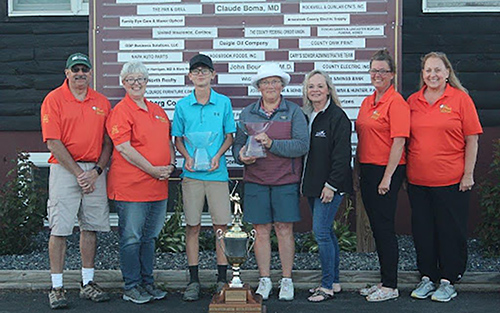 Playing in considerably windy conditions, Bruce bested some 90 golfers in the annual event to benefit the Jefferson Cary Foundation. Jane Hunter took the Ladies Division 1 title with a score of 91.

The tournament featured golfers from across The County, Millinocket, North Carolina and Utah. Tami Kilcollins, executive director of the Jefferson Cary Foundation, said the tournament continues a tradition of great golf for a good cause.

“We were so excited to see Michael Bruce take home the championship this year,” said Kilcollins, who coordinates the annual tournament. “He is an amazing young man and it is our hope that by being so successful he may bring other young people into the tournament.”

The Cary Classic, a one day, 18-hole event features a play your own ball format. A number of former tournament champions participated in this year’s event. Over the years the tournament has featured exciting finishes including a number of playoffs.

Kris Doody, RN and CEO of Cary Medical Center and Pines Health Services, said she was impressed with Bruce’s playing and it made this year’s event very special.

“It was just amazing to watch this young man play,” said Doody, who also participated in the tournament. “He really added something special and just did not seem to be rattled by the wind and just played so consistently. We have tried for some time to bring more ‘junior’ golfers into the Cary Classic and we hope that Michael’s performance will encourage other young men and women to compete.”

Bruce and Hunter both received $300 gift cards and glassware bowls as tournament champions. Some $6,000 in prizes were distributed to the four men’s and two ladies divisions. The tournament also featured closest to the pin and longest drive competitions. Prizes were made possible thanks to the corporate tournament sponsor Katahdin Trust Company, 10 major sponsors and nearly 50 hole sponsors.

Each golfer participating in the event and the volunteer tournament committee received embroidered polo shirts. Golfers were given a gift bag which included sleeves of three golf balls. A reception was held at the conclusion of the tournament where winners were recognized.

Kilcollins said the generosity of the community and sponsors make the tournament possible.

“The Cary Classic has established a tradition of great prizes and some of the best golfers in the region,” she said. “The tournament has raised many thousands of dollars over the years to benefit health care services at Cary Medical Center. This includes helping to purchase new medical equipment for Cary’s Women’s Imaging Center, the Jefferson Cary Cancer Center and more,” she said.

Kilcollins also praised the Caribou Country Club staff and grounds crew, and volunteers, including the tournament committee, who worked together to make the tournament happen.

“Every year the folks at the Caribou Country Club work so hard to get the course in the best shape of the season.  This year the course was in exceptional condition and many golfers remarked on the quality of the greens.  So many people are involved in this event and are so great to work with.  It is something we look forward to every year,” she said.

The $15,000 hole in one prize went unclaimed again this year. Since the tournament’s inception only one hole in one has been hit.

The Cary Classic Benefit Golf Tournament has been held at the Caribou Country Club for all its 38 years. Next year’s tournament will be held on Saturday, July 8, with a rain date of Sunday, July 9.

Forbidden foods for our four-legged friends are many and can be very dangerous if ingested. Sometimes, we give our pets leftovers or what we consider treats. According to many sources, some human foods can make an animal very sick, and in certain cases can even be lethal.
What's Happening This Week END_OF_DOCUMENT_TOKEN_TO_BE_REPLACED