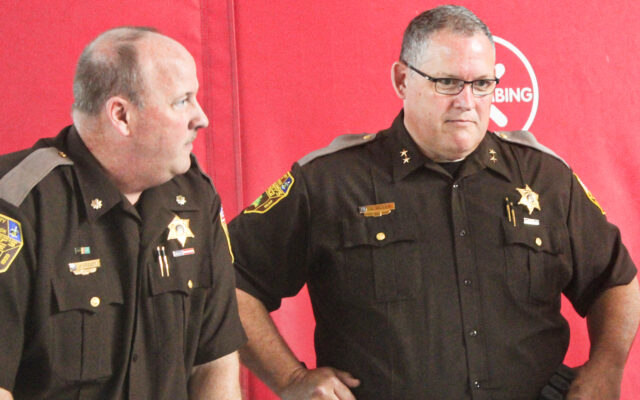 HOULTON, Maine — Aroostook County Sheriff’s deputies will soon have new tools to help in their fight against crime thanks to federal American Rescue Plan Act funds.

Twenty-two new body cameras and 15 tasers for deputies will be purchased with the federal funds to replace aging units. The $209,879 cost for the items will be covered entirely by the grant funding.

The Aroostook County Commissioners approved the expenditure of the grant funds during a Wednesday meeting in Houlton.

The body cameras are just the latest expenditure of those funds. Last month, Commissioners awarded $2,157,808 to 15 municipalities and nonprofits from across Aroostook County.

County Administrator Ryan Pelletier said Aroostook County received nearly $13 million in ARPA funds. “We are offering half to municipalities and nonprofits as competitive grants and the other half for (Aroostook) County projects,” he said.

Steve Pelletier, administrator of the ARPA funds for Aroostook County, explained that the sheriff’s request is actually saving the county about $95,000 by bundling the purchase from one company.

Commander Joey Seeley of the ACSO said they would likely try to sell the current body cameras, but told commissioners to not expect a large amount of money for them.

“A couple of agencies are using these particular cameras,” he said. “They are very cheap cameras that we purchased on Amazon and they have served their purpose. We have been trying to find money to upgrade them for a while.”

Seeley added the new cameras would be far more effective, providing a higher quality image, and be easier for deputies to operate. The biggest benefit for the cameras will come in time saved by deputies when downloading the video.

Under the current system, a deputy must visit one of three base stations — Houlton, Caribou or  Fort Kent — to download the video contained on the cameras. This method often added unnecessary trips for deputies, taking them off the road.

The new system will allow deputies to have docking stations at their homes where they can plug in the cameras. Footage can be downloaded while the deputy sleeps, making the process far more efficient, Seeley said.

Having footage to corroborate a deputy’s report of an incident has been extremely helpful for administrators, Seeley said.

“We want our deputies doing things the proper way and having video of an event can be a great tool for us,” he said. “It gives us a view of what the deputies are doing and serves as checks and balances to be sure they are following proper procedures.”

The cameras will also communicate with a deputy’s taser or firearm in that whenever a gun is drawn, the unit will automatically start recording.

Some of the tasers that are being replaced are upward of 15 years old, Seeley said.

Additional requests for ARPA funds are expected to be presented at the board’s August meeting, slated for 1 p.m. Wednesday, Aug. 17, in Fort Kent.

Every cat that passes through our doors has a story, some happy, some sad. In this article we want to share Bluebell’s story with you. Bluebell came in as a very pregnant stray. She had been living under someone’s porch.
What's Happening This Week END_OF_DOCUMENT_TOKEN_TO_BE_REPLACED