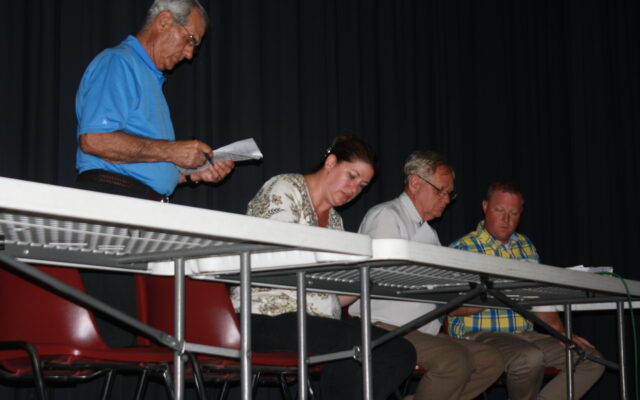 Melissa Lizotte • July 27, 2022
More than a month after sending back the proposed school budget, Limestone residents passed a slightly reduced figure on Thursday following debate on how much they could afford to spend.

LIMESTONE, Maine — More than a month after sending back the proposed school budget, Limestone residents passed a slightly reduced figure on Thursday following debate on how much they could afford to spend.

In June, voters rejected the proposed $4,435,138 budget, citing the significant increase from last year’s budget of $3,699,035. Their decision came at the end of a contentious two-day town meeting in which residents cut many budget articles, hoping to reduce the town’s tax rate.

At the latest meeting, school officials proposed a total budget of $4,419,138, only a $16,000 difference between the previous proposal. By the end of the more than two-hour meeting, voters had reduced several budget articles and approved a new $4,341,088 budget.

Most debate focused on the school’s proposed regular instruction costs, which totaled $1,740,549 and remained unchanged since the June meetings. Last year’s total cost was $1,354,534.

Dobbins attributed much of the higher cost to an increase in high school students and recent state legislation that requires districts to pay new teachers a $40,000 starting salary.

This year, regular instruction also includes a $87,968 grant from the Maine Department of Education to support expanding Limestone’s pre-K program to a daylong classroom. Aroostook County Action Program is partnering with the school and will provide $76,551 to support salaries for new pre-K staff.

The proposed budget for regular instruction also covered a $65,000 DOE grant to support a new Gifted and Talented program. The $65,000 would fund a stipend teacher position, for which the state would reimburse the school after two years of a successful program. Fifty-two students have been identified as eligible for the program.

“Essentially, three fourths of the [regular instruction] budget is being paid for by the DOE,” Dobbins said, referring to the state grants.

But many voters still believed that there was room for the school to reduce their contribution to the town’s tax rate.

“Maybe this isn’t the time to start a new program,” said Limestone resident Chuck Kelly, referring to Gifted and Talented.

Kelly made a motion to cut the regular instruction budget by $65,000, but a majority of voters defeated it. He later modified his motion to a $55,000, cut but voters also struck down that motion.

Resident Julie Weston spoke against the entire school budget, criticizing the school board for having “deaf ears” to voters’ requests at the June meeting. She admitted to sending residents flyers in the mail, which aimed to discourage most of them from voting for the school’s proposed budget.

“The town overwhelmingly said to go back and do better [with the budget], but you did practically nothing,” Weston said. “I don’t care how you fund it; it’s too much.”

Voters made similar decisions with the system administration and facilities maintenance portions of the school budget.

But voters went with an amended figure of $529,202 that Kelly proposed, based on his experiences calculating similar costs as a member of Limestone’s Water and Sewer District.

The newly approved $4,341,080 total budget means that Limestone must raise $629,864 to pay its share of public education instead of the $707,914 calculated through the originally proposed budget.

Forbidden foods for our four-legged friends are many and can be very dangerous if ingested. Sometimes, we give our pets leftovers or what we consider treats. According to many sources, some human foods can make an animal very sick, and in certain cases can even be lethal.
What's Happening This Week END_OF_DOCUMENT_TOKEN_TO_BE_REPLACED