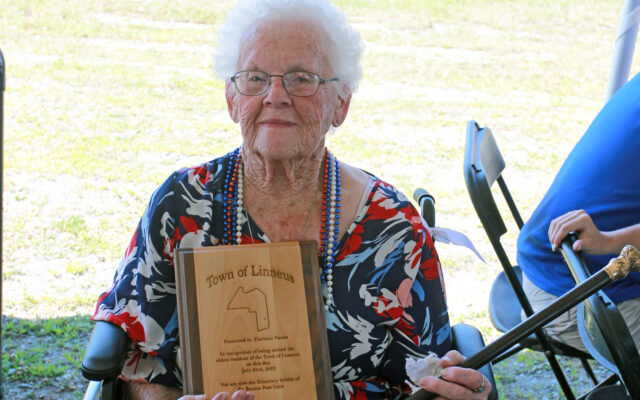 Joseph Cyr • July 28, 2022
Florence Nason wore many hats during her time as a municipal leader for the town of Linneus. The one-time town clerk and town manager, Nason was the guest of honor for Saturday’s Linneus Field Day parade and was presented with the Boston Post Cane as the town’s oldest living resident.

LINNEUS, Maine — Florence Nason wore many hats during her time as a municipal leader for the town of Linneus.

The one-time town clerk and town manager, Nason was the guest of honor for Saturday’s Linneus Field Day parade and was presented with the Boston Post Cane as the town’s oldest living resident.

Nason, who turns 93 on July 28, said she was humbled by the attention and missed the days when Linneus was booming. In the 2020 census, the population of the town was about 947.

“I think all of this was great,” she said. “The parade was really nice. We thought there was a lot going on (in Linneus).” 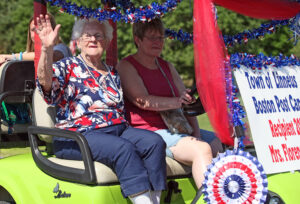 Florence Nason (left) waves to the crowd as she rides in the parade Saturday. Nason was presented with the town’s Boston Post Cane as its oldest resident. Driving the golf cart is Chris Nickerson. (Joseph Cyr | Houlton Pioneer Times)

The cane was originally gifted to the town of Linneus by the Boston Post, a now defunct newspaper, in 1909. It was one of 700 canes given to small towns across New England by Edwin Grozier, the then-publisher of the paper. It was originally meant to be passed down to the oldest male resident of the town, though women were included beginning in 1930.

Some of the Boston Post canes have since been lost or stolen, but Linneus has continued to pass down its original cane to its residents.

The canes were all made by J.F. Fradley and Co., a New York manufacturer, from ebony shipped in seven-foot lengths from the Congo in Africa. They were cut to cane lengths, seasoned for six months, turned on lathes to the right thickness, coated and polished. They had a 14-carat gold head two inches long, decorated by hand, and a ferruled tip. 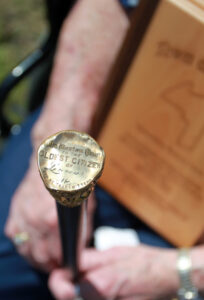 The tip of the Boston Post Cane is unique to each community, stating which town the cane belongs to. (Joseph Cyr | Houlton Pioneer Times)

Nason and her husband Philip were potato farmers for many years in the community. Philip died on Jan. 23, 2000. The couple had five children, 13 grandchildren and 33 great-grandchildren.

Her family roots are also tied to Cole’s Shoe Store in Houlton, one of the area’s longest running businesses in Aroostook County.

Working on the family farm was an experience Nason said she cherished. Like many of that generation, Nason did whatever was needed on the farm, whether it was driving the tractor, working on the harvester, picking rocks or planting in the spring.

“I was out in the field (for the potato harvest),” Nason said. “I didn’t stay home. It’s too bad they (kids today) don’t do it, because that’s what makes them good workers.” 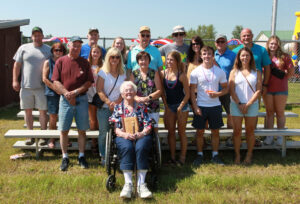 Florence Nason is surrounded by her extended family Saturday after being presented with the Boston Post Cane for Linneus. (Joseph Cyr | Houlton Pioneer Times)

Next year's Caribou City Council will include a new member and a longtime councilor thanks to Tuesday's election.
Pets END_OF_DOCUMENT_TOKEN_TO_BE_REPLACED

When I wrote the first story of our dog Odie, I didn’t know that I would write a Part 2, but there were so many more stories that I decided more of this little dog’s story needed to be told.
What's Happening This Week END_OF_DOCUMENT_TOKEN_TO_BE_REPLACED