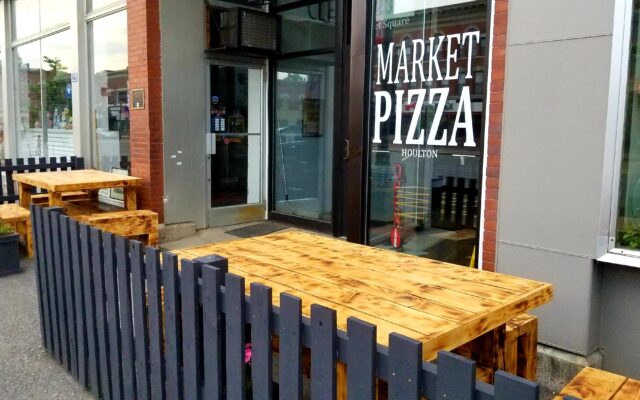 Kathleen Phalen Tomaselli, Special to The County • August 2, 2022
A local pizza restaurant might be able to serve beer and wine outdoors if the town council approves a new sidewalk dining policy slated for a vote at its next meeting Aug. 8.

HOULTON, Maine — A local pizza restaurant might be able to serve beer and wine outdoors if the town council approves a new sidewalk dining policy slated for a vote at its next meeting Aug. 8.

Fred Grant, the owner of Market Pizza on Market Square, originally asked the town council to endorse an extension of the restaurant’s liquor license to sell beer and wine to patrons dining in the restaurant’s small sidewalk cafe.

Market Pizza offers outdoor dining, but state liquor laws prevent the sale of alcohol until the town endorses its application for an extension to their license granting them the right to serve beer and wine outdoors.

But because the town had no sidewalk cafe policy, the council denied his request earlier this month, giving the town an opportunity to draft a policy before considering the endorsement.

“They were not opposed to putting a policy in place and they have drafted a policy typical with other towns,” Grant said on Tuesday morning.

During the town council’s Monday, July night meeting, a lengthy discussion of the topic brought up several issues including the definition of a sidewalk cafe, hours for serving alcohol, Americans with Disabilities Act compliance and the actual months the policy would be in effect.

“This is an excellent first draft,” said Councilor Susan Tortello, adding that the policy needs to define sidewalk cafe. “I think it’s wonderful that people want to use the downtown for this purpose.”

Still, Tortello said there is a big difference between having a picnic table where someone buys a coffee and a doughnut and a place where customers are served dinner.

Nonetheless, Town Manager Marian Anderson said they measured the distance from Market Pizza’s sidewalk cafe and the curb, and it is compliant with ADA regulations.  And she added that because the sidewalk is both brick and asphalt, there is some confusion about the distance, but it is measured the entire width to the curb.

During the July 25 meeting, McLaughlin shared the story of a veteran she met downtown as he was trying to navigate a curb with his scooter.

“It may not affect an able-bodied person, but when there’s a slant, it becomes very difficult, she said, referring to the Market Square sidewalk.

On Tuesday McLaughlin clarified her remarks during the meeting.

“I care about economic development and the businesses of the town,” she said. “We all need to take safety hazards into consideration. If we do both, that will benefit all.”

McLaughlin explained that it is evident the sidewalks need to be rebuilt in a safe manner for all and that it needs to be a priority for the town.

“I don’t want it to be turned into a bar. I’d just hate for it to turn into a bar downtown,” she said during the meeting.

Food must be served along with alcohol, according to Maine liquor laws.

To address such concerns, the draft policy suggests daylight sales of alcohol at sidewalk cafes.

“There are concerns on council so this would eliminate after-dark alcohol sales,” said Councilor Dennis Harmon.

Because there is such a short warm season in Maine, Harmon said they owe it to the business community to make a decision by the next meeting.

Grant, who opened the pizza restaurant last year, said they want to offer this service to the community.

“This is not a make or break for us,” said Grant. “But we would be able to provide something nearly every other town in Maine has.”

Forbidden foods for our four-legged friends are many and can be very dangerous if ingested. Sometimes, we give our pets leftovers or what we consider treats. According to many sources, some human foods can make an animal very sick, and in certain cases can even be lethal.
What's Happening This Week END_OF_DOCUMENT_TOKEN_TO_BE_REPLACED