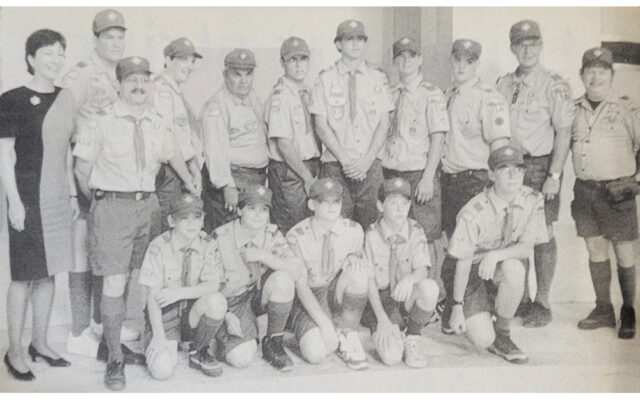 Kermit Crandall named president of Country Club — Kermit Crandall of Presque Isle was elected president of the Aroostook Valley Country Club for the ensuing year at a meeting of the new directors at the club. Other officers named were Perrin Edmunds, Fort Fairfield, vice-president and Walter Reed, Fort Fairfield, secretary-treasurer. Leonard Page and Crandall were named directors of the club to represent Presque Isle.

Main street newcomer — The latest addition to Presque Isle’s rapidly growing business section was Day’s Jewelry Store, which was in full operation. The store, located in the block formerly occupied by Mackin’s Pharmacy, was the most modern of any of the Day’s chain of stores in Maine. The entrance to the new store was completed except for the installation of the maroon marbled panels below and the modern show windows.

Nearing completion — The new Sears store, the largest retail store operated by the company north of Portland, which was being prepared for opening. Work on the building by the primary contractors was practically completed, and installation of floor and wall showcases and counters was proceeding rapidly and merchandise to stock the huge stock was pouring into Presque Isle. Mark Turner, owner of the building, said that construction of the building itself was practically completed.

Southwest Harbor teacher — David J. Dow, son of Mr. and Mrs. John A. Dow of Cedar Street, Presque Isle, accepted a teaching position in the Pemetic Elementary School at Southwest Harbor. Dow graduated from Presque Isle High School in 1965. He attended Nichols College in Dudley, Massachusetts, and transferred to Husson College in Bangor where he graduated in 1971 with a BS degree in business administration. He received his master of education degree from the University of Maine at Orono in 1972.

Special presentation — Rep. Mabel Desmond and Micahel Corey, executive director for the Maine Potato Board, presented David Lavway of Washburn with a legislative sentiment from Maine’s Legislature on becoming the new director of industry liaison to the National Potato Council.

Top qualifiers — During the Aroostook County League Regional Meet, the top qualifying individuals for the state championship were Mike Gallagher, Amy Roy and Jason Straetz, all of Presque Isle; B.J. McQuade, Shane Durost, John Woodworth and Adam Orser, all of Central Aroostook; Andrew Guy of Houlton; Denise Dumond and Chad Cyr, both of Ashland; and Ryan Everett, Jennifer Jose and Emily Jose, all of Caribou.

Education group obtained a state grant — The Central Aroostook Council on Education (CACE) organization obtained a state grant the previous spring for $17,500. It was used for the ongoing professional development of its membership as they continue to enable themselves to implement Maine’s Learning Results. The previous summer, 45 educators from the CACE area were trained as facilitators by personnel from the Department of Education. They led a workshop at the Presque Isle High School, attended by more than 500 educators from the University of Maine at Presque Isle and the schools of Caribou, Easton, Limestone, SAD 1, SAD 20, SAD 42 and other parts of Aroostook County.

Gubernatorial candidate John Glowa said that he wants to spur government reform that truly creates a system of, by and for the people when he visited Presque Isle City Hall.
Pets END_OF_DOCUMENT_TOKEN_TO_BE_REPLACED

This past week on the Central Aroostook Humane Society’s Facebook page, we asked everyone to show us some loved rescued pets. We said, “Share a picture and make our day.”
What's Happening This Week END_OF_DOCUMENT_TOKEN_TO_BE_REPLACED