Lee-Rae Jordan-Oliver, Special to The County • September 23, 2022
I thought I knew a lot about dogs until I adopted Dexter, our husky/shepherd mix last fall. One of the many lessons I learned was having your dog wear a seatbelt in the vehicle is a great idea! I did not know seatbelts for dogs even existed until our dog trainer, Tyler, suggested I purchase one.

I thought I knew a lot about dogs until I adopted Dexter, our husky/shepherd mix last fall. One of the many lessons I learned was having your dog wear a seatbelt in the vehicle is a great idea! I did not know seatbelts for dogs even existed until our dog trainer, Tyler, suggested I purchase one.

Before we got Dexter a seatbelt, he would become so excited about going for a ride that he would jump back and forth between the front and back seat of my truck. Since we bought him a harness which attaches to the seat buckle in the vehicle, he has no choice but to stay in the backseat. The seat belt also prevents him from catapulting into the dashboard should the vehicle stop suddenly.

The second lesson I learned from Dexter is that though his prey drive is extremely high, he does have the ability to show impulse control when asked to do so. We have three indoor cats which my children adore, and I never thought Dexter could be trusted to come inside the house.

Tyler suggested that I train him to stay in a designated “place” when he entered our home. So I bought a three by five rubber mat at Mardens and taught Dexter how to lie down and stay on his “place” whenever he came inside the house. 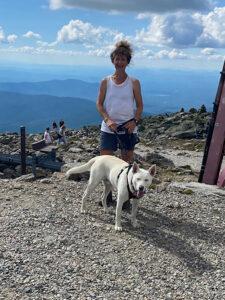 Author Lee-Rae Jordan-Oliver with her rambunctious canine companion Dexter at the summit of a hill on one of their many hikes together. (Courtesy of Lee-Rae Jordan-OIiver)

Every time he comes through the door, he goes right to his place and settles down. It’s not unusual for our three black cats to be lounging within feet of Dexter who is sprawled out on his mat. Thus far, he has been a gentleman when he’s invited inside and understands the cats are off limits. That being said, I do not leave him unattended for long periods of time while he’s in the house because I have witnessed the deadly results of his prey drive on our wilderness walks.

I’ve also learned that some dogs will chew and destroy anything and everything when they are stressed. When we first brought Dexter home, I tried hard to “dog proof” our garage which was his giant dog house while the family was at school or work. Even though he had plenty of dog toys, he would always find something to demolish. He would even stand on his hind legs to reach items on shelves that were supposed to be off limits.

This destructive behavior lasted for three months. After settling into a daily routine, which included plenty of exercise, socialization, and training, this ruinous habit completely disappeared. We now have a wooden shelf lined with our shoes, sandals, and sneakers completely out in the open.

The most important lesson I’ve learned about dogs is the more you can include a high energy, intelligent dog into your daily routine, the better companion they will become. This past summer Wyatt and I took Dexter on a two-night backpacking trip on the Appalachian Trail. The dog smile he wore for the entire trip made it clear he was having the time of his life eating, sleeping, and exploring new territory with his favorite people all day long.

Dexter’s training was really put to the test when we took him to Boston, Vermont, and New Hampshire on a three-day whirlwind family trip. On his first night in Boston, we ate at a dog-friendly outdoor restaurant. While we ate dinner, he laid down beside the table and observed his new surroundings with keen interest.

The following day, he and I walked seven-and-a-half miles on the Charles River walking and running trail. His senses were on overload with the myriad of sights, sounds, and smells he encountered. There were hundreds of people zipping along the trail on bikes, scooters, roller blades, and skateboards.

Through all of the commotion, honking horns, and roaring engines, he maintained his composure and walked confidently with me. The only time he became overly excited was when he saw pigeons, small rabbits, geese, and other dogs. This kept me on my toes for sure, but his instinctual behavior was manageable. Overall I was impressed by how well he kept it together in the hustle and bustle of Boston.

The highlight of the trip was when my daughter Anna and I hiked to the top of Mt. Washington with Dexter. He is a natural climber and rock hopped with enviable ease up the Tuckerman Ravine Trail.

Along the route there were miniature waterfalls where he’d stop to cool off and drink water whenever he needed to. My husband Matthew met us at the summit with the vehicle so we could continue our journey back to Maine. Exhausted from the day’s adventures, Dexter nestled into the backseat and promptly went sound asleep for the duration of our trip home.

For the first two years of Dexter’s life, he developed his problem-solving skills in order to survive. When we first brought him home from the shelter, he displayed some challenging behaviors that forced me to tap deep into a well of patience I didn’t know existed.

Time, energy, and lots of love have transformed him into a loyal companion who trusts his new family and is living his best life.

Lee-Rae Jordan-Oliver is an educator and author who lives in Hodgdon with her husband Matt and children Wyatt, Anna and Walker. This is the final column in her seven-part series on life with a spirited shelter dog.

Next year's Caribou City Council will include a new member and a longtime councilor thanks to Tuesday's election.
Pets END_OF_DOCUMENT_TOKEN_TO_BE_REPLACED

I know many of you have followed DeeDee’s story. DeeDee had leukemia and was under vet care for the past few weeks. Early one recent morning, she lost her battle with leukemia.
What's Happening This Week END_OF_DOCUMENT_TOKEN_TO_BE_REPLACED