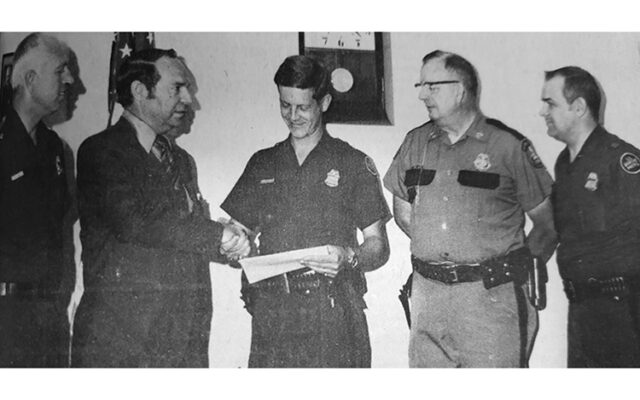 Contributed • September 28, 2022
75 Years Ago, Sept. 25, 1947 Indoor archery returns — The archery range is back to its old winter quarters again at the old armory on Mechanics Street. It will be open each Friday evening and there will be competent instructors for those who wish to learn this fascinating sport. Target fees will be 25 cents if use of the club equipment is desired, or 10 cents if one has his own.

Indoor archery returns — The archery range is back to its old winter quarters again at the old armory on Mechanics Street. It will be open each Friday evening and there will be competent instructors for those who wish to learn this fascinating sport. Target fees will be 25 cents if use of the club equipment is desired, or 10 cents if one has his own.

Grange fetes team — The Grange sponsored a banquet Tuesday evening for the American Legion baseball team, champions of the Aroostook County League. An interesting program of songs, readings and two dance numbers by the children were the entertainment features.

Houlton pair victors in big bridge tourney — Mrs. Ervin Stone and Mrs. Albert Daniels Jr., representing the Houlton Duplicate Bridge Club, brought home a bundle of master points as a result of their play in the annual Indian Summer Sectional Bridge Tournament over the weekend at Portland. The tournament is the largest conducted in Maine, and more than 180 tables were in play. Mrs. Stone and Mrs. Daniels placed second as overall winners in the two-session open pairs competition, and then teamed with Henry Francis of Memphis, Tennessee, and Mrs. Jay Gottesfeld of Andover, Massachusetts, to place first in the two-session Swiss team competition. For their efforts they earned 25 master points.

Gallivan takes Field Day title at Va-Jo-Wa — Neil Gallivan of Houlton won the annual field day at Va-Jo-Wa Golf Course in Island Falls. He shot a score of 76. Warren Walker was second with a 77 and Steve Edwards was third with a 77. The longest drive went to Jim Piece, the longest putt to George Pray and the closest to the pin to Jim Burton, all of Houlton.

Jipson is given duty in Germany — Army Private First Class Arthur F. Jipson, 18, son of Mrs. Bessie Sawyer of Houlton, recently was assigned to the 1st Armored Division in Germany. PFC Jipson is serving as a fuel and electric systems repairman with Headquarters and CompanyA of the Division’s 123D Maintenance Battalion at Furth. He entered the Army in January 1972, completed basic training at Ft. Dix, N.J., and was last stationed at Aberdeen Proving Ground, Md.

Potato house leveled by fire — A Houlton potato house was leveled by fire in the early hours of Oct. 3. Twenty-five firefighters, one ladder truck and two pumpers responded to the fully involved fire at 1:10 a.m. on Military Street, behind Graham’s Quick Mart, and were initially on the scene for four hours. The potato house, which wasn’t being used to store potatoes at the time, did house a woodworking shop in the north end, while the rest of the building was used for storage. Fire officials are unsure who actually owned the structure, but it was being leased by George Moody, Gary Sanders and Roger Sherman. Officials returned to the scene later that morning. “Another potato house is roughly 70 feet away. We went up a second time to tame it,” said Arlo Hall, Houlton Fire Department driver.

Houlton company nominated for award — A Houlton business was recently nominated for a State award. F.A. Peabody Company was nominated for the Governor’s Corporate Volunteerism Award, which was presented Oct. 7 by Gov. Angus King at the Blaine House in Augusta. The award presentation was part of the Governor’s Service Awards Program, which is now in its seventh year. Founded as the Governor’s Award for Excellence in Volunteer Administration by former Gov. John McKernan, the program has been expanded to recognize the contributions to quality of life by organizations.

Next year's Caribou City Council will include a new member and a longtime councilor thanks to Tuesday's election.
Pets END_OF_DOCUMENT_TOKEN_TO_BE_REPLACED

Everyone who enjoys the company of a dog knows that sometimes dogs have strange behaviors.  They may arrive in your life with the behaviors already in place, or perhaps they are adopted as a puppy and develop a behavior young.
What's Happening This Week END_OF_DOCUMENT_TOKEN_TO_BE_REPLACED