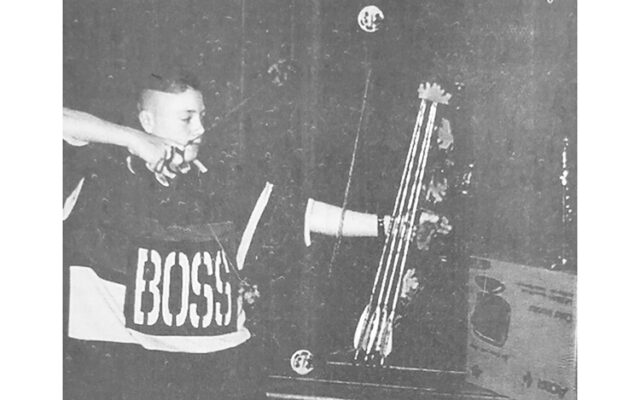 Arnold Peabody, coach, introduced players and mentioned the part each member played in the phenomenal winning streak of the team. Prin. Milton B. Lamber also paid high tribute to the players and to their coach. He particularly referred to the splendid show all during their season and declared that a winning baseball team cannot help but be a good thing for a town.

Six seniors to be in competition –  Six seniors from Houlton HIgh have been elected by their classmates to compete with students from other high schools throughout the United States and territories for 119 Pepsi-Cola four-year college scholarships and more than 550 $50 college entrance awards. The contestants chosen were Anne Hannen, Judi Nevers, John Waalewyn, William Holden, Cleo Boutilier and Forrest Goodall. According to Milton B. Lambert, principal of Houlton High, it is both a scholastic and a personal honor to be selected as a contestant for one of these scholarships, since a student so elected must be one who is, in the opinion of his classmates, “most likely to make an important contribution to human progress.”

Littleton home ruined by early fire – A Littleton home was destroyed by fire Oct. 25. The Station Road home, owned by Dale R. Henderson of Littleton, was fully involved when crews got to the scene. The house received an estimated $75,000 damage during the early morning fire.  Fire officials say the fire is believed to have started around a flue pipe near the ceiling of the family room. A wood stove in the room located next to the garage was also being used as a source of heat. Henderson was not home at the time. Officials say the home either did not have a smoke detector, or it was not working at the time of the fire. Mutual aid was received from the Monticello Fire Department.

Third place in state archery competition–  Nick Quint, son of Larry and Tammy Beaulieu of Hodgdon, is a 14 year old eighth-grader at Hodgdon Middle School with a new “target” to shoot for in life. After less than a year of practice with no formal training, Quint garnered third place at the State Archery Competition held last month in Newport. What is more amazing is that he accomplished this feat just a month after having the tips of three fingers removed, the result of a lumber accident. “I had to have surgery and stay in the hospital overnight. The bandage was as big as my arm at first,” said Quint. “It was a lot smaller by the time I got to the competition. It still hurt though.” Despite this drawback, he set his sights on the trophy that signified the best of the best. “I was in second place when we finished up on Saturday,” he said. “Then, on Sunday, I lost 13 points.”

We are now into the hunting season, whether it is with guns or bows, hunting for birds, bear, rabbits, deer or any wild animal.
What's Happening This Week END_OF_DOCUMENT_TOKEN_TO_BE_REPLACED