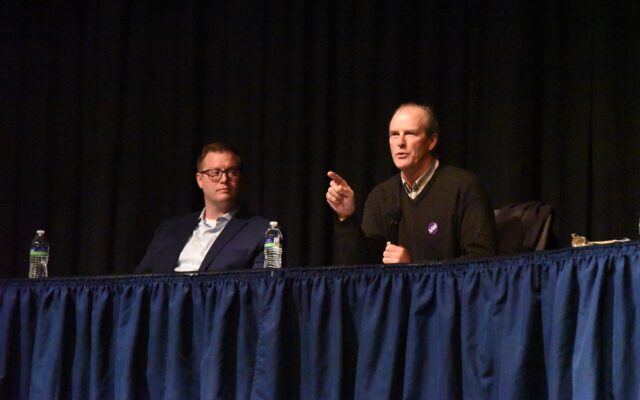 Hunkler, 65, a semi-retired physician from Beals, earlier in the day visited the Presque Isle Rotary Club before making his way to Easton, Fort Fairfield, Washburn, Castle Hill and Mapleton to put out his campaign signs.

The long-shot candidate is polling at 2 percent, according to a survey of 800 likely Maine voters released Thursday. The survey found that Democratic Gov. Janet Mills got support from 49 percent of voters compared with 39 percent for former Gov. Paul LePage.

Thursday evening, he participated in a candidate forum at the Presque Isle Middle School Auditorium in his first trip to The County, where students asked questions. The first-time political candidate said he wants to move the dial away from the two-party system.

“As you probably know, I am quite a dark horse here in this race. I am running against two governors and I have not been in politics at all, but one of the things — if nothing else — I hope we can move the dial a little bit,” Hunkler said.

The candidate wanted to see more than Republicans and Democrats in the political field, which is why he started his campaign for governor, he said. He hopes to entice more young people to become involved in politics and have political leadership roles.

Hunkler started his campaign by collecting 4,000 signatures from supporters. He has accepted no campaign donations and has done no commercial advertising. He set a goal of spending no more than $5,000 of his own money on the campaign and owes nothing to special interests, he said.

“Money corrupts,” Hunkler said. “I am here without money, fame or party.”

Hunkler drew on his experience as a family physician and said people spend too much money on healthcare. He favors more accessible care for people and increased coverage for mental health.

Hunkler stayed in Caribou overnight and on Friday was bound for Van Buren and Madawaska, as well as a visit to University of Maine at Fort Kent. He planned to end his tour by heading south down Route 11 and putting out signs along the way.

Next year's Caribou City Council will include a new member and a longtime councilor thanks to Tuesday's election.
Pets END_OF_DOCUMENT_TOKEN_TO_BE_REPLACED

Everyone who enjoys the company of a dog knows that sometimes dogs have strange behaviors.  They may arrive in your life with the behaviors already in place, or perhaps they are adopted as a puppy and develop a behavior young.
What's Happening This Week END_OF_DOCUMENT_TOKEN_TO_BE_REPLACED