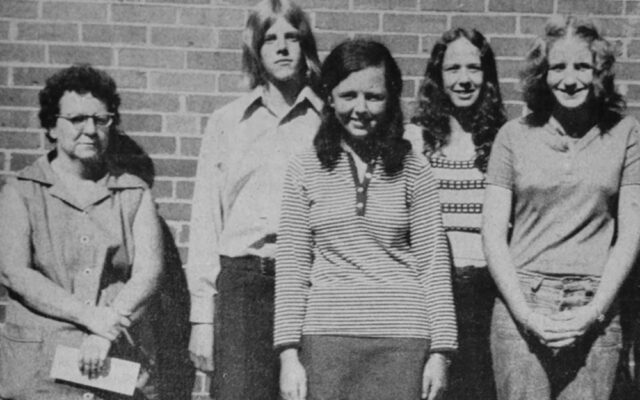 Yvonne Tardie • October 27, 2022
75 Years Ago - Oct. 23, 1947 Golfers received awards — Lloyd Hawkins, director of golf for the Presque Isle Athletic Association, presented the runner-up prize to Bud Survant for the handicap tourney at the banquet of the Presque Isle Golf Association.

Previous to this presentation, Hawkins had awarded the winner’s trophy to Frank Hayes, Bud’s father-in-law. The consolation division title was won by Walter Wray, who received the Dalling Memorial Trophy from Ralph Wood.

Bryant honored — Harold E. Bryant, former president of the Presque Isle Chamber of Commerce, was elected a director of the Maine State Chamber of Commerce on a statewide ballot, it was announced at the annual meeting of the organization in Portland. Representatives of the local chamber attended the Portland session which was followed by a national affairs conference.

Watt goes into business — After being employed with Rathbun Lumber Company of Presque Isle for 20 years, H. Marvin Watt decided to go into business for himself. A former Easton resident, Watt opened a gospel bookstore at 425 Main Street, formerly the Boston Shoe Store. The Living Word, as it was called, celebrated its second anniversary with Watt and his wife, the former Ruby Adams of Perth, New Brunswick, as co-owners. Mr. and Mrs. Watt had four children and had lived in Presque Isle about 20 years. The store carried religious books, music, cards, Sunday School supplies and gift items.

Security chief — The management of Potato Service Inc. announced the appointment of George “Bud” Graves as department chief of its security force. Graves had completed a 20-year tenure with the Maine State Police and his experience in the law enforcement field was certain to be of great value to the local processing company, Potato Service officials said.

Key Bank donated to the program — Key Bank of Maine donated $5,000 to SAD 1 for its agricultural science program at Presque Isle High School. The donation was made to Superintendent of Schools Gehrig Johnson and SAD 1 Board Chairman Robert Davis by the bank’s Senior Vice President Michael Kelley and Vice President Brian Flewelling at the board’s meeting Wednesday night. Kelley said the bank was happy to make the donation for the program’s new building and other future projects. Ground had been broken on a new building. In his presentation, Kelley evoked the words of Vaughn Grisham, a rural-development specialist who spoke earlier in the month in Presque Isle. Grisham noted that the citizens who energized an impoverished region of Mississippi focused on investing in youth and education.

Maine Mutual honored for 100th — Secretary of State Dan A. Gwadosky was scheduled to honor the Maine Mutual Fire Insurance Co. for 100 years of incorporation at the company’s headquarters in Presque Isle. The business was incorporated in Maine on Aug. 19, 1897. Gwadosky presented a special citation to Larry M. Shaw, the president and chief executive officer of Maine Mutual. The Maine Mutual Fire Insurance Co. had 1,050 licensed agents, representing 127 agencies in 235 offices throughout Maine, New Hampshire and Vermont. In 1996, the company’s written premiums totaled $47.053 million.

Next year's Caribou City Council will include a new member and a longtime councilor thanks to Tuesday's election.
Pets END_OF_DOCUMENT_TOKEN_TO_BE_REPLACED

What a beautiful fall we are having.  We hope you and your furry friends have been able to go on long walks enjoying all these “bonus days.” Even though the pandemic has put an unexpected cramp in most of our lives, we are all starting to get a glimpse of our past “normal” life reappearing.  There will definitely be the usual ghosts, goblins and superheroes out on the prowl on Halloween night.
What's Happening This Week END_OF_DOCUMENT_TOKEN_TO_BE_REPLACED