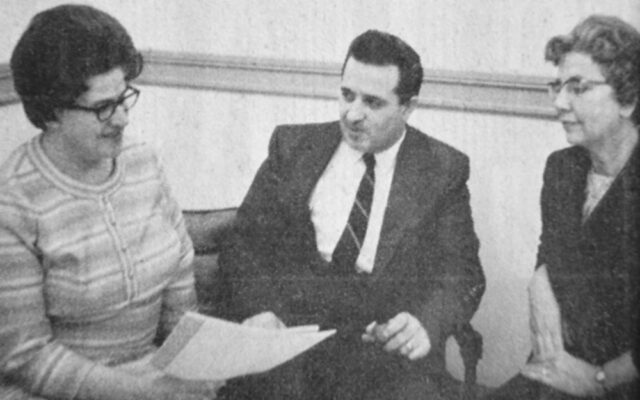 $4,800 reported in Community Chest drive — Workers in the annual Presque Isle Community Chest campaign reported contributions of approximately $4,800 toward the goal of $16,950 as the drive swung into its second and final week, Harold D. Glidden, campaign chairman, announced.

The Community Chest drive chairman urged that solicitors complete their calls and get their reports in as soon as possible, as the drive was scheduled to close.

McIntire appointed assistant general manager — Harold E. Bryant, general manager, announced that Clifford McIntire of Perham was appointed assistant general manager and head of the Credit Department of Maine Potato Growers Inc. Mr. McIntire, a graduate of the University of Maine, had been employed since 1933 by the Federal Land Bank of Springfield, Massachusetts, and had served for the previous year as associate regional manager in Maine. He had also carried on continued farming operations in Perham in partnership with his brother, Smith. He had been a member of the board of directors of Maine Potato Growers Inc. since 1945 and was a member of the executive committee of the Aroostook County Farm Bureau.

Mars Hill manager named — J. Roger Erskine, president of the Northern National Bank, announced that Philip J. Deschensne had been appointed manager of their Mars Hill office. Deschensne, a native of Fort Fairfield, had been the credit supervisor, Installment Loan Department at the Presque Isle office. He joined the bank in September of 1962 as a time sales adjustor. He was a graduate of Fort Fairfield High School, married to the former Sally Davidson of Limestone, and they had three children, Karen, Kristie and Mark. Fred Wilson, the former manager in Mars Hill, returned to the main office in Presque Isle.

Owls claimed Northeast College soccer title — Wednesday afternoon, October 25, was a red-letter day for the soccer team at the University of Maine at Presque Isle when the Owls won the Northeast College Conference crown by playing a tie game, 4 to 4, with Ricker College in Houlton. A loss would have meant a tie for first place in the conference. The locals didn’t have much success against the Bull Dogs, and this was the Owls’ first college conference championship. The game was played in poor weather conditions, but the contest provided plenty of fireworks nonetheless.

$2,536.28 raised for the hospital — The 15th annual Antique Show and Sale sponsored here Oct. 17-18 by the Women’s Auxiliary of the A.R. Gould Memorial Hospital produced a $2,536.28 profit for the year. In reporting the show’s success, Mrs. Alfred Litz, chairman of the year’s event, noted that the 15 antique dealers who brought their collections to Presque Isle a couple of weeks prior, were all anxious to return the following year.

Happy campers — Several Central Aroostook County residents attended the Maine Conservation Camp held during the summer at the Greenland Point Center on Long Lake in Princeton. During three years of operation, hundreds of Maine girls and boys graduated with certification in hunting and boating safety as well as a foundation in the conservation practices used in the Maine woods. The camp, sponsored by the University of Maine at Machias, was a one-week program for young people ages 12 to 14. Local residents who attended the last session were Amy Burby, Sarah Sherwood, Jesse Sherwood, Stuart Cray, Marshall Dyer and Jesse Powers.

Next year's Caribou City Council will include a new member and a longtime councilor thanks to Tuesday's election.
Pets END_OF_DOCUMENT_TOKEN_TO_BE_REPLACED

What a beautiful fall we are having.  We hope you and your furry friends have been able to go on long walks enjoying all these “bonus days.” Even though the pandemic has put an unexpected cramp in most of our lives, we are all starting to get a glimpse of our past “normal” life reappearing.  There will definitely be the usual ghosts, goblins and superheroes out on the prowl on Halloween night.
What's Happening This Week END_OF_DOCUMENT_TOKEN_TO_BE_REPLACED