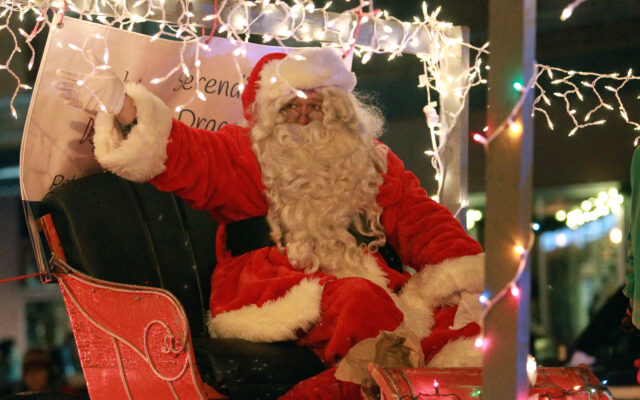 HOULTON, Maine — The colors of Christmas will soon fill Houlton’s downtown as the annual Holiday Light Parade returns Saturday, Nov. 26, to officially kick off the holidays.

But the holiday lights will not be the only attraction this year. This year, the night skies will also be illuminated with a colorful fireworks display.

“(The fireworks) were one of those things that I thought we could keep secret, so we could have the ‘surprise’ factor,” explained Jane Torres, executive director of the Greater Houlton Chamber of Commerce. “But then I realized even more people would come if we let them know.”

She explained that LongRoad Energy called in the fall offering to sponsor something and her mind immediately went to fireworks.

“The chamber has always wanted to have a winter fireworks display, but it’s very expensive,” she said. “So when the offer came to totally fund the show, it fit perfectly into this year’s parade theme – the Spirit of Giving. EDP Renewables also agreed to be a parade sponsor, so the parade as well as the fireworks are a gift to the community. We cannot thank these two organizations enough.”

The popular yuletide event draws thousands to Houlton each year to see the many different colored and decorated vehicles and also features a visit by Santa Claus himself, who officially illuminates the town’s Christmas tree.

The Christmas parade is a tradition that has gone on for longer than most can remember, but has evolved over time. What was once a mid-afternoon parade, complete with marching bands, changed to a nighttime holiday light parade, in which entrants are encouraged to come up with interesting, eye-catching floats using generators to power the thousands of lights adorning their entry.

This year’s parade will once again start at the North Street Shopping Plaza at 6 p.m. and make its way down North Street before stopping in Market Square to illuminate the town tree.

“At the moment the tree will be lit, the fireworks will go off and we’re hoping everyone will stay to watch the show,” Torres said. “After the fireworks, Santa will be going to Serendipitous Dragonfly to meet with the children.”

Saturday, Nov. 26, also marks the beginning of the free matinee series at the Temple Theatre, which is another popular draw for families. With the help of business sponsors, the theater is able to show free matinees, and typically features family-friendly movies. The show begins at 11:30 a.m. and will feature a different free movie each Saturday through Dec. 17.

There is no cost to register a float. Floats will be judged and prizes awarded to the top entries. Those who have not pre-registered may still show up on the night of the parade, but are asked to come by at 5:30 p.m. to check-in.

“There is plenty of room for additional floats, walkers, and anyone else who wants to be in the parade,” Torres said.

Next year's Caribou City Council will include a new member and a longtime councilor thanks to Tuesday's election.
Pets END_OF_DOCUMENT_TOKEN_TO_BE_REPLACED

Everyone who enjoys the company of a dog knows that sometimes dogs have strange behaviors.  They may arrive in your life with the behaviors already in place, or perhaps they are adopted as a puppy and develop a behavior young.
What's Happening This Week END_OF_DOCUMENT_TOKEN_TO_BE_REPLACED