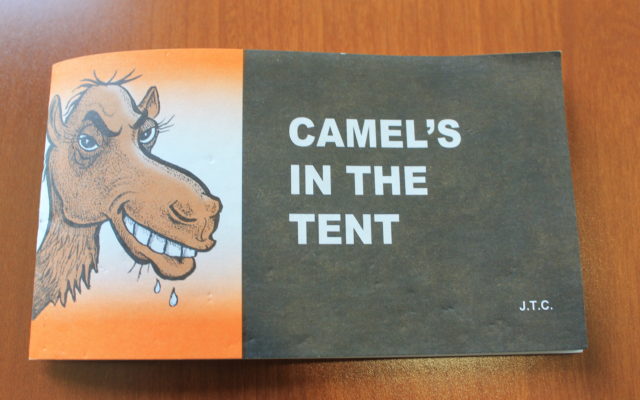 Anthony Brino • July 19, 2017
Copies of an anti-Islam comic book-like leaflet by a controversial Christian evangelist were left on some people’s vehicles in Presque Isle Tuesday.

Copies of an anti-Islam comic book-like leaflet by a controversial Christian evangelist were left on some people’s vehicles in Presque Isle Tuesday.

Someone left copies of “Camel’s in the Tent,” a 2012 publication by the late Jack Chick warning of a Muslim invasion, on a number of vehicles in the parking lot of Ben’s Trading Post in Presque Isle.

According to Presque Isle Police Chief Matt Irwin, there were no formal complaints about the material being left, but someone did bring copies to the police station to report what happened.

It is not clear if the comic books were left in other locations, Irwin said. The police department is not investigating the matter, though Irwin said the police would investigate if property owners reported that the person distributing the publications was trespassing. 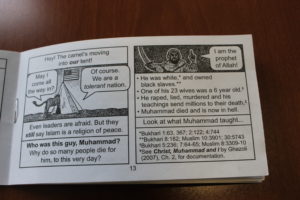 Copies of the leaflet “Camel’s in the Tent” (page displayed here) by the late Jack Chick, a controversial Christian evangelist, were left on some people’s cars in Presque Isle on Tuesday, July 18. (Anthony Brino)

A spokesperson for the Maine Attorney General’s office said Wednesday that the office has not been made aware of the pamphlets left in Presque Isle or elsewhere. By themselves, the publications do not violate the Maine Civil Rights Act. Only acts that involve physical force or violence against a person, damage or destruction of property, or threat of such warrant action by the attorney general’s office.

The leaflets left on the vehicles in Presque Isle are from Chick Publications, an Ontario, California-based Christian evangelical publishing house. The “Camel’s in the Tent” alleges that Muslims are secretly plotting a worldwide “takeover” and offers what experts say is an inaccurate and stereotype-filled perspective on the creation of Islam and its modern practice.

The publication ends with a prediction of the second coming of Jesus Christ in conjunction with a war of religions taking place in Israel.

Karen Rockney, a spokesperson for Chick Publications, said the company was not aware who was distributing the booklets, or tracts in Presque Isle.

“Our tracts are sold around the world and purchased by individuals, bookstores, businesses and churches, so we would have no idea who is passing them out in Maine,” she said.

“They produce these bigoted tracts that are designed to be left in public places,” said Hooper. “I don’t know how many people are impacted by them other than being mildly offended.”Hooper said that the Council on American-Islamic Relations works to improve mutual understanding of Islam in America. He said the organization always has supported free speech, including when it comes to bigoted and offensive materials, and believes that most people do not subscribe to the type of views espoused in the Chick booklets.

“They’re so clearly bigoted in their outlook,” Hooper said of the tracts. “People can use their common sense to judge whether this is accurate. Muslims in America have nothing to hide.”

While Hooper said he was not familiar with similar incidents of anti-Islam propaganda appearing in New England, he said parts of the country are confronting more threats and hate crimes against Muslim communities.

“The distribution of this publication is symptomatic of a rise in anti-Islamic sentiment in our society,” Hooper said.

For the first time since 2019, there is competition for open seats on the Houlton Town Council
Pets END_OF_DOCUMENT_TOKEN_TO_BE_REPLACED

We hope everyone enjoyed a wonderful holiday season and is looking forward to the new year.  December was a busy month at the Central Aroostook Humane Society with so many people and businesses bringing in much-needed supplies and monetary donations, which help us to take care of the special temporary pets in our care.
What's Happening This Week END_OF_DOCUMENT_TOKEN_TO_BE_REPLACED