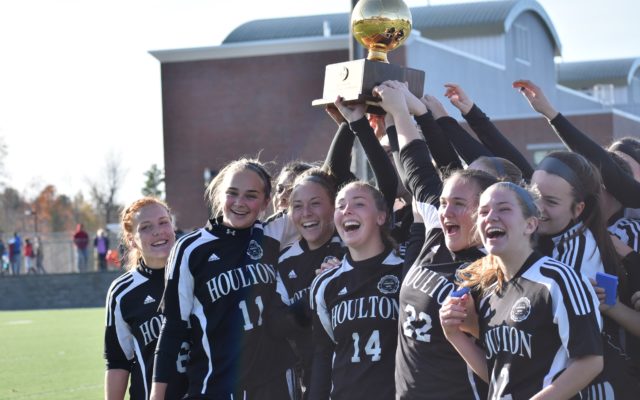 Pete Warner, Bangor Daily News • November 4, 2017
The Houlton High School girls soccer team amassed 88 goals over the course of their first 17 games this season. On Saturday afternoon, they only needed one.

HAMPDEN, Maine — The Houlton High School girls soccer team amassed 88 goals over the course of their first 17 games this season. On Saturday afternoon, they only needed one.

The Shiretowners played cohesively on the defensive end and received alert goalkeeping from Tessa Solomon, setting the tone for a 1-0 victory over Madison in the Class C state championship game played on the artificial turf at Hampden Academy.

Coach Tim Tweedie’s Houlton squad (17-1) earned only the second gold ball in program history and the Shires’ first since 1987.

Houlton relied heavily on the experience and poise of its seniors, including the hard-nosed play of defenders Tyra Gentle, Claire Gilpatrick, Alexis Miller and Aspen Flewelling.

That group helped make life easier for Solomon, who made six of her seven saves in the second half to help hold off a skilled and resilient Madison team spearheaded by Sydney LeBlanc, Jillian Holden and Ashley Emery.

“We had to play more defensively once they scored,” said Gentle. “We had to make sure that we contained them and we communicated well. I think that’s what helped us.”

Perhaps Solomon’s most impactful save came with just under 32 minutes to play. Emery’s free kick from 15 yards out bounced into the goalmouth where LeBlanc found the ball and fired a point-blank shot that was rejected by Solomon.

LeBlanc pounced on the rebound, but chipped the follow-up shot over the crossbar.

It was only a little more than three minutes later that the Shires generated the only goal of the contest.

Sierra Hoops made a short run down the left flank and crossed it into the middle with her left foot. The ball went past teammate Mia Hanning and snuck through a group of Madison defenders where Kolleen Bouchard ran onto it, controlled the ball and fired a hard shot past Bulldog keeper Lauren Hay with 28:46 remaining.

Madison tried for the equalizer, but was unable to put together much in the way of sustained pressure and was forced to shoot mostly from long distance.

Emery got a 28-yard free kick on goal that was punched out by Solomon with 27:07 left, then eluded a trio of Houlton defenders for a 10-yard shot that was grabbed by Solomon five minutes later.

The Bulldogs’ best opportunity down the stretch came at the 4:30 mark when Emily Edgerly was able to skim a crossing ball off her head and on goal, where Solomon was waiting. Her follow-up shot went high.

Houlton received lots of contributions in rebuffing Madison’s assaults. Anessa Wilde, Amelia Ivey, Jamie Brown and Madison Grant all had a hand in rebuffing repeated attacks by the Bulldogs, whether playing in the back or in the midfield.

The Shires managed only five shots, two of which made it on goal. They had several attempts that were blocked away by the defense.

Speedy Houlton forwards Hanning and Hoops gave Madison plenty to worry about on the flanks, as did Bouchard’s gritty play in the midfield, but the back line including Annie Worthen, Marah Hall, Trista Giroux and Lauria LeBlanc made sure Hay (one save) did not have many difficult chances.

At the Houlton Humane Society, we take adopting the cats and dogs in our charge very seriously.
Campaign Corner END_OF_DOCUMENT_TOKEN_TO_BE_REPLACED