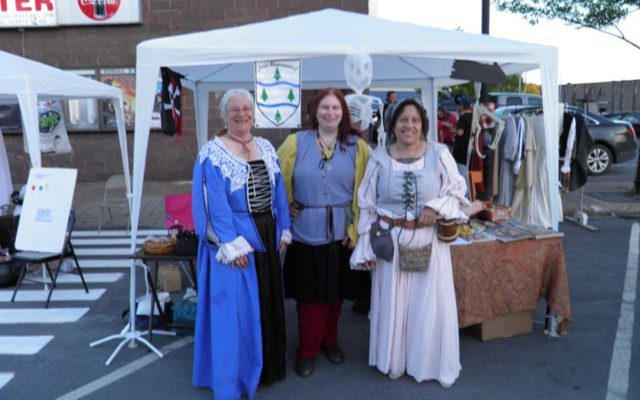 Limestone to host Renaissance Faire May 18-19

Chris Bouchard • May 12, 2019
In less than two weeks, the town of Limestone will revisit centuries old customs and host medieval markets as part of the May 18 and 19 Renaissance Faire.

LIMESTONE, Maine — In less than two weeks, the town of Limestone will revisit centuries old customs and host medieval markets as part of the May 18 and 19 Renaissance Faire.

The faire is part of the town’s sesquicentennial celebration, which kicked off in March.

Karralena Castaway, who sits on the Limestone Development Foundation Board and Twin Riverswood group, both of which played a significant role in organizing the event, said the bulk of the activities will occur on Saturday, May 18.

The Limestone Community School, located on 93 High Street, will open the gates from 10 a.m. until 5 p.m., where numerous activities will be featured inside in two areas dubbed “The Glen,” and “Merchant’s Row.”

Altogether the festival will feature 20 merchants and vendors, with The Glen focusing on mystical services such as “Reiki, empathetic readings, unique artworks, healing stones, as well as a faery named Thom Lily Thistle, who will be flitting about enchanting children and adults alike,” according to Castaway.

The Glen will also feature Academia Mystica, which consists of mini-classes in five categories relevant to the medieval and Renaissance period. Photos will be available “for a small fee with a pillory as well,” Castaway said.

Merchant’s Row, on the other hand, will feature herbs, botanicals, drinking horns, handmade soaps, hemp, chainmail jewelry, notions, and quilting demos. Quilting Around the Corner, a local quilting business that focuses on teaching residents how to quilt, will donate a quilt that will be on display in this section and raffled off for $5 a ticket or $10 for three tickets.

In the “General Arena,” Castaway said the “Angincourt Soldier” will conduct an interactive lecture about the life of a soldier in 1415. Also, a medieval martial arts troupe from Connecticut called the “Order of the Silk Road” will teach sword fighting techniques and perform two “tournament of Arms floor shows in the afternoon.” Twin Riverswood will also put on a bow staff demonstration and the Recycled Shakespeare Company will perform in the afternoon.

The festivities will cap off with Renaissance period dance instruction at 4 p.m., as well as a blacksmithing demo by Katsman Forge.

Admission on Saturday will cost $6 per adult and $4 per child, with children 2 and under admitted for free.

On Sunday, the festivities will move to Manaus Books and Coffee Shop on 30 Main Street and will kick off with a religious service and Gregorian Chant led by business owner Julie Weston. Following the chant, the coffee shop will host “Knights & Damsels Tea,” which will feature “activities for the young and young at heart along with refreshments and discussion about our organization,” Castaway said, adding that the quilt raffle winner will be announced at this time.

There is no admission fee for the Sunday events at Manaus Books.

Castaway said it has taken her “months of planning and getting things to come together to get to this point from initially being asked by the Limestone Development Foundation in March of last year to do this as part of the sesquicentennial celebrations.”

While Twin Riverswood typically hosts the Knights & Damsels Tea event annually, Castaway said this is the first time that she is aware of that the town as a whole has held a Renaissance Faire.

The Twin Riverswood group was formed in 2013, and primarily focuses on historical interest and education in the time periods of 645 AD to the mid-1600s. The group currently has 48 members, some of whom are located miles away from Limestone. Because of this, the group meets once a month from March to December, with a hiatus in January and February to avoid difficult winter travel conditions.

Anyone interested in joining the group can visit its official Facebook page or show up to a locally posted meeting or event, such as the upcoming Renaissance Festival.

Castaway said on Wednesday that the group still needs roughly $800 in additional funding to cover some of the upcoming venue fees for the festival, and that anyone interested in becoming a sponsor can either message the Limestone ME Renaissance Faire 2019 Facebook page directly or send her an email at karralenacastaway@yahoo.com.

For all it does to refresh us, burn energy and keep us sharp, we all need playtime, dogs and cats included. Sharing playtime with pets has the added benefit of strengthening the bond between us, so we better understand one another.
Campaign Corner END_OF_DOCUMENT_TOKEN_TO_BE_REPLACED