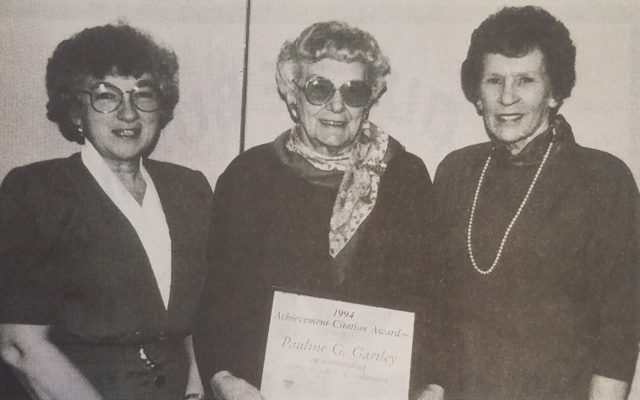 Contributed • May 29, 2019
The Presque Isle Chapter acknowledged with thanks the following gifts received: $107 from the Councilmen (Masons); also one layette from Normal School girls.

Red Cross notes — The Presque Isle Chapter acknowledged with thanks the following gifts received: $107 from the Councilmen (Masons); also one layette from Normal School girls. The ladies of the Red Cross were busy making gifts which were presented to the boys leaving for Camp Devens.

Red Cross Service — Mr. and Mrs. San Lorenzo Merriman were honored at a surprise dinner party at the Northeastland Hotel May 24. The affair was sponsored by the Presque Isle Chapter officers of the American Red Cross, the executive board and officers of the Presque Isle Branches, including Portage, Ashland, Mapleton, Crouseville, Washburn, Westfield and Mars Hill, of which Mrs. Merriman had been a staunch and faithful worker for many years.

New power system plan — Announcement of plans for a major interconnection of Canadian and American power systems was made by the presidents of Bangor Hydro-Electric, Central Maine Power and Maine Public Service companies. Subject to approvals of State, Federal and Canadian regulatory bodies, a 345,000-volt transmission line to be built from Fredericton, N.B. to Wiscasset, a distance of 230 miles, tying together the transmission systems of the Maritime Provinces and New England. The Maine portion of the project expected to cost about $18 million.

Most valuable — Vaughn Campbell and Eugene Brown were named most valuable players in soccer and basketball respectively during athletic banquet at Washburn High School.

County track title — The Presque Isle boys and the Caribou girls were both successful in defending their titles at Aroostook County Track Championships, held during a steady rain at the Skyway Middle School in Presque Isle. The Wildcat boys racked up 147 points to best second-place Caribou, who had 132-2/3. Fort Kent was third with 92-1/3, followed by Fort Fairfield (42), Hodgdon (30) and Limestone (28). Event winners for the Presque Isle boys were Shawn McPherson, who won the 110 meter hurdles with a time of 17.17 seconds; Luke Hutchins (100 meter dash, 11.34 seconds); Chris Turner and Ray DeMerchant (pole vault, tie-11 feet); Gary Bubar (triple jump, 27 feet, 5-1/2 inches) and the 400 relay team (46.73).

Teacher heads consortium — James Cushman, math and science teacher at Washburn District High School, was elected chairman of the Caribou Partnership Team of the Northern and Eastern Maine Tech Prep Consortium. The team consisted of representatives from schools in Caribou, Limestone, Washburn and Van Buren. There were similar teams located throughout the state of Maine with emphasis on subjects including English, Biology and Chemistry. The Caribou Partnership was first formed in 1992 and chose to work in the math area.

Scholar athlete — Tamera Blades was named a Scholar Athlete by the National Association of Intercollegiate Athletics. Blades was a member of the University of Maine at Presque Isle women’s basketball team.

Just when we thought we were out of the woods with kitten season, it has hit full force.  The past few days have been difficult answering the phone and hearing the stories of why people have litters of kittens they need to surrender.
Campaign Corner END_OF_DOCUMENT_TOKEN_TO_BE_REPLACED