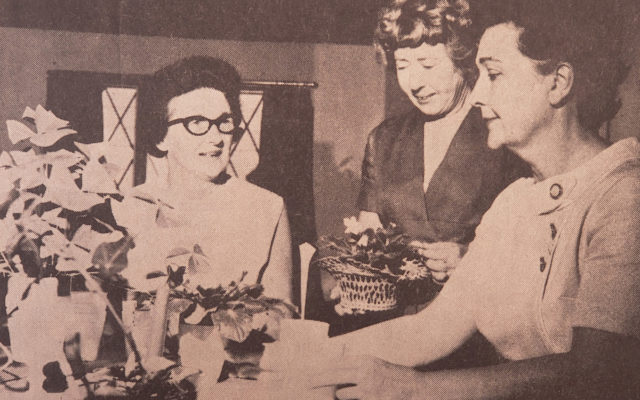 Compiled by Yvonne Tardie, Special to The County • August 16, 2019
Mr. H. J. Hutchins, of Bangor, the linotype expert in charge of the commercial plant, was in town superintending the installation of a new model 14 linotype in the Star-Herald office.

Installation of a new linotype — Mr. H. J. Hutchins, of Bangor, the linotype expert in charge of the commercial plant, was in town superintending the installation of a new model 14 linotype in the Star-Herald office. The new machine, which was the most modern and varied in efficiency of any, turned out by the Mergenthaler Linotype Company, was more fully described in the weekly issue.

Gift of $25,000 — Arthur R. Gould Memorial Hospital received a $25,000 gift from the estate of the late Mrs. Marie Gould Wildes, according to Robert J. Waldron, president. The daughter of the late Arthur R. Gould resided in Dallas, Texas. She stipulated that the money be used for equipment purchases. With this contribution, the Wildes family had given the hospital $135,000 in gifts and had established a Wildes Foundation valued at $200,000. Major contributions included a $100,000 payment toward the cost of the current building, and a $10,000 urology table. A $35,000 cobalt therapy unit was purchased with interest received from the foundation which also subsidized teh $25,000 cost of a radio-isotope laboratory.

Sweetser Club Champion — Steve Sweetser was the club champion for 1969 at the Presque Isle Country Club. He defeated Dewey DeWitt in the final 36-hole medal round, 147-148. Other titlists included Bryce Jordan, A Flight; Dick Maynard, B Flight; and Peter King, C Flight. Jordan had to go into sudden death before eliminating William O’Brien. The two finalists each carded 167 totals in regulation play, forcing the round into sudden death.

1995 snowmobile campaign — Aroostook County Tourism Inc. was awarded a $12,000 grant for a 1995 Snowmobile Aroostook campaign. The grant was funded by the Maine Tourism Partnership Program (MTPP) through the Department of Economic and Community Development, Office of Tourism. Snowmobiling pumps thousands of dollars into the area creating a significant impact on the economy during the winter. The previous year through the assistance of an MTPP grant, ACT conducted a promotional campaign in the county.

Area children at Camp Sebago — The Salvation Army’s Presque Isle Service Unit sent eight children from the area to the Army’s Camp Sebago in Standish during the summer. The youngsters were selected by members of the local service unit, volunteers in the area who also serve need families throughout the year. The Army thanked those who supported the mail appeal which enabled local kids to enjoy a week’s stay at camp. During the summer, over 1,400 children from Maine, New Hampshire and Vermont attend the camp.

Only one member of Maine’s congressional delegation had come out in favor of impeaching President Donald Trump ahead of House Speaker Nancy Pelosi’s Tuesday announcement that the Democratic-led House of Representatives would begin an impeachment inquiry.
Pets END_OF_DOCUMENT_TOKEN_TO_BE_REPLACED

We think a cat can make for the best pet in the world. To truly love a cat, you must learn to accept them for what they are -- unpredictable and quirky, which is something unique and unlike any other pet.
Campaign Corner END_OF_DOCUMENT_TOKEN_TO_BE_REPLACED