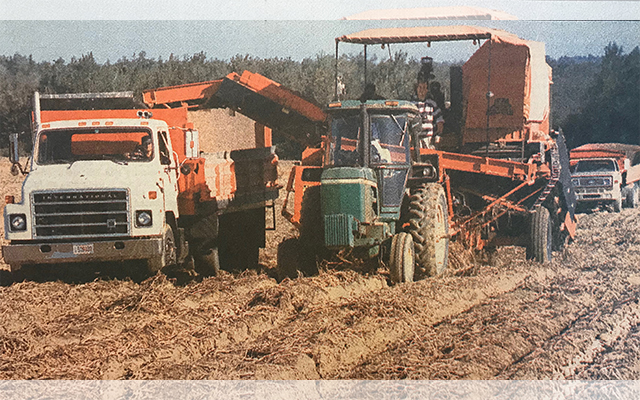 Reward offered — ‘Billy’ Guiou was offered a reward of $500 Tuesday, for the discovery of a Democrat.

Attends meeting — John B. McMann, Houlton, Asst Supt of the B. & A., attended a meeting of Railway Superintendents in Boston Monday.

Left for college— Vernon Saunders, who has been employed at the post office for the past year as window clerk, has resigned his position and left Monday for Boston where he will enter the Massachusetts College of Pharmacy.

On several weeks trip — Mrs. Ethel Sterling left recently for Boston, where she attended the Gift Show. She will also visit for a few weeks in Provincetown, Mass., and Montreal before her return.

Still growing — Hudson Berce held up a sugar beet taken from his field for inspection by Lew Roberts of Maine Sugar Industries and Stan Greaves of the Sugar Beet Growers Association. Mr. Berce has 100 acres of sugar beets planted this year and his fields were among those inspected during the two-day bus tour last week. The next month is expected to be the most important growing period for the best crop.

Music presentation — The Rev. Clovis A. Frame, president of the Houlton Community Chorus, presented to Mrs. Helen Atchison, librarian of Cary Library, one of the pieces of choral music being donated by his organization to the library. The collection contains approximately 61 titles, with 20 to 50 copies of each, making a total of about 2,700 individual pieces of music. The music was purchased by the Chorus for its own concerts and will now be made available to church choirs, schools or other organizations free of charge for up to a period of three months. Also there during the presentation was Mrs. L. B. Denton and Michael Clark, members of the chorus.

Winner — James Young, past noble of Rockabema Lodge 78, congratulated Lorraine Grimmer, who was the raffle winner of 100 gallons of fuel oil donated by Irving Oil Company.

Excellence — Houlton Regional Hospital has announced that Debi McCann, CCRN, was selected by her peers to represent HRH as the 1994 nomination into the Quorum Hall of Excellence. Nominations are based on criteria of excellence in person and profession; respect for people; service to others; commitment to improving the world around them; and quality of work. Participants are solicited from all Quorum-managed hospitals, reviewed by a judging committee in Nashville, Tenn., with three selected for induction on to the Hall of Excellence. Bradley C. Bean, administrator, presented Debi with a gift from Quorum, in recognition of her nomination and pursuit of excellence.

At the Houlton Humane Society, we take adopting the cats and dogs in our charge very seriously.
Campaign Corner END_OF_DOCUMENT_TOKEN_TO_BE_REPLACED