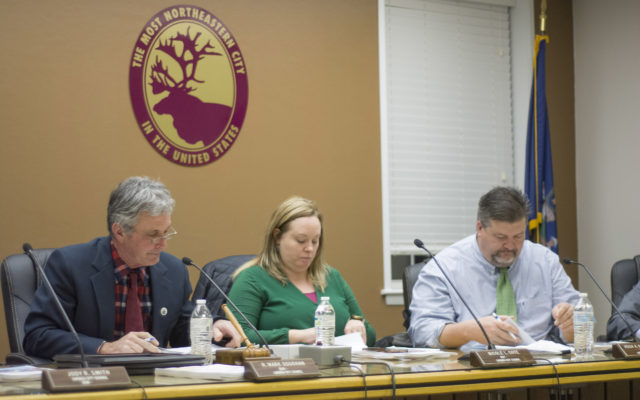 Chris Bouchard • December 13, 2019
Caribou City Councilors voted to approve next year’s expense budget after agreeing to take a close line-by-line look during a previous meeting and voting on each item of interest during their Dec. 9 meeting.

CARIBOU, Maine — Caribou City Councilors voted to approve next year’s expense budget after agreeing to take a close line-by-line look during a previous meeting and voting on each item of interest during their Dec. 9 meeting.

The resulting expense budget is $25,686 higher than last year’s amended expense budget, and $108,927 less than the budget councilors approved in December last year, before later amending the budget.

“For taxation purposes,” Marker said after the meeting, “the city’s mill rate should remain at 2019 levels, but we anticipate increased allocation requests from the County and RSU 39, which will cause a slight increase to the overall property taxes. We won’t know until June how much the tax rate will be affected.”

Six individual items were brought to the meeting after councilors looked through the draft budget: adding $4,600 for the Aroostook Area Agency on Aging; adding $50,000 for a senior tax credit program; reducing a stipend paid to the public works director for services at the airport by $8,000; adding $60,000 under the Capital Roads line for additional work on the severely damaged River Road; and adding $6,000 for part-time staffing at the Nylander Museum.

Councilors voted 6-1 in favor of funding the Aroostook Area on Aging, with Councilor Joan Theriault opposed.

They also narrowly accepted the motion to reduce the public works director’s stipend by $8,000 with councilors Theriault, Martin and Cote opposed.

Councilors did vote in favor of adding $60,000 for future repairs to the River Road in a 5-2 vote, with councilors Goughan and Jody Smith opposed.

The sixth item, adding $6,000 for part-time staffing at the Nylander museum, was also approved in a 5-2 vote, with councilors Goughan and Thomas opposed.

The final motion, adding $400 in funds for the Central Aroostook Chamber of Commerce, passed unanimously.

Before approving the budget, the council held an executive session in which they discussed fire and ambulance contracts with outside communities, as well as collective bargaining agreements with the police and public works unions. Once councilors left executive session, no actions were taken on these items and they voted to approve the budget based on the changes made during public session.

Marker said that he is in the process of setting up meetings with neighboring communities currently served through fire and ambulance contracts, and that the city is still in negotiations with the public works department. The police contract, he said, will likely be voted on during the council’s first regular meeting of 2020 on Jan. 13.

Looking ahead, the city manager said the council will not hold any additional meetings this year “unless an urgent matter arises.” Their next meeting will be held on Jan. 2, which is its annual organizational meeting, and will primarily involve appointing newly elected councilors and voting for one councilor to be the mayor.

Many of you have been following Luke's story on our Facebook page. Luke came to the Ark last July with his sister Lydia at 8 weeks old. Both Luke and Lydia were in really bad shape with untreated upper respiratory infection.
Campaign Corner END_OF_DOCUMENT_TOKEN_TO_BE_REPLACED