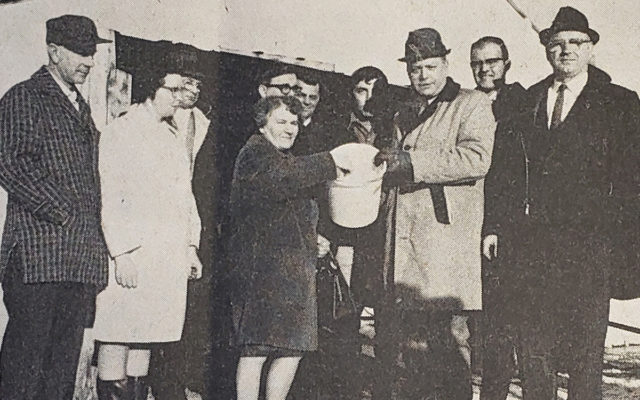 Compiled by Yvonne Tardie, Special to The County • January 2, 2020
Dr. Albert Parkhurst, son of Mr. V. D. Parkhurst, who was in the Mass. General Hospital on its staff of officers, arrived home Saturday to spend Christmas

Dr. Parkhurst spending Christmas in town — Dr. Albert Parkhurst, son of Mr. V. D. Parkhurst, who was in the Mass. General Hospital on its staff of officers, arrived home Saturday to spend Christmas. D. Parkhurst entered the Mass. General ten months ago as one of the hospital staff, and had two more months to stay, after which he purposes taking a 6 months course in the Boston Lying-In Hospital, one of the leading institutions of its kind in the country. Dr. Parkhurst was a graduate of Bowdoin, class of 1913 and of the Harvard Medical College, standing third in his class at Harvard.

Local hospital recipient of several gifts — A gift of a number of volumes from the private library of the late Dr. A. B. Hagerthy and several pieces of valuable medical equipment were presented to the Presque Isle General Hospital by Mrs. Hagerthy of Ashland. The deep-freeze unit placed in the hospital by the Civilian Defense Council by blood plasma storage was presented by the Council as a permanent gift to the hospital.

Dr. Hull re-appointed to Bay State office — State House, Boston, Dec. 21, Governor Leverett Saltonstall’s only nomination to the executive council was the re-appointment of Ira D. Hull, M.D., of Gloucester, as medical examiner, first district, Essex County. Dr. and Mrs. Hull were residents of Presque Isle for a number of years, and two of their children, Dana and Jack, were born in this city, at the time Dr. Hull was practicing here. His many friends in this vicinity congratulated him on his re-appointment.

4-H Club Foundation Fund increased by Angus resale — A group of Ashland officials, country 4-H Club leaders and other interested people met at Sal-Mor Farms beef operations site in Masardis to determine who would be the recipient of an Angus steer all processed, cut, wrapped and frozen, ready for the freezer. The beef steer was awarded to Maurice McGillicuddy, RFD 2, Houlton. “Aroostook County had raised so far a total of $1,747.25 for the Pine Tree State 4-H Club Foundation, all from activities centered around this one Angus beef steer,” announced Alban Cyr of Caribou, the chairman for the Foundation activities for The County.

Scott Coffin appointed to border patrol — R. Scott Coffin, 22, of Presque Isle, graduated from the United States Border Patrol Academy at Los Fresnos, Texas, and was ready to perform his duties as a patrol inspector in the Chula Vista California Border Patrol Sector. Patrol inspector Coffis was a member of the 94th Session of the Border Patrol Academy and was one of 98 new officers successfully completing their intensive academy course in immigration and nationality laws and regulations, Spanish language, duties and authority to act, court procedures, civil rights, physical training and other studies involving the duties of patrol officers.

Mars Hill students played the market and won big — Central Aroostook High School’s Stock Market Team, headed by Heath Bartley, took first place in the statewide competition. After they had finished researching several possible stocks, the team decided on AST Research as their collection. Although it started off slowly, it recovered and shot up to take the lead. Sources such as Value Line and the Wall Street Journal came in very useful on the team’s quest for victory. Adam Henderson, also a captain at CAHS, took second place in the competition, using Fedders as his stock. Students from Thornton Academy came in a distant third. Steve Boyd, also a CAHS student, finished fifth.

Growers donate 23 tons of produce to feed hungry — The Maine Department of Agriculture announced major cuts in the federal food assistance programs that provide emergency food to Maine’s soup kitchens and food pantries. Congress cut the food purchase budget for Temporary Emergency Food Assistance Program 72.5 percent for the 1995 fiscal year. McCormick said donations of approximately 10,000 pounds of potatoes from Chip Beckwith of Fort Fairfield, an equal amount of potatoes, carrots and turnip from Bud Ayers of Caribou and 40 boxes of fresh apples donated by Norman Chick of Chick Orchards in Monmouth were made. The donations from Ayers and Beckwith were arranged by Gary Ennis of Maine Catholic Charities in Caribou. In addition, Ray Wotton of Monticello donated 25,000 pounds of potatoes that were picked up and delivered to Augusta by the Maine Army National Guard via a refrigerated semi-trailer donated by to the department by Maine Motor Transport Association.

Well, normally this time of year we would be gearing up for our annual “Paws for the Cause” walk.  Families and their furry companions would be showing up with generous pledges in hand, ready to enjoy an easy two-mile walk and then some welcomed refreshments afterward.
Campaign Corner END_OF_DOCUMENT_TOKEN_TO_BE_REPLACED