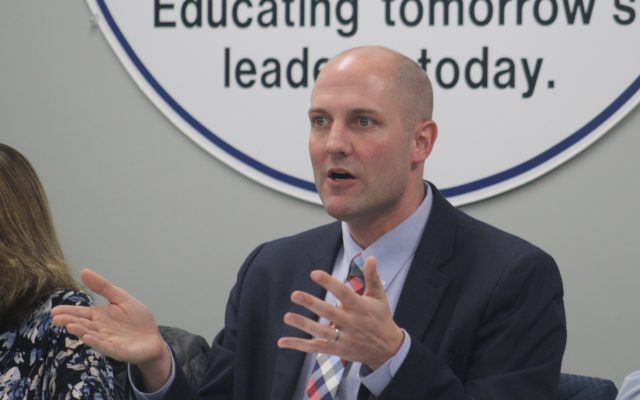 David Marino Jr. • March 18, 2020
SAD 1 Superintendent Ben Greenlaw and the school board announced the results of an energy audit, and weighed in on the COVID-19 pandemic, at a school board meeting held Wednesday, March 11.

PRESQUE ISLE, Maine — SAD 1 Superintendent Ben Greenlaw and the school board announced the results of an energy audit, and weighed in on the COVID-19 pandemic, at a school board meeting held Wednesday, March 11.

The meeting came several days before the district announced it would be switching to online courses from March 16 to March 27 due to the COVID-19 pandemic. At the time of the meeting, school officials said there were no plans to close schools and that they were making efforts to prevent the spread of the virus.

That would change by Sunday when every school in Aroostook County announced closures.

The most substantial policy moment of the day came when staff members of Siemens announced the result of a months-long energy audit by the multinational company, primarily taking place at Presque Isle High School. The board first announced the review at a school board meeting in December.

Siemens employee Tom Seekins said the total cost of the renovations would be $4,041,020. Subtracting the $142,592 subsidy the company expected to get from Efficiency Maine for sustainable practices, he said the upgrades would cost the district $3,898,427.

Seekins portrayed the renovations as changes that would help sustainably modernize Presque Isle High School, with the installment of new LED lights, faucets, boilers, pumps and ventilators. He said the district would save more than $100,000 in energy costs each year.

Greenlaw praised the potential changes, saying it was part of a long-running trend in the SAD 1 school system to renovate buildings within the district. He said the district should not let the high school “crumble around us” by refusing to modernize it.

“We haven’t done much to the bones of this thing in a long time,” Greenlaw said. “It’s a big price tag, it’s a cost, but it’s an all-in decision for us in committing to improving this building for the next 20 years.”

The board did not make a decision on the renovations at the meeting.

SAD 1 Health Services Director Deb Raymond gave a presentation on COVID-19, amidst an increase in headlines and fears about virus spread across the United States. She said custodians had increased cleaning within district schools, and that they were keeping track of the rates of illnesses among students.

Greenlaw said that teachers would meet for workshop days on Monday and Tuesday, with plans to begin distance learning on Wednesday. He said lunch programs would continue during that period, with meals available for pick-up at the main entrances of schools.

“There are no novel coronavirus cases in our schools,” Greenlaw said. “But, we feel … it is in the best interests of the health and safety of the MSAD 1 community to close at this time.”

The board also voted to eliminate two teaching positions: one at Presque Isle High School and one at Zippel Elementary School.

“We have an obligation to look at every opening that we have, and make a determination on whether or not the job is necessary,” Greenlaw said.

The board also voted to eliminate a special education teaching position at Zippel Elementary School, with the teacher moving to the high school, as part of a broader downsizing of the self-contained special education program at Zippel, which currently contains eight students.

Greenlaw said two ed techs would also be let go as part of that downsizing process.

The next SAD 1 meeting will be held at 5:30 p.m. April 15 in the boardroom at Presque Isle High School. There will also be a budget workshop at 5:30 p.m. on April 8. in the same location.

About 30 members of the public attended the meeting.

At the Houlton Humane Society, we take adopting the cats and dogs in our charge very seriously.
Campaign Corner END_OF_DOCUMENT_TOKEN_TO_BE_REPLACED