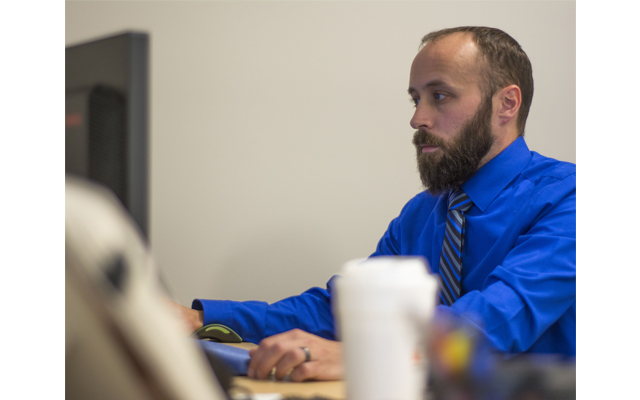 Chris Bouchard • August 8, 2017
Just a couple weeks after hiring Barrett Fisher as a Veteran Service Officer, the Maine Bureau of Veterans’ Services moved its Caribou office from the Northern Maine Veterans’ Cemetery to the same building as the Bureau of Motor Vehicles on the Access Highway.

CARIBOU, Maine — Just a couple weeks after hiring Barrett Fisher as a Veteran Service Officer, the Maine Bureau of Veterans’ Services moved its Caribou office from the Northern Maine Veterans’ Cemetery to the same building as the Bureau of Motor Vehicles on the Access Highway.

The new office, which can be found at the back of the large yellow government building next to the Melody Roller Rink, has a lobby and conference room, with Fisher’s office being the first door visible from the entrance.

With the exception of a formal sign, the office appears finished. Fisher said a sign is coming soon, but is not sure when exactly it will be installed. For the time being, a piece of paper with the words “Bureau of Veterans’ Services” is taped to the inside of the glass door.

Fisher brings over a decade of military experience to the position, and served on active duty for more than 13 years in the Army Military Police Corps, and deployed to Iraq and Afghanistan during that time.

“I was a sergeant first class in the Army,” Fisher said,” and the first job I got after leaving was putting in garage doors for ten bucks an hour; it was quite a change.”

Fisher later worked at the National Guard Armory as a family assistance specialist, where he worked with a number of partnered military organizations.

“At the armory, you essentially refer people to other agencies,” Fisher said. “Here, you can do a lot more than that. You work through claims and get to see the end result.”

“Some veterans come in and they’ve never filed a VA claim for any injuries or disabilities that they’ve incurred from their service,” Fisher said. “We do all of the paperwork and send it into the VA, so they can get their evaluations.”

A native of New Sweden, Fisher joined the Army after completing one semester at Northern Maine Technical College (now Northern Maine Community College) and working as a certified nursing assistant at the Maine Veterans Home.

“My Dad retired from the Navy, and it was ingrained in me that if you’re an able bodied person, joining is the right thing to do,” said Fisher.

Being in the military has helped Fisher prepare for the communication aspect of the job. He said there is an “instant brotherhood” felt when speaking to other veterans.

“Even if you’ve never met or talked to them before,” Fisher said. “There’s an instant connection.”

Fisher said the job has become more manageable since he first started in the position of veteran service officer in mid-June.

“The first few weeks were like drinking from a firehose,” Fisher said. “I have a better grasp now, but still have a lot to learn.”

Fisher refers to “Federal Veterans Laws, Rules and Regulations,” a massive reference manual that is more than 2,000 pages long, when filing claims. His copy of the book is filled with tabs to assist with commonly asked questions, and he said he likely will be adding more tabs during his time as service officer.

For his first two weeks, Fisher was located at the Northern Maine Veteran Cemetery before the transition to Access Highway. He could not comment on why the office was moved.

“That’s not my lane,” Fisher said. “The move was put into place before I started. I was there for about a week and a half, and we were waiting for furniture to be moved.”

Fisher said he couldn’t give an exact number of how many local veterans he has seen so far, but said that about five or six come in on a daily basis.

“It was a little slow when we moved out of the cemetery,” Fisher said, “but now that people know where we are, and once the sign gets put up, I’m sure it will pick up even more.”

To Fisher, the most rewarding aspect of the job is being able to help his fellow veterans.

“It’s nice to see them leave here with a better understanding of what’s available,” Fisher said. “There are a lot of benefits out there, and quite a few veterans don’t know they’re there.”

June is generally a month that also marks the height of “kitten season,” when large litters of kittens are born and often end up in animal shelters.   Luckily, here at the Central Aroostook Humane Society, we have seen a dramatic drop in the cat population over the past five years, mostly due to our spay and neuter program.
What's Happening This Week END_OF_DOCUMENT_TOKEN_TO_BE_REPLACED