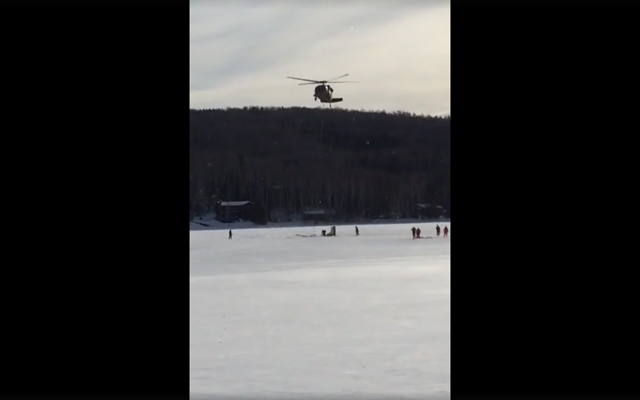 Jessica Potila • December 22, 2017
A Fort Kent man on Friday captured video of a Black Hawk helicopter retrieving a Maine Warden Service plane that went through the ice on Eagle Lake earlier this week.

The Cessna 185 equipped with skis broke through the ice just after 11 a.m. on Dec. 20 as warden pilot Jeff Spencer was returning from a bear telemetry flight. The warden service reported that the ice thickness near the base had been checked on Dec. 18 and determined safe for aircraft operations. Strong winds on Wednesday, however, caused the pilot to alter his normal landing pattern on the lake.

“After landing, Pilot Spencer proceeded to taxi across the ice toward the Warden Service Plane Base located on the west shore of Eagle Lake,” Cpl. John MacDonald of the warden service said in a press release on Wednesday night . “While taxing, Pilot Spencer crossed an area of thin ice and the aircraft broke through.”

Spencer was able to exit the aircraft without injury, but the plane became partially submerged and was suspended by its wings and tail.

George Dumond, who used to pilot fixed wing single engine airplanes, captured the plane recovery operation on his cell phone from the shore near Route 11 on the lake’s west side.

“The recovered airplane was hoisted to the warden plane base on Eagle Lake and not many people were allowed in that area for safety reasons. I did notice that vehicles were parked by the road on both sides of the lake observing the action,” he told the Fiddlehead Focus Friday afternoon.

Dumond said the operation appeared to be a success and “there were quite a few people on the ice helping to cut and chip away at the ice.”

“The plane did not appear to have much physical damage but I can assure you that the plane’s avionics were most likely destroyed due to being submerged under water,” he said.

Maine Warden Service Chief Pilot Jeff Beach stated in a press release issued late Friday afternoon that the plane was recovered without incident and “it appeared the aircraft sustained no structural damage.

“The engine and avionics are currently being dried in the Warden Service hangar at Eagle Lake. Critical components will be assessed for any possible damage in the coming weeks,” according to the release.

Dumond also said he saw some men from a waste recovery company in the area. He assumed they were there to recover any fuel or oil that might spill during the recovery effort, but added that it “looks like none of that happened.”

He said someone on the scene told him the warden service waited a few days for the cold weather to add several more inches of ice to the lake before having crews go out on the lake and attempting to recover the plane.

The plane is one of four aircraft operated by the warden service.

The Eagle Lake Plane Base has been in operation since 1949 and ski equipped aircraft have been used by the Warden Service since the 1940’s for biological, search and rescue and law enforcement operations, MacDonald said in the earlier press release.

Members of the Houlton Band of Maliseets will head to the ballot box in order to determine who will be elected as their new tribal chief.
Pets END_OF_DOCUMENT_TOKEN_TO_BE_REPLACED