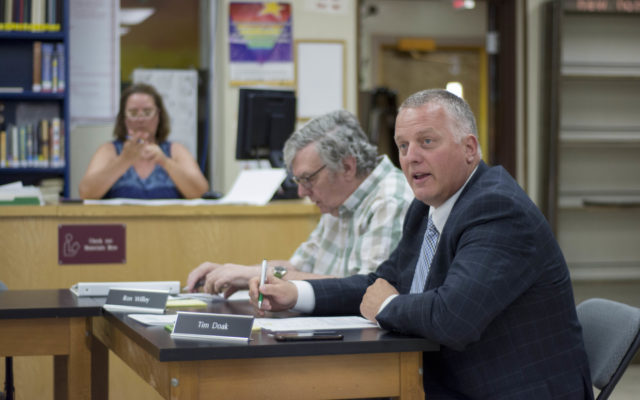 Chris Bouchard • July 13, 2018
The Maine Board of Education has approved an additional $4.8 million for Caribou’s new $45 million pre-kindergarten to eighth grade school project that was jeopardized in May

CARIBOU, Maine — The Maine Board of Education has approved an additional $4.8 million for Caribou’s new $45 million pre-kindergarten to eighth grade school project that was jeopardized in May when the only bid on construction came in at $49 million.

Since that bid came in, officials with the RSU 39 school board, new school building committee, PDT Architects in Portland, and state board of education have worked with the contractor, Bowman Constructors of Newport, to bring the building price down to $41.7 million.

Out of the project’s entire budget, $37 million was set aside for construction while the remaining funds covered the cost of demolition of existing school buildings, architect and legal fees, surveying and ground work.

Even with the newly negotiated construction price, however, school officials were still about $4.7 million short, but RSU 39 Superintendent Tim Doak confirmed during a Thursday school board meeting that the state board of education approved roughly $4.8 million to cover the difference.

The next step in the process involves holding a referendum vote on Sept. 6 in RSU 39 member communities (Caribou, Limestone, and Stockholm) to ask voters to approve the additional funding. Doak emphasized on July 12 that there is “no additional tax requirement” associated with approving this funding, as it will come from the state.

If voters do not approve the additional funding, the project still will move forward but with some major changes. For instance, the new school would not include new furniture or a biomass boiler, which PDT Architects estimated would save the school district roughly $45,000 to $48,000 in annual energy costs. Also, Teague Park Elementary School would not be demolished, meaning the new school would not have its own athletic field.

Doak said the school will hold a community forum in early August during which he and other officials will give a presentation regarding the current state of the project and answer questions from the public, ensuring that residents are informed prior to the Sept. 6 referendum.

An official groundbreaking ceremony for the new school will occur at 9 a.m. on Aug. 3, according to the superintendent.

Looking ahead, Doak told the local school board members Thursday that construction should begin in roughly one week, adding that he is excited to see the project come to fruition.

Doak said hearing the bulldozers roaring “will be music to my ears.”

Just when we thought we were out of the woods with kitten season, it has hit full force.  The past few days have been difficult answering the phone and hearing the stories of why people have litters of kittens they need to surrender.
Campaign Corner END_OF_DOCUMENT_TOKEN_TO_BE_REPLACED