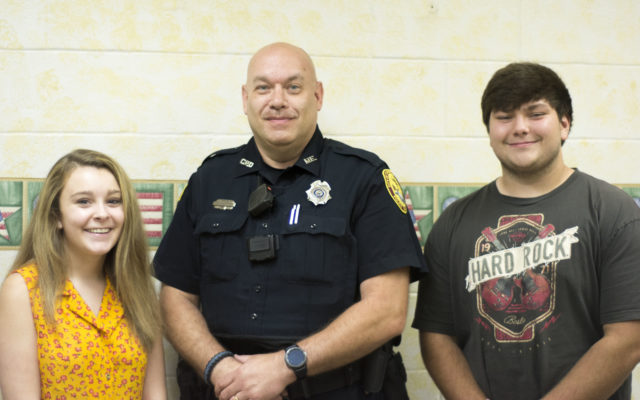 St. Peter, a veteran of the Caribou Police Department, greeted students and staff on Monday as they came to school on his first day in the new position. He then worked with high school staffers to equip his office, located in the main lobby, with a computer, phone, and a large flat screen TV that will broadcast live camera footage of the school.

He spent the previous week attending a 40 hour class in Augusta training to work in schools, and said his primary motivation for applying was the opportunity to interact with students and make a positive impact.

Over the years, St. Peter has given numerous presentations in local schools, teaching younger students about the dangers of drugs and giving internet safety instruction to middle schoolers and high school students.

St. Peter’s duties within the school system are mostly similar to his work with the Caribou PD, with the key difference being that he now has an opportunity to make connections with students, and to ideally play an active role in preventing crime before it occurs.

Reactions to the new resource officer have, on the whole, been positive so far.

“I greeted the kids coming in this morning,” said St. Peter. “Some were kind of shy and some said, ‘Hi,’ right away. Several staff members have already walked up to me and shook my hand. I think it’s going to be a good thing for the school.”

Like any other police officer, St. Peter is equipped with a gun and handheld radio. He also is legally able to search school property as long as he is acting in conjunction with school administrators.

CHS Seniors Wyatt Taggett and Emily Michaud said they believe the addition of the resource officer will be beneficial to the school.

“I heard they were going to start doing this, especially now with the new super school coming in,” she said, referring to the pre-kindergarten to eighth grade complex that officials broke ground on earlier this month.

“I’d heard about it,” said Taggett in reference to the new resource officer position, “but I didn’t know if it was going to come true. I think it’s a good thing, better than not having anything at all.”

Michaud said that with widespread reports of crime and shooting incidents in schools around the country, the officer will provide students with a “safer environment” and “someone we know who is here, and who can help us.”

They said that other students seem to be optimistic about the officer as well.

“Most of my friends don’t see it as a concern,” said Taggett. “They think it’s a good thing.”

“I’ve heard positive feedback as well,” Michaud said. “I don’t think anyone is against it.”

“The good thing about Kevin is that he’s very personable,” said Barnes. “He’s already starting to talk to kids in the hallways and becoming familiar with school customs. I don’t think it’s going to take very long for him to make an impact, and we’ll see the benefits of that every day.”

The principal added that Maine has been statistically very fortunate to not have had a school shooting or violent incident, but that the prevalence of these events in national news can distract students from their education, which should be their top priority.

“Education is taking a second seat if students are worried,” he said. “Having Kevin here helps with that, and obviously there are other ways that we’ll utilize his services,” adding that St. Peter also will serve as a counselor to students.

Reed Nonken, a teacher at both Caribou High School and the University of Maine at Presque Isle, has years of experience as a police officer and still serves in Limestone when the department is “in a pinch,” he said.

“I’ve worked with [St. Peter] and know him well,” Nonken said Monday. “Having him working in-house will be beneficial, and it’s a great resource just from an academic perspective.”

Nonken said his impression of the student reaction so far has not been “tremendous one way or the other.”

“I was hoping for some grand statement,” he said. “Like, ‘Oh my gosh we needed this so much,’ or, ‘Oh my gosh this scares me.’ I have two 10 year olds going to Limestone Community School, and when a uniformed officer showed up, it startled them at first.”

Nonken said he hopes to see students obtain an educational benefit from St. Peter’s presence, as he could assist with safety-related training, He also hopes for benefits in terms of community relations.

“Maybe they’ll get to know and understand police officers in a different way,” Nonken said of students, “and maybe that will help foster a better understanding. That’s what I see as the greatest benefit.”

He added that the counseling aspect of St. Peter’s position could potentially lead to the prevention of a crime or dangerous incident before it occurs.

“It’s rare that we drive by and catch someone before they commit a crime,” Nonken said. “There are so few opportunities for us to become proactive, and a full-time proactive connection is golden. We can’t do anything better for this age group than to have an SRO.”

Just two hours into his first day, St. Peter said he was looking forward to his future at Caribou schools.

“There’s a little anxiety because this is something new,” he said. “The last 27 years has been dealing with unknown calls and a routine. It’s going to take a little bit to get adjusted, but this should hopefully be a good fit.”

Maine is more than eight months into Medicaid expansion under the federal Affordable Care Act and trends around who is enrolling and where they live are starting to emerge, bucking some expectations and pointing out access challenges.
Pets END_OF_DOCUMENT_TOKEN_TO_BE_REPLACED