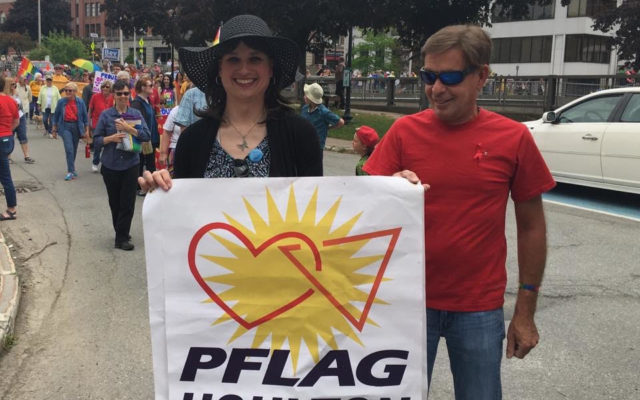 Joseph Cyr • January 10, 2019
While attitudes toward lesbian, gay, bisexual and transgender people have come a long way, supporters say there is still much work to be done in Aroostook County to increase acceptance for those individuals.

HOULTON, Maine — While attitudes toward lesbian, gay, bisexual and transgender people have come a long way, supporters say there is still much work to be done in Aroostook County to increase acceptance for those individuals.

PFLAG Houlton is the Aroostook County chapter of the national PFLAG organization supporting lesbian, gay, bisexual, and transgender (LGBT) people, their families, and friends. The next closest chapter of PFLAG, which stands for parents, families and friends of lesbians and gays, is in Bangor.

The idea for the national group began in 1972 when Jeanne Manford marched with her son Morty in New York’s Christopher Street Liberation Day March, which served as the precursor to today’s Pride parade.

The Aroostook County chapter was founded about five years ago by a handful of community members looking to support their LGBT loved ones through education and advocacy. Though the non-profit organization is unaffiliated with any religious or political institutions, many of the PFLAG-Houlton members come from the faith community.

“We realize this is a sensitive topic for many people,” said Dale Holden, one of the lead members of Houlton’s group. Holden, who served as the pastor at the First Congregational Church, became interested in the group to help support one of her adult daughters who is lesbian. “Our church went through a process to become an ‘Open and Affirming’ church, which meant we welcomed diversity. We support LGBT people as best we can.”

In June 2015, the Houlton group became officially recognized by the national PFLAG organization. The group meets at 6 p.m. on the third Wednesday of each month at the Cup Café in the basement of the Unitarian Universalist Church on Military Street. Meetings are confidential and open to anyone.

Membership is small, Holden said, with only about seven individuals attending regularly, but it has grown in the past year. Efforts to spread the word about the fledgling group have been done through information booths set up at the Houlton Agricultural Fair or at Houlton’s Potato Feast Days craft fair.

“At first, people kept their distance,” Holden admitted as many in the local community were either unsure what message they were promoting or were simply opposed to the idea.

In 2018, however, Holden said she noticed a shift in attitudes.

“Last year, we had a booth at three different events and my goodness, we had lots and lots of people come up to us,” she said. “They would ask questions and take pamphlets and many even gave us donations. There really has been a change.”

Many of those who approached members stated they had a son or daughter or other loved one who was gay and were looking for ways to be supportive. Some even came forward to say they were gay.

“You can’t tell if a person is gay or straight,” Holden said. “We exist for support, education and advocacy.”

The group also branched out to other areas in 2018, with some members marching in two parades representing PFLAG Houlton — the Bangor Pride Parade and the Fort Fairfield Potato Blossom Parade.

“We were encouraged with the amount of vocal support we got from onlookers at Potato Blossom,” said Sarah Bosse, one of the group’s members. “We are also helping MaineTransNet’s (MTN) efforts to start transgender support groups in Presque Isle and Houlton in 2019. This effort is part of carrying out their initiative of supporting transgender persons of all ages throughout the state.”

Additionally, the group is working with GSTAs (gay, straight, transgender alliances) in local schools to host a County-wide alternative prom this spring for LGBT high school students and their allies.

“And finally, in 2019 we hope to increase our community advocacy regarding the harm associated with conversion therapy, as well as AIDS/STD awareness and prevention,” Bosse said.

June is generally a month that also marks the height of “kitten season,” when large litters of kittens are born and often end up in animal shelters.   Luckily, here at the Central Aroostook Humane Society, we have seen a dramatic drop in the cat population over the past five years, mostly due to our spay and neuter program.
What's Happening This Week END_OF_DOCUMENT_TOKEN_TO_BE_REPLACED