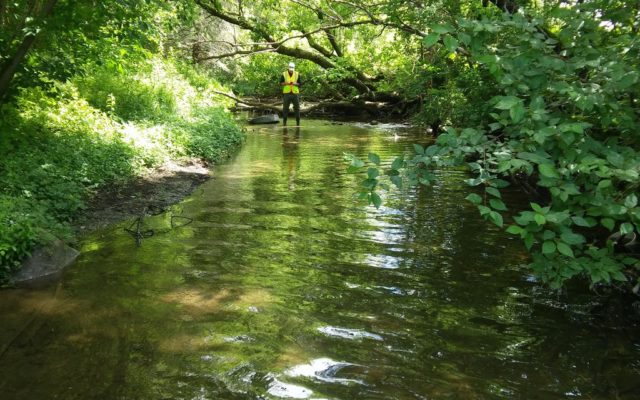 Kennedy Brook — a one-mile long stream that flows from the east side of Route 10, travels through Mantle Lake Park, and ends at the Presque Isle Stream — has failed to meet state environmental standards in recent years.

In addition to Mantle Lake Park, other public properties located near the watershed are Pine Street Elementary School, the Sargent Family Community Center, and Riverside Park, where runoff drains directly into both Kennedy Brook and Presque Isle Stream. The nearby Alder Brook is considered a tributary to Kennedy Brook, situated near land that includes the University of Maine at Presque Isle and the University of Maine Research Farm.

According to the official plan put together by Portland-based FB Environmental Associates, Kennedy Brook has failed to meet Class B standards set forth by the Maine Department of Environmental Protection since 2012. Maine’s Water Classification Program states that Class B waters are those that are suitable for activities such as “drinking water supply after treatment, fishing, agriculture, recreation in and on the water” and “as a habitat for fish and other aquatic life.”

Starting in 2016, city officials have worked with FB Environmental Associates to conduct a study on the water quality of Kennedy Brook, which they say has been in decline since the mid-2000s. The city received a $42,000 grant from the Maine Department of Environmental Protection that went toward the $52,000 study, with the municipality covering the remaining costs.

Much of the decline in water quality for Kennedy Brook is attributed to factors such as snow removal chemicals that include chlorine and salt, and agricultural chemicals that have run off into the water, according to research conducted by FB consultants. FB Environmental Associates completed the study in 2018 and submitted a draft of the proposed plan to the City Council in December.

After further discussions with a technical advisory committee that included city officials, representatives from the Maine DEP, the Natural Resources Conservation Service, the Central Aroostook Soil and Water Conservation District and UMPI’s science faculty, FB consultants completed and submitted an official plan to the Presque Isle City Council for approval in early 2019. FB consultants estimate that formal actions to improve the water quality of Kennedy Brook will cost between $31,500 and $58,450 per year over the next 10 years.

Kathy Hoppe, of the Maine DEP’s water conservation division, recommended during the March 6 council meeting that the city apply for state and federal environmental grants to help fund more substantial projects, such as realigning stream crossings, establishing stream bank buffers, and installing stormwater retrofits and/or vegetative filter systems.  The FB study found that the 2,400-foot downstream portion of Kennedy Brook is in the most dire need such efforts.

Meanwhile the upstream portion of Kennedy Brook, they write, could be fixed through less expensive projects such as optimizing de-icing machines to use only a minimum amount of salt necessary, relocating snow dumps further from the stream, and reducing fertilizer application. The one major project for that section of Kennedy Brook might involve replacing the culvert near Pine Street Elementary School with a bridge running the full length of the channel so that water flow is not interrupted for aquatic organisms.

Council chair Mike Chasse asked Hoppe whether approving the FB plan would place the city under a formal agreement with the Maine DEP to clean the watershed or if the plan was simply a recommendation for how to go about the management plan.

“Think of the plan as a menu where you can choose certain options based on what you feel is necessary,” Hoppe said. “There’s no formal obligation, but the plan does recommend certain goals that the city could meet to improve water quality and who should be involved.”

Councilors expressed support for the suggestions put forth by the management plan and voted unanimously to approve the plan.

As part of an action plan, FB recommends that the city form a stewardship committee to administer a formal Kennedy Brook watershed management program, which could include elected officials, agricultural landowners, local business owners, the Maine Department of Transportation and school officials. The firm also suggests the city reach out to UMPI science faculty and students to incorporate the monitoring of Kennedy Brook water quality into their research activities.

Official goals for the management plan include: restoring Kennedy Brook’s water quality and protecting the watershed from future negative impacts; improving in-stream habitats through restoration projects; and identifying and reducing sediment and nutrient inputs from agriculture and development.