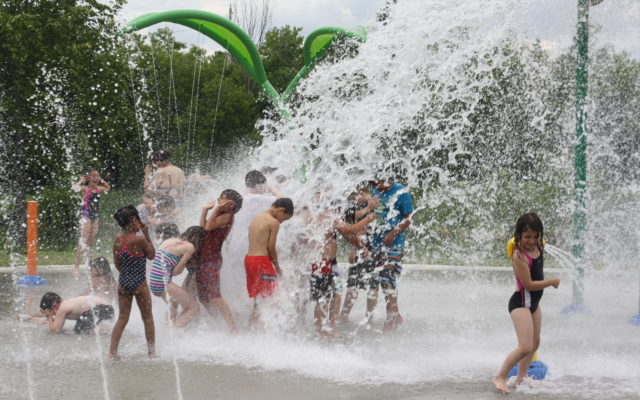 Melissa Lizotte • July 20, 2019
Summer 2019 marks the first year that both the brand new splash pad and community playground have been open to the public at the Riverside Bicentennial Park in Presque Isle, leaving residents and city officials excited about the greater variety of recreational opportunities.

PRESQUE ISLE, Maine — Summer 2019 marks the first year that both the brand new splash pad and community playground have been open to the public at the Riverside Bicentennial Park in Presque Isle, leaving residents and city officials excited about the greater variety of recreational opportunities.

Riverside Bicentennial Park, which contains both the playground and splash pad, sits near the intersection of Riverside Drive and Chapman Road, where the Sargent Family Community Center is located. While the splash pad was open for the entire summer in 2018, the opening of the playground was pushed back to last September due to delayed delivery of equipment.

But with both facilities now open and fully functional, Presque Isle Recreation and Parks director Chris Beaulieu said that he and staff members have seen an increase in visitors during the summer months.

Although exact figures are not available, Beaulieu estimates that between 50 and 300 people visit the playground and splash pad every day depending on the weather.

“It’s really been a great thing for the community,” Beaulieu said. “We’ve had folks from all over Aroostook County utilize the facilities, which has been good for area businesses.” 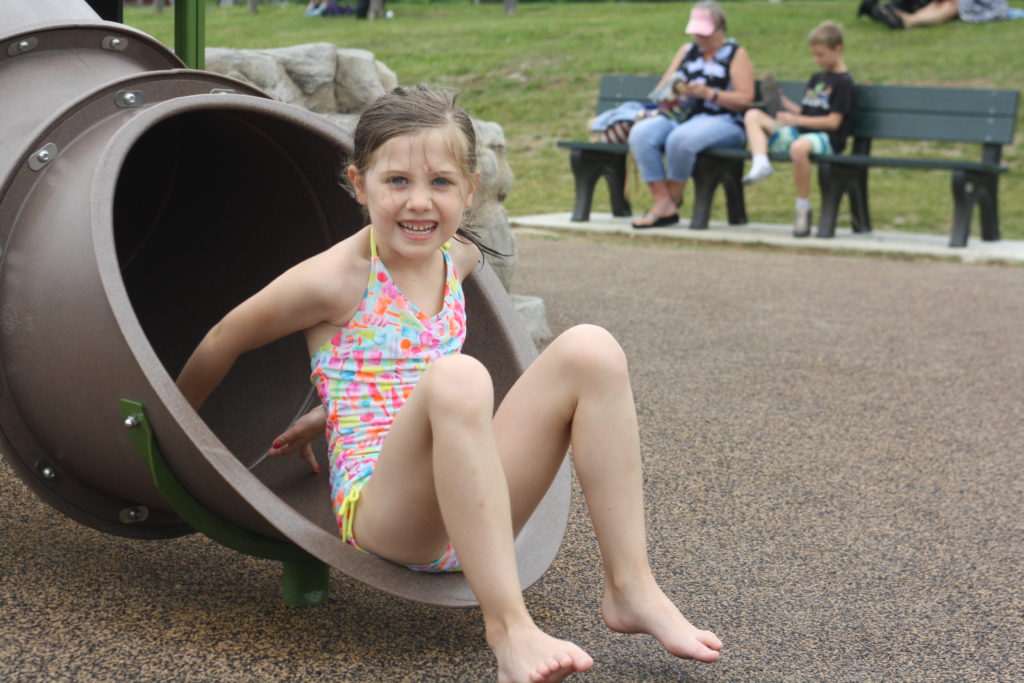 Noel Blaikie, 5, pops out of a slide at the new community playground in Presque Isle on July 17. This summer marks the first full season that the new playground is open to the public, along with the new splash pad, on Riverside Drive.
(Staff photo/Melissa Lizotte)

Though the playground opened for the season after the majority of snow melted, the splash pad opened in early June due to the cooler spring weather. Since then numerous local families have made up for the long winter by taking their children to the play areas.

On July 17, which proved to be another humid day for central Aroostook, Christine Blaikie of Presque Isle visited the playground and splash pad with her children Eli, 9, Noel, 7, and Aaliyah, 5.

“We usually come here once a week,” Blaikie said. “I love all the new features here and how both the playground and splash pad are close to one another.”

The playground includes features such as a jungle gym, swings and slides that are aimed for children from infant to age 12, as well as a “poured-in-place” surface that makes movement easier for those in a wheelchair or pushing strollers. There is also a Snack Shack and Beaulieu said staff members will soon install shade awnings for the picnic table areas.

Adjacent to the playground, the splash pad features numerous small and large water toys for children of all ages, including a large plastic bucket that fills to the brim and then dumps out water. The bucket has become popular with young visitors of the splash pad, who often gather underneath and let the waterfall cool them off. 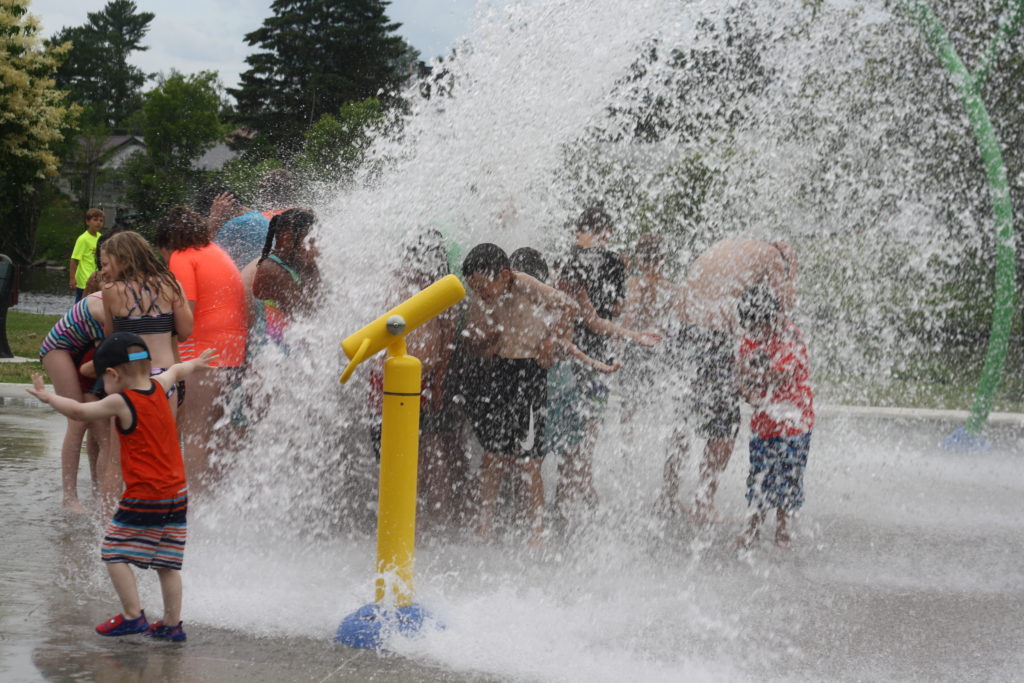 A large bucket that dumps out water has continued to be a popular attraction for local children at the new splash pad in Presque Isle. This year marks the first summer that both the new splash pad and playground are open at Riverside Bicentennial Park.
(Staff photo/Melissa Lizotte)

Riverside’s new play area has become a favorite among folks outside of Presque Isle, including Jamie Deschaine of Fort Kent, who visited with her 3-year-old son Jackson on Wednesday.

“This is our second time coming here and it definitely makes the trip worth it,” said Deschaine, as Jackson dried off after a fun afternoon in the water. “On a hot day this is a great way to cool off.”

Beaulieu noted that plans to develop an extension of the Recreation and Parks bicycle path, which will loop around the Riverside recreational area, are still in development, with the project to go out to bid with construction companies soon.

The path currently begins on North Street near the fire and police departments and goes past part of the playground and splash pad before running alongside Chapman Road and St. John Street.

Though the department has yet to confirm costs for the project, Beaulieu said the path will be funded through possible donations or grants and not the city of Presque Isle.

The playground became a community project that the Presque Isle Rotary and Kiwanis Clubs and United Way of Aroostook began in 2016, raising $330,000 from local donations toward the $470,000 price tag. Presque Isle contributed $141,000 of its own funds to that project.

Hours for the splash pad are 10 a.m. to 8 p.m. every day while the playground is open from dawn until dusk every day.

It was a freezing day across The County, but you could hardly tell from the turnout. Even after a massive surge in absentee ballot requests across the Central Aroostook area, droves of people came out to vote in Presque Isle, Mapleton, Washburn and Fort Fairfield.
Pets END_OF_DOCUMENT_TOKEN_TO_BE_REPLACED