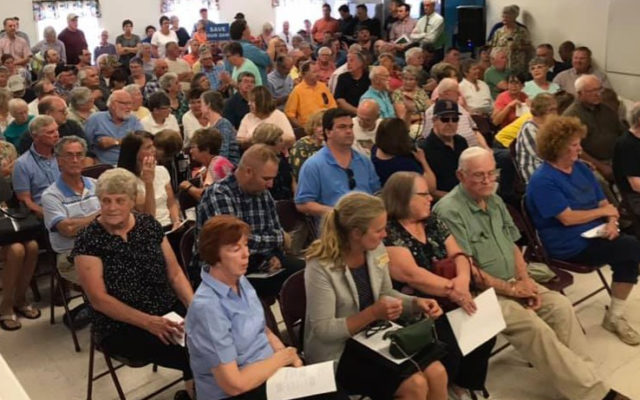 Jen Lynds • August 29, 2019
More than 100 residents from Maine and Canada packed into East Grand High School in Danforth on Wednesday evening to hear information and discuss a Baileyville pulp mill’s controversial proposal to abandon a dam it owns.

DANFORTH, Maine — More than 100 residents from Maine and Canada packed into East Grand High School in Danforth on Wednesday evening to hear information and discuss a Baileyville pulp mill’s controversial proposal to abandon a dam it owns.

In late 2016, Woodland Pulp asked the Federal Energy Regulatory Commission for permission to surrender its license to operate the Forest City hydroelectric dam on East Grand Lake. The company said the cost of maintaining and operating the dam outweighs the benefit of using the electricity it generates.

The Federal Energy Regulatory Commission held a technical meeting on Aug. 28 at the school to gather information from the community and answer questions from landowners about who should maintain the dam.

Cleo Deschamps, general attorney for FERC, represented the agency at the meeting.

Representatives from Woodland Pulp, the U.S. Fish and Wildlife Service and the Maine departments of Environmental Protection and Inland Fisheries and Wildlife participated in the panel discussion.

The more than four-hour session allowed the panelists to gather information from attendees and provide it to the officials who will ultimately decide the dam’s fate. No promises or decisions were made during the meeting.

More than 100 people attended a rally to save the dam at First Settlers Lodge in Weston earlier this month.

During the public comment session, attendees expressed outrage about any proposal to abandon the license. The majority of the residents told FERC, Woodland Pulp and state and federal officials that the area would be devastated economically and environmentally if the business were allowed to abandon the license.

David Snow said that his family has owned property on East Grand Lake since 1905. He said that both the economy of the area and the fish in the lake would be destroyed if the water levels dropped by six feet.

“The fish depend on the deep water,” he said. “The natural state of the water is now.”

Elbridge Cleaves, a lifelong Weston resident, noted that Grand Lake is “our economic base.”

“It is our future,” he said. “Anything that destroys its value impacts our future.”

Scott Hannington, who also attended the meeting, said that dropping the lake down six feet would result in “coves in the lake and surrounding lakes that are going to be clam flats.”

Susan Simon, who owns property on East Grand Lake, said that she drove up to the meeting from her home in New York City. She asked if any of the FERC officials at the meeting had actually gone and looked at the dam. None had done it.

“Thank you very much,” she said as the crowd applauded her statement.

Mike Saunders, another local landowner, advised the crowd to begin a letter-writing campaign.

“Start writing to FERC, to Woodland Pulp, to your politicians,” he said. “Tell them that you are not happy. Keep the pressure on.”

Maine is more than eight months into Medicaid expansion under the federal Affordable Care Act and trends around who is enrolling and where they live are starting to emerge, bucking some expectations and pointing out access challenges.
Pets END_OF_DOCUMENT_TOKEN_TO_BE_REPLACED