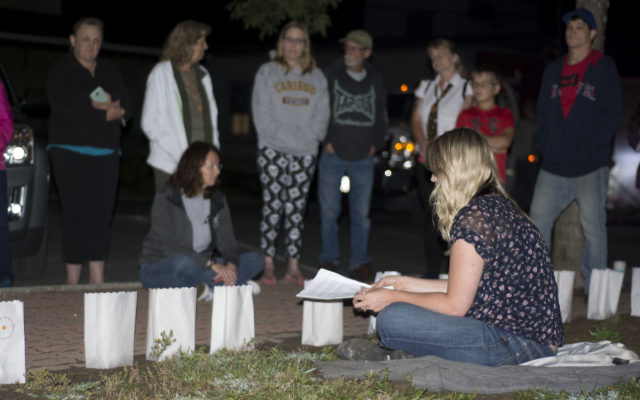 Community shares stories of hardship and hope during Overdose Vigil

Chris Bouchard • September 6, 2019
More than a dozen people gathered on Sweden Street the night of Aug. 29 to share their stories of substance use and recovery during Recovery Aroostook’s Overdose Awareness Vigil.

CARIBOU, Maine — More than a dozen people gathered on Sweden Street the night of Aug. 29 to share their stories of substance use and recovery during Recovery Aroostook’s Overdose Awareness Vigil.

Recovery Aroostook Chairwoman Sarah McLean welcomed everyone to the event, which took place outside the Caribou Movie Theater, and introduced Courtney Allen, who co-founded James’ Place in 2018, an Augusta-based organization offering recovery housing. The home began with only three beds and soon moved to 10.

Allen, who told those attending the vigil that she dropped out of school in seventh grade, is preparing to graduate with a Bachelor’s Degree from the University of Maine at Augusta. She plans to pass the director’s torch to another in order to prepare for graduate school, she said.

McLean introduced Allen by stating that she “spends her free time at the State House lobbying for change, and sharing a viewpoint that many elected officials do not see,” adding that Allen decided to visit Aroostook County after being inspired by current efforts to establish a recovery house in the area.

Allen recounted her own harrowing story of substance use, and began by sharing a moment in which she locked herself in a room at her home, “covered in fresh track marks, sitting on the floor for hours trying to find a vein,” as she could hear her children calling for her.

At 11 years old, she said her grandmother’s health was failing and her friends introduced her to alcohol, and that as she took her first shots on a beach, the world seemed slower and more peaceful.

“Not long after that,” she said, “I’m standing by my grandmother, who said that it’s now my responsibility to take care of my family. It was her dying request.”

At the time, Allen said her father was deployed to Iraq and her mother suffered from mental health issues. These factors led to her dropping out of middle school.

“I was an honor roll student who never went to class,” she said, “and eventually dropped out. I spent my days drinking and taking care of my mom while my dad was deployed.”

Her father eventually returned, but was “quickly sent back.” Eventually, Allen said her parents separated.

Allen had to grow up quickly, and though her experiences with substances worsened, she eventually made the decision to join a recovery program. It was through this program that she met James, who overheard her discussing car troubles after a meeting and offered to help.

From there, she said they quickly fell in love, and helped one another on their journey to recovery. Allen said for two years they dated and worked to build each other up, but she later discovered that he was using again.

Attempts to get him submitted to a treatment facility were unsuccessful due to a lack of insurance, she said, and no beds were available in any nearby sober houses. She said that after three days of not hearing from him, she realized something had happened.

Allen said she didn’t recall taking a single breath between leaving her desk and finding James in a bedroom, discovering that he had passed away.

From there, Allen said she was inspired to act, and soon founded James’ Place, a low-barrier, low-cost, stable housing program serving any individuals with substance use disorder seeking assistance.

Allen joined the Recovery Aroostook group on a hiking trip the following day, and said she brought James’ ashes with her.

“He’s here with us tonight,” Allen said. “I travel a lot through my work, so I brought his ashes. Every time I go somewhere, I release a little bit.”

She thanked everyone in attendance for listening to her story, and commended the community on its efforts to open a recovery house.

John Holabird, who attended with his 9-year-old son, spoke of his journey to recovery, and on the therapeutic nature of group gatherings like the vigil.

Holabird praised Allen for having the courage to tell such a personal story, adding that these community dialogues will only help more become aware of the substance use epidemic.

“There’s nothing wrong with talking to people about your problems and shedding a tear in front of them,” he said. “It’s cleansing. That’s what’s going to get the message out there and help others feel more comfortable in discussing their problems.”

Holabird said he was drinking and smoking by the time he was in fifth grade, which led him down a path to heavier substance use. He ended that journey with his decision to pursue recovery.

Holabird began the recovery process two years ago, and in addition to a love for his son and family, he said he is also motivated by his faith to lead people to God.

“Just two years ago, I had no spirit,” he said, “and I definitely wasn’t leading people to the Lord.”

Bill Flagg, communications director at Cary Medical Center and Recovery Aroostook spokesman, commended everyone for opening up and for their courage and resiliency to staying sober.

Flagg also shared a story about his daughter, who at one point was in “such a bad place,” even after going to one of the “best places in the country” for rehabilitation.

“After coming back home,” Flagg said, “it didn’t take a month until she was right back to where she was. She came to our house at 3 o’clock in the morning, and said ‘Dad, you’ve got to help me.’”

“And thank God the resources are here,” Flagg continued. “We knew how to find them, and we got tremendous help.”

Flagg said it is his hope that no person has to find themselves in a situation where they are unable to receive the help they need, adding that this is why the upcoming plans to establish a recovery house in Caribou are so important.

McLean, before the event adjourned, thanked everyone for attending and urged them to attend the next city council meeting on Sept. 9 to show their support for the recovery house.

It was a freezing day across The County, but you could hardly tell from the turnout. Even after a massive surge in absentee ballot requests across the Central Aroostook area, droves of people came out to vote in Presque Isle, Mapleton, Washburn and Fort Fairfield.
Pets END_OF_DOCUMENT_TOKEN_TO_BE_REPLACED