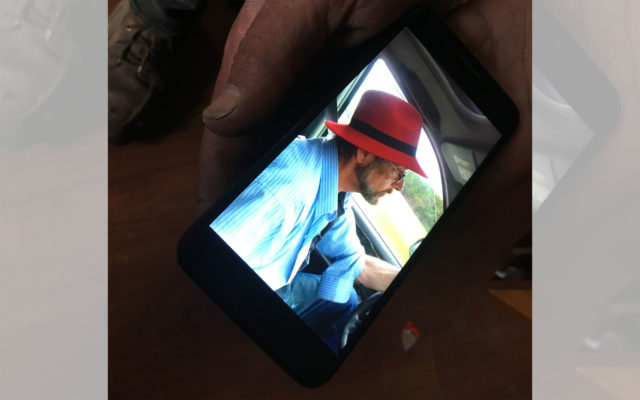 Found inside the truck were 51-year-old Roger and 25-year-old Allen Curtis. Friends and neighbors said that the two were celebrating Curtis’ birthday earlier in the night. Kennedy said he last spoke to both of them around 10 p.m., when they stopped by his house for a visit.

Kennedy didn’t know exactly what happened after they left. He tried calling both of their phones, but neither picked up.

Authorities have released few details about the killings, leaving friends and neighbors to fill in the gaps of what they think happened to their loved ones during the early morning hours of Aug. 13 in Castle Hill.

John Kennedy holding the hat worn by his friend Roger Ellis. Kennedy bought the hat for Ellis in 2017. (Nina Mahaleris)

Autopsies of the bodies confirmed that both men had been shot but authorities haven’t released any new developments lately in the case. Stephen McCausland of the Maine Department of Public Safety would not say on Thursday, Sept. 19, if any arrests have been made.

Despite being 26 years apart in age, Ellis and Curtis were well-known on State Road, where they grew up. They formed close relationships with neighbors who became like family. 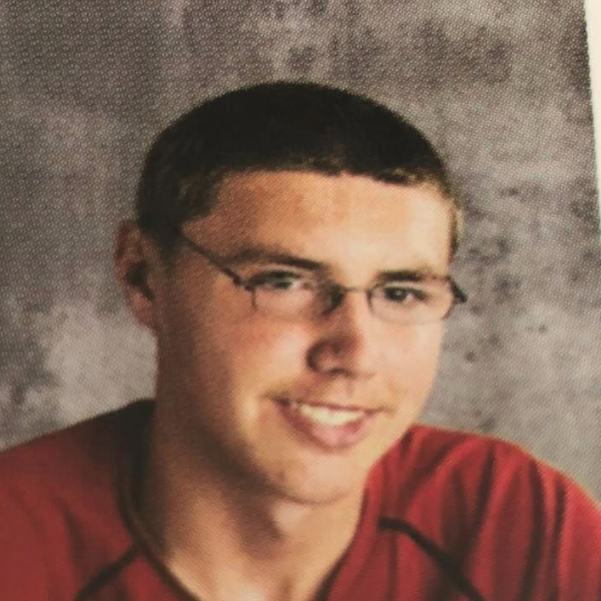 One neighbor said Ellis and other local kids would frequently stop by her house after school for homework help and ice cream.

Kennedy said he met Ellis shortly after moving to Castle Hill in 2004. The two became great friends, exchanging gifts and spending time with each other’s families.

Ellis was a collector of sorts, Kennedy said. He had his own personal collection of Slim Jim mugs and antique Coca-Cola bottles that he was unlikely to part with.

“He wasn’t much for change,” Kennedy said, remembering how rarely he was able to get Ellis to venture outside of Aroostook County.

On his phone, Kennedy scrolled through a collection of photos with both men from years passed — pictures of Ellis stacking wood on his land, some of Curtis playing with Kennedy’s grandson during the annual Balloon Festival in late summer.

Pulling up an August 2017 photo taken of Ellis driving his truck, Kennedy described the history behind his signature red felt hat.

The hat was a staple for Ellis but since it had been ruined after years of hard work, Kennedy promised he would find another just like it for his friend. After six years of searching, he and his wife, Krista, finally stumbled upon a single red felt hat on the last day of the Presque Isle fair.

Ellis made it his own by sticking a brown pheasant feather out from under the hatband.

Surrounded by loved ones when it came time to lay his late friend to rest, Kennedy said he toasted to his memory by cracking open the last beer in Ellis’ refrigerator — a cold can of Natty Daddy.

In their first year after moving to Castle Hill, Krista made him a tin man ornament assembled entirely out of empty Natural Ice beer cans, as she’d quickly learned that was his preferred beer.

A month after Ellis’ death, the tin man was still hanging in the tree next to his house.

Like Ellis, Curtis established solid friendships with his neighbors on the State Road. Kennedy said that his son Adam attended Mapleton Elementary with Curtis as children.

Chelsea Guerrette said she had been close with Curtis at Presque Isle high school and recalled getting into mischief with him and their friends. In school, the group would conspire among themselves to stick pencils in the ceiling by launching them in the air, she said.

In his teens, Ellis found work at the local service station, now known as the Mapleton One Stop convenience store. When Ron Madore and his wife took over the business in 1988, Ellis, who’d been working for the previous owner, stayed on board.

Madore said they grew to have a lot of faith in him during the nine years Ellis worked at their store. He frequently opened in the mornings, making sure that everything was ready for the day.

The Madores knew Ellis as a dependable worker who was “easy to get along with.”

From around 2013, Curtis had found a job at Porter Farms in Mapleton, where his father regularly worked for at least a decade, owner Matt Porter said. Curtis occasionally showed up in time for the harvest but since about last summer, he began working at the farm full time.

He had worked just days before police found his body that Tuesday morning. On the Friday before, Curtis showed up at the farm, did his tasks as usual and “left with a big smile on his face and that was that,” Porter said.

He described Curtis as quiet and hard working. “Couldn’t ask for a better person,” he said of his former employee. Porter said he had taken Monday off from work to celebrate his birthday.

Neighbors, friends and relatives close to the victims remember them both as hardworking and well-intentioned.

“[He] had some faults, but we all do,” Tom Argraves said of his late childhood friend and neighbor, Ellis. “You couldn’t ask for a better fella,” said Argraves.

Sabine Jones described Ellis as a non-violent, amicable person who didn’t want to give anybody trouble. “He was pretty much a peacemaker,” she said.

Ellis was married for several years, Jones and Argraves said. But the couple didn’t have children and later divorced. Curtis reportedly didn’t have children, either, but is survived by his parents along with his brother and sister, his obituary stated.

With the exception of Ellis’ father who died in 2017, Ellis is survived by his mother Goldie and three sisters.

Keith Jordan, another local, said he lived near both men and had been friends with Ellis for the last 20 years and Curtis for about the last eight or nine. “They were both friends of mine — just great people who would do anything for anybody,” he said.

“I could never imagine anybody doing anything to hurt them let alone kill them. Just this past weekend, Allen brought over potatoes and hamburg for me and my children,” Jordan said the day after police announced they were investigating the case as a double homicide.

The two men died shortly after celebrating their birthdays.

When Ellis turned 51 on Aug. 6, he and Kennedy, who were repairing Ellis’ mother’s barn, went out to see what work had to be done. His mother, Goldie and sister Debbie, insisted on taking the two men out for dinner for his birthday, Kennedy said.

Six days later, Curtis was celebrating his 25th birthday with friends on the State Road, some neighbors confirmed, just hours before he and Ellis were found dead.

“His birthday was Monday, [and] he was killed Tuesday morning,” one neighbor said.

It was a freezing day across The County, but you could hardly tell from the turnout. Even after a massive surge in absentee ballot requests across the Central Aroostook area, droves of people came out to vote in Presque Isle, Mapleton, Washburn and Fort Fairfield.
Pets END_OF_DOCUMENT_TOKEN_TO_BE_REPLACED