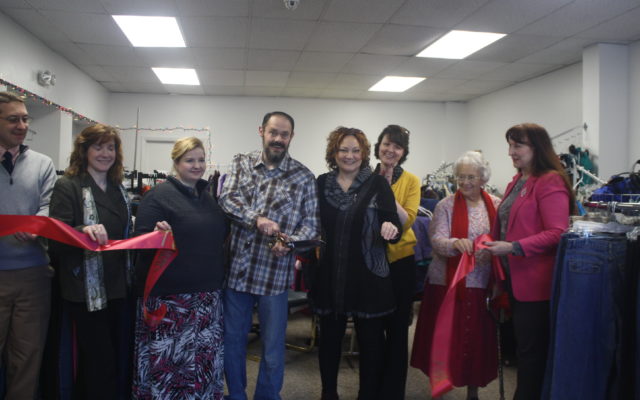 David Marino Jr. • December 3, 2019
The Caribou-based Maine Hope Center opened a new thrift shop in Presque Isle on Monday, Dec. 2, laying the groundwork for a charity outlet on one of The County’s busiest streets.

PRESQUE ISLE, Maine — The Caribou-based Maine Hope Center opened a new thrift shop in Presque Isle on Monday, Dec. 2, laying the groundwork for a charity outlet on one of The County’s busiest streets.

The organization’s namesake shop at 445 Main Street, Maine Hope Center, will sell used clothing and tote bags, among several other items. The facility also offers other services, including a food bank and a selection of freely available books.

The ceremony, held inside, began with the recording of a prayer stating the importance of helping the needy from Caribou-based Pentecostal pastor Roger Jewell. Flanked by multiple well-wishers, including his wife and co-founder Helena Garrett and Presque Isle City Manager Martin Puckett, co-founder Kenneth Garrett cut the ceremonial ribbon declaring the store’s opening.

Helena and Kenneth Garrett started the non-profit Maine Hope Center this year to expand access to hyperbaric oxygen therapy. The treatment involves patients entering a chamber in which they breathe in oxygen at higher than average air pressures, filling the blood with oxygen that can help the body repair itself.

According to John Hopkins Hospital, the treatment has been used to treat carbon monoxide poisoning, flesh-eating diseases and diabetic wounds, among other ailments.

Maine Hope Center co-founder Helena Garrett said that given the relative isolation of Aroostook County, many individuals who desire treatment have had difficulty locating a hyperbaric oxygen therapy chamber. She said anyone who receives a doctor’s prescription can receive free sessions in the chamber at its facility in Caribou.

Garrett said that the group’s Christian faith was an integral part of the work they do. She hopes the Maine Hope Center can help spread her beliefs, as well as raise awareness of the free treatment her center provides.

“God doesn’t do everything for people. He wants us to do things for ourselves too,” Garrett said. “When you work toward positive steps, you align yourself with what God wants.”

Presque Isle Director of Economic and Community Development Galen Weibley, who said he began his new position this week, said he was excited for what the store could provide residents as temperatures drop.

“It’s going to provide a much-needed space for the residents of the city,” Wilder said. “There seems to be a lot of clothes and other things to help folks get bundled up and ready for the winter.”

After the ribbon cutting ceremony, Kenneth Garrett, playing an acoustic guitar, sang the gospel song “I Can’t Even Walk (Without You Holding My Hand),” while Helena Garrett performed harmony vocals.

The Central Aroostook Chamber of Commerce spearheaded the ribbon-cutting ceremony, attended by about eight people total.

Maine is more than eight months into Medicaid expansion under the federal Affordable Care Act and trends around who is enrolling and where they live are starting to emerge, bucking some expectations and pointing out access challenges.
Pets END_OF_DOCUMENT_TOKEN_TO_BE_REPLACED