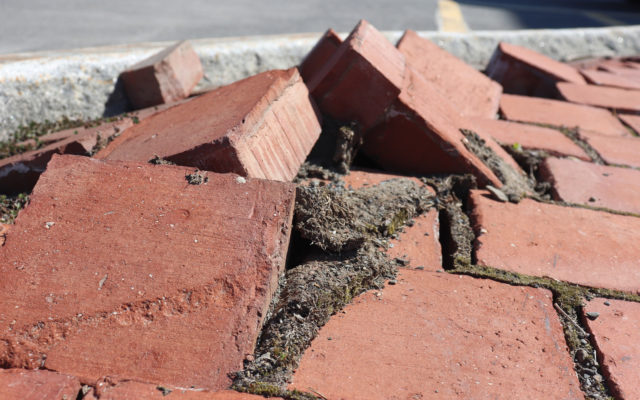 Alexander MacDougall • May 19, 2020
Houlton residents who traverse the downtown’s battered sidewalks shouldn’t expect to see any improvements for at least another year.

HOULTON, Maine —  Houlton residents who traverse the downtown’s battered sidewalks shouldn’t expect to see any improvements for at least another year.

A proposed renovation of downtown Houlton’s brick sidewalks has seen some progress, but is not expected to be bid out until at least the summer of 2021, according to a memo drafted by Nancy Ketch, Houlton’s economic and community development director.

The project has been in the works since 2016, when the town received a $400,000 grant from the Maine Department of Transportation to restore the brick-layered sidewalks around the Market Square area, which are in poor condition and have led to many resident complaints, particularly during wintertime when they are susceptible to slippage.

Ketch said back in 2017 that construction would not begin until summer 2019 with a possibility of being extended until summer of 2020. Now, the project is expected to be pushed back another year for 2021.

The memo was presented at the Houlton Town Council meeting held on Monday, May 11, when Ketch presented the information in a video conference to field questions from councilors regarding the project.

“The people who have businesses around the downtown have been asking me [about it],” councilor Jim Bell said about the project. “The general sense, which could be completely incorrect, is that they’ve heard for three years that this is going to be done, possibly next spring, possibly next spring. And we can’t even say definitively now next spring.”

Bell questioned Ketch as to whether a more definite timetable could be made beyond what was stated in the memo. In response, Ketch said that construction on the project was dependent upon the Maine DOT’s schedule. She also stated that due to COVID-19, many DOT projects were somewhat up in the air, hence why they were still in a “gray area” about the project.

“Unfortunately, when you work with government money, you’re somewhat at the mercy of their schedules,” Ketch said. “I can’t really give anything more definitively than I did, or I would have put it in the update.”

The memo contains updates on the project tracing back to May of 2019, when the council approved the James W. Sewall Company of Old Town as the engineers for the project. It also states that on April 14, 2020, the company conducted a site visit to document conditions and discuss which materials were needed. After that, the company still needed survey documents from Maine DOT, but had received them shortly after the visit.

A few years back the Ark was gifted with something that we never dreamed possible. It is a gift that left us speechless and opened a whole new door for us.
Campaign Corner END_OF_DOCUMENT_TOKEN_TO_BE_REPLACED