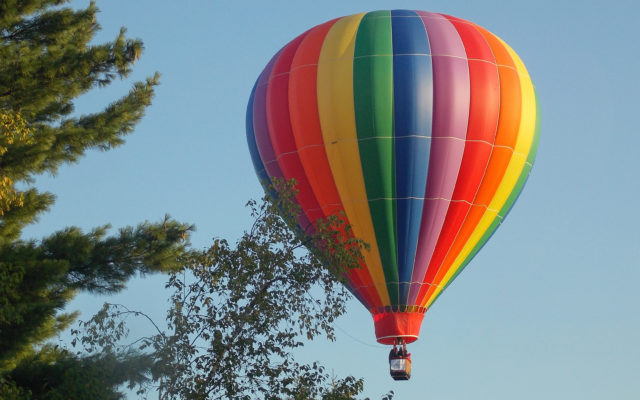 David Marino Jr. • May 21, 2020
The cancellation of the Crown of Maine Balloon Fest has disappointed many in Aroostook County who enjoy the colorful balloons hovering over the landscape.

PRESQUE ISLE, Maine — The cancellation of the Crown of Maine Balloon Fest has disappointed many in Aroostook County who enjoy the colorful balloons hovering over the landscape.

The annual international event, which draws balloonists and spectators from the U.S. and Canada, is another regional staple scrapped because of the COVID-19 pandemic. But festival organizers had no other choice given Maine’s policies to fight the spread of the virus, festival chairman Floyd Rockholt said Tuesday.

Rockholt and the festival committee had not made the decision lightly when they unanimously agreed to cancel the festival about a week ago, he said. Even as other balloon festivals across the country dropped their events in quick succession, the committee continued to hold out hope for a reduced celebration.

Yet, because it’s impossible to know what the status will be of The County and Maine in August, the committee needed to make decisions based on what it knew at the moment. And there were several barriers.

For a festival that usually brings in 10,000 people, a prohibition on gatherings of more than 50 people for the foreseeable future would have made putting the festival on extremely difficult. Flight participants alone would likely have broken the rule.

Also at issue was the national — as well as international — nature of the event. Most of the balloons come from the American South and Canada, according to Rockholt. The U.S.-Canadian border remains closed, and all people entering Maine from out of state are subject to a mandatory 14-day quarantine.

Apart from state rules, Rockholt said there was a moral element to the cancellation. Organizers would be asking local businesses to sponsor them during an economic downturn. And by putting the festival on — and potentially bringing in out-of-state travel — they would risk spreading COVID-19.

“An important part of this event is help from the community,” Rockholt said. “We don’t want to spread anything.”

The committee still plans on hosting a couple of events during the Aug. 27-30 weekend to continue the County tradition in some form. He said it was discussing putting on a socially distant concert as well as hosting a drive-in movie.

Rockholt said the festival will be back “bigger than ever” in 2021. Besides at least 15 balloons, he hopes to expand programming for children throughout the Aug. 26-29, 2021 weekend.

Derik Smith — a longtime pilot and sponsor, as well as the event’s current pilot coordinator — said that he would have loved to see the fest happen this year, but a path forward did not make sense given the circumstances.

“I have friends I’ve known for 15 or 16 years that I’m not going to get to see this year at all, and that breaks my heart,” Smith said. “But, I’d rather they be safe and all my local loved ones be safe.”

The Crown of Maine Balloon Fest was first staged in 2004. It celebrates the transatlantic crossing of the Double Eagle II, which traveled from Presque Isle to Miserey, France, in August 1978.

A few years back the Ark was gifted with something that we never dreamed possible. It is a gift that left us speechless and opened a whole new door for us.
Campaign Corner END_OF_DOCUMENT_TOKEN_TO_BE_REPLACED