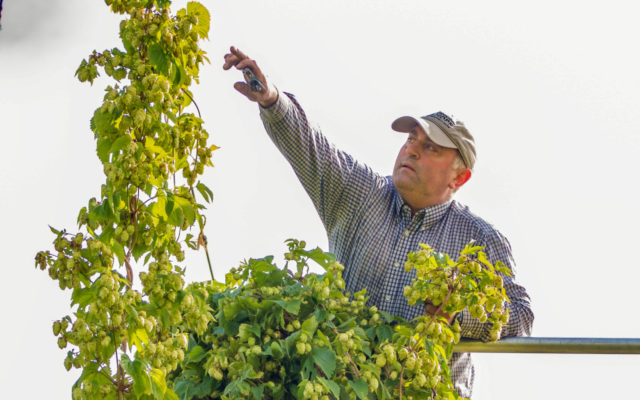 Aroostook Hops will use $50,000 grant to update harvesting and aid fellow farmers

David Marino Jr. • June 23, 2020
The company was one of 11 agricultural producers and organizations across Maine to receive a 2020 grant.

WESTFIELD, Maine — Shortly after Jason Johnston moved to Westfield in 2007, his interest in homebrewing drove him to start planting hops — a plant used to flavor and preserve beer. Now, 13 years later, Aroostook Hops is leading the way in its industry and receiving accolades from the state.

On Wednesday, June 17, the Maine Department of Agriculture announced that it had awarded Aroostook Hops an Agricultural Development Grant. 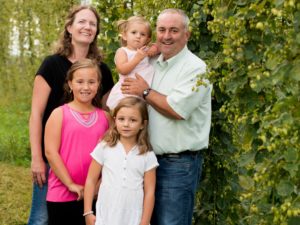 The $50,000 grant will go toward new equipment to update Aroostook Hops’ harvesting and drying system. The farm also plans to use the grant to assist other farmers in The County who are interested in growing hops, helping with the high barriers of entry to the industry by allowing their equipment to be used for harvesting, pelletizing and packaging.

“We have been at it for over a decade, and we’ve been proving we can develop quality hops to sell to many Maine breweries,” Johnston said.

Aroostook Hops, which started in 2009, is a four-acre hops farm that sells its plants to about a dozen Maine breweries, including Lubec Brewing Company, Northern Maine Brewing, Geaghan Brothers Brewing Co. and Allagash Brewing Company.

Hops were once used primarily to preserve beer, including preventing spoiling as the liquid traveled long distances. But the substance has taken on a leading role with the rise of craft beers and microbrewing, most famously in India pale ale.

Johnston said the venture is a family business at its core, with even his young daughters, Kathleen, Marie and Elise, getting in on the action. He co-owns the business with his wife, Krista Delahunty.

Growing the perennial hop plant is an intense and lengthy process, with plants taking about three years to fully develop. At the end of the process, they are about 18 feet tall.

Just recently, Kathleen, 11, and Marie, 8, helped with one of the most vital parts of the hops process: stringing. Stringing allows hops to grow tall and avoid fungal diseases. 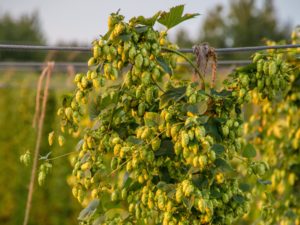 Aroostook Hops’ website explains the plants grow each year by climbing up coir strings attached to an 18-foot tall trellis system. The plants are cut down for harvesting.

While he said it seems as such during intense periods from May to June and August to September, Aroostook Hops is not a full-time job for Johnston. Johnston, who grew up in Mapleton, is the dean of the College of Arts and Sciences at the University of Maine at Presque Isle. He is also an associate professor of ecology.

Johnston said he appreciated the support from the Maine Department of Agriculture. He said the Agricultural Development Grant — which began in 1996 — had become an essential resource for farmers across the state as they built their businesses and developed new practices.

“People have taken note of Aroostook Hops,” he said.

Correction: A previous photo caption stated that Jason Johnston was cutting down bines from a 14-foot trellis. It is an 18-foot trellis.

Gubernatorial candidate John Glowa said that he wants to spur government reform that truly creates a system of, by and for the people when he visited Presque Isle City Hall.
Pets END_OF_DOCUMENT_TOKEN_TO_BE_REPLACED

Many of you have been asking about our super popular “Toast to the Animals” celebration. After several COVID-19 cancellations and not being able to host this great fundraiser, we are finally ready to celebrate the animals once again and help support the Central Aroostook Humane Society.
What's Happening This Week END_OF_DOCUMENT_TOKEN_TO_BE_REPLACED