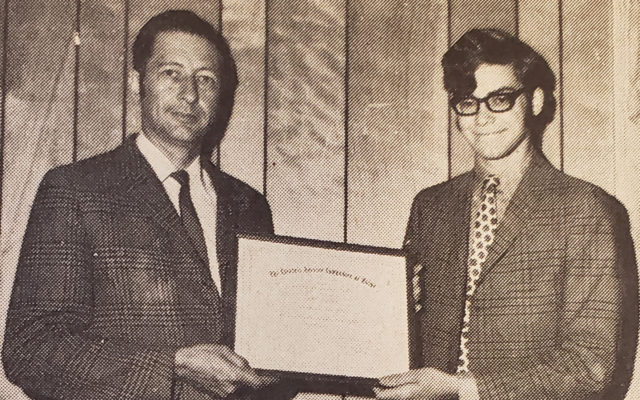 New officers of Rotary Club reported on the conference at Fredericton — Harold Bryant, new president of the Presque Isle Rotary Club, gave an account of the District Conference at Fredericton at the meeting at the Northeastland. Bryant and the other new officers of the Club began their tenure of office at that meeting. Other members that gave a report of the Fredericton conference were F.P. Stevens, Rev. T.J. Cornish, E.W. Loane and A.L. Reynolds. Sgt. George McGuire was an honored guest at the meeting.

Thumbs up — Superintendent of the Maine School of Science and Mathematics, James C. Morse Sr., gave a victorious “thumbs up” to news that the 117th Legistlature passed, and Gov. King signed legislation providing $2.5 million in state funds for the school, which planned to open with 150 students in the fall. Andy Weatherhead, Brent Tweed, Briand Tweed, and Ian Hall were four Limestone students accepted to the initial MSSM class. Of the 102 applicants who had been accepted to MSSM as of June 30, Aroostook County is represented with students from Ashland, Caribou, Houlton, Presque Isle, Patten and Washburn.

Taking it to the bank — A group of about 12 Presque Isle parents raised funds for new playground equipment at Mantle Lake Park and hoped for a boost from a fundraiser, First Citizens Bank in Presque Isle. The bank promised to donate 50 cents for every transaction that occurred through their new ATM machine between June 30 and the end of July. The playground fundraisers hoped to gather $50,000 for the new equipment.