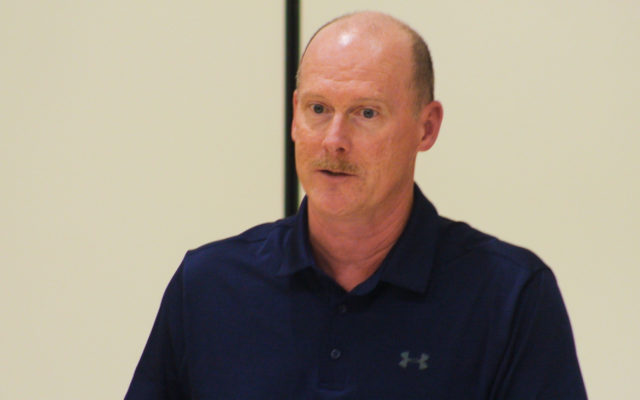 David Marino Jr. • August 3, 2020
Summers are not usually such a busy time for administrators in the Presque Isle area’s six school districts. Yet, educators have spent the last few months crafting a plan for something they have never done: in-person teaching during a global pandemic.

PRESQUE ISLE, Maine — Summers are not usually such a busy time for administrators in the Presque Isle area’s six school districts. Yet, educators have spent the last few months crafting a plan for something they have never done: in-person teaching during a global pandemic.

How schools resume instruction in the new school year will have a substantial impact on both the education of thousands of students and the future trajectory of COVID-19. While the central Aroostook region has been relatively untouched by the virus, the close-contact learning and socializing typical in schools could easily cause COVID-19 to spread if precautions aren’t taken.

Yet, remote learning has been a challenge for students and teachers since it was introduced in March during Gov. Janet Mills’ civil state of emergency. The Presque Isle area is primarily rural, with some living in homes where a stable internet connection is nearly impossible. And regardless of internet speed, many local educators consider remote education to be far inferior to in-person instruction.

While school districts across the state have broad discretion in how its students will return to school, the Maine Department of Education has provided several guidelines districts have to follow.

Students and teachers must wear face coverings, there must be three feet of distance for students wearing masks and six feet without masks, and all students or staff members with symptoms of COVID-19 must not go to school.

Along with all the other counties in Maine, education officials gave Aroostook County the green light to reopen on Friday, July 31. That designation — which is redone every two weeks — could influence the system districts decide to adopt, though only Easton has pegged its plan to the DOE’s.

Adapting to the new normal can be especially challenging for larger districts like SAD 1, which has nearly 2,000 students from Presque Isle, Mapleton, Chapman, Castle Hill and Westfield. Students once ate in booming cafeterias packed with young people. Now, to reduce the risk of spread and follow state mandates on gatherings, students will dine in classrooms.

SAD 1 will follow a green model, with students coming back to school while following state rules on social distancing and facemasks. Its choice followed previous statements from Superintendent Ben Greenlaw, who had long said he would do everything possible to allow his students to return to school safely.

Aware that the situation on the ground could change, teachers in the district have expanded their remote learning skills in professional development since the end of the last school year.

Greenlaw said that remote learning was no replacement for in-person instruction. With few cases in the Central Aroostook region — there have been four documented since the pandemic began — he does not believe holding in-person courses would be especially risky if state mandates are followed.

If the district could make all of its own rules, reopening may have looked different. The plan approved by the school board on July 15 had not required students to wear masks in the classroom. Gov. Janet Mills announced a facemask requirement for classrooms across Maine two days later, causing a policy change.

The school will also be following state guidelines for safety on school buses, including requiring all students to wear facemasks. In a plan released on Friday, SAD 1 encouraged parents to bring their own children to school if possible to reduce the number of students on buses.

In guidelines released on July 29, the Easton School Department said it expects to return to school with a yellow designation, which many school districts specify as a hybrid model with partial remote learning.

In contrast to other districts, Easton’s yellow model will still have the majority of students in classrooms — the primary difference is that six feet distance will be maintained at all times, even with masks, and fewer transitions allowed between classes.

Under yellow, parents will be allowed to choose to send their child to school or opt for remote learning. Although it’s not explicitly in the plan’s language, Superintendent Mark Stanley said the district would make similar accommodations under a green plan.

Easton’s reopening plan is unique in that it sets rules for reopening based on DOE recommendations. Though the state’s guidance is advisory, Easton pledged to base its decisions on state designations — it will only go green only if the DOE designates Aroostook County with that color, for example.

SAD 20 (Fort Fairfield) will follow a hybrid model (yellow light) plan that will split in-person learning between two groups of students divided alphabetically and based on bus routes. Each group will have two days of remote learning — either Monday and Tuesday or Thursday and Friday. Wednesday will be all remote for all students while staff deep clean schools.

Superintendent Tim Doak said that COVID-19 had flipped the usual formula of school policy on its head. Usually, school districts seek to find every way to spend taxpayer dollars sparingly — putting as many kids on buses as possible and only purchasing supplies that are absolutely necessary.

With safety from the virus now being an urgent priority, the district has had to restructure, finding new ways to social distance in the classroom and on the bus.

Along with parents who don’t want to risk their children being infected with the virus, Doak said there would likely be parents who won’t want to send their children to school because of the mask mandate. The district plans to appoint certain teachers who will only teach remotely for those and other situations arising under the plan.

“Parents do need a choice when it comes to something like this,” Doak said. “And if they have a choice to stay remote, schools have to provide education for them, too.”

While the district will begin classes in yellow, Doak said rolling stoppages in which students all learn remotely is a very likely possibility if there is a rise in COVID-19 cases.

SAD 42 (Mars Hill, Blaine) will feature a similar hybrid model. Students will come to school in shifts, half in the morning and half in the afternoon, with both groups of students kept from contacting each other. Students will spend the other half of the day working on assignments at home.

Additionally, students would be given a temperature check when they arrive at school to ensure they are not ill, along with asking parents and guardians to complete a self-assessment of their children before they go to school.

Superintendent Elaine Boulier said students would return fully to in-person courses after harvest break if there is no corresponding rise in cases in the area.

SAD 45 (Washburn, Wade, Perham) will be starting with a green plan, following all state mandates as it brings the 300 students in the district back to school.

Superintendent Larry Worcester had long tried to gauge public opinion in the small community, speaking to students and parents about it even when he ran into them at the post office or grocery store. He said the verdict was nearly unanimous: teachers, parents and students all wanted to go back to in-person instruction.

In an emergency school board meeting on Tuesday, July 28, to announce the district’s reopening plan, Worcester said that even a detailed plan wouldn’t prepare faculty for every situation. Only with practice will the district adapt to new regulations and circumstances.

He said the small class sizes in his schools will make some of these regulations — such as a social distancing requirement — easier to implement than in larger school districts in The County.

“It’s different for me with 300 kids in the district than maybe Presque Isle and Caribou,” Worcester said. “I’ve got two buildings — someone else might have eight.”

Superintendent Gehrig Johnson said his district plans to come back to school while arduously following all state guidelines. It plans on following a green light plan, with contingencies in place for others if, for example, a student or staff member is found to have COVID-19.

Johnson said it was important to get back to in-person learning because some were at risk of being left behind by the new system. Even the students who had excelled in a remote setting were missing out on socializing with their peers.

“There are large numbers of students that are losing the structure they have when classes are in session,” Johnson said.

Parents had already told Johnson that they were uncomfortable with the facemask requirement. While he understood their concerns, he said the school couldn’t resist the requirement if it wanted to — it’s a requirement from the DOE.

“The way we are looking at it, this is something that we are being required to do,” Johnson said. “And we are going to do the best we can with it.”

On Thursday, Rep. Harold “Trey” Stewart III, R-Presque Isle, announced he will run for a state Senate seat in the 2020 legislative election -- an important change for one of the most powerful representatives in the Maine House.
Pets END_OF_DOCUMENT_TOKEN_TO_BE_REPLACED