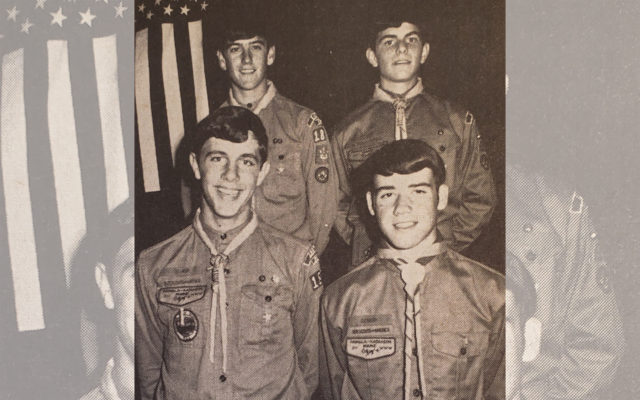 Presque Isle area From our Files – Week of September 2, 2020

Compiled by Yvonne Tardie, Special to The County • September 2, 2020
Sergeant Ransford M. Smith, 36, of Mapleton, attended the French language and civilization courses at the Sorbonne University of Paris.

Ellwyn Fulton promoted to junior manager — Ellwyn Fulton was promoted from interviewer to junior manager in charge of the United States Employment office, according to an announcement made by Paul E. Jones of Augusta, War Manpower Commission director. Fulton, who was in charge of the Fort Kent office during its existence, replaced John G. Small , transferred to the managership of the Bath employment office. Jack W. Townsend, manager of the Bath office, had been promoted to job analyst in the WMC administrative office in Augusta, filling a vacancy created by the transfer of Donald J. DeLisle to the Cleveland (Ohio) office.

FFA award — Jerry Donovan received a $25 check for placing third in the State of Maine Future Farmers of America Public Speaking Contest held in Orono. Alan MacIntosh, president of the Presque Isle FFA, presented the award. The award was made possible by the Maine Association of the FFA. Jerry, son of Mr. and Mrs. Floyd Harding of Presque Isle, was home on leave from the U.S. Army, and returned shortly afterwards to Texas where he was studying radiology.

Carpenter teaching at UMPI — Houlton lawyer, Michael Carpenter, was named director of the criminal justice program, as well as an assistant professor, at the University of Maine at Presque Isle. UMPI has a two-year associate degree program in criminal justice, as well as a B.S. degree with criminal justice concentration. On September 5th, Carpenter took up his new career focus although he intended to continue his law practice with assistance of Peggy Parker, an attorney from Portage. Carpenter helped craft laws in the five years he served in the state Legislature. He served as an attorney general 1990-94, returning to private practice in 1994.

City got a housing grant — The Presque Isle Housing Authority won a grant award of $130,000 for modernization and improvements to substandard housing facilities. The grant to be used by the local housing authority to improve the physical condition, as well as to upgrade the operation and management of public housing. The grants were awarded by the U.S. Department of Agriculture (USDA) and Housing and Urban Development (HUD).

National recognition — Gregg and Sam Collins of the S.W. Collins Company, Inc., were notified that their company was one of just 31 lumberyards and building material dealers across the country to be recognized for over 100 years of service to their community. The BMR Century Club Award is sponsored by the publication of the National Lumber Building Material Dealers Association.