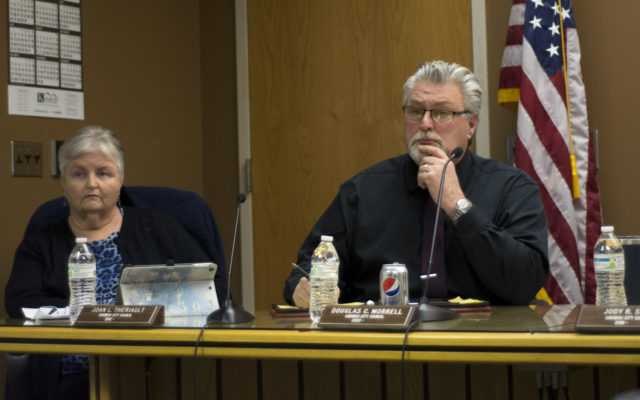 Chris Bouchard • September 21, 2020
A residents’ committee formed earlier this month to recall Caribou City Councilor Doug Morrell has gathered roughly a quarter of the 1,112 petition signatures required by Dec. 9 to move forward in the matter.

CARIBOU, Maine — A residents’ committee formed earlier this month to recall Caribou City Councilor Doug Morrell has gathered roughly a quarter of the 1,112 petition signatures required by Dec. 9 to move forward in the matter.

The committee submitted an affidavit of intent to the city clerk on Sept. 4. Petition forms were sent out on Sept. 10.

The petition asserts that Morrell used city personnel and property for his personal gain and that he publicly made verbal threats to RSU 39 Superintendent Tim Doak and to City Manager Dennis Marker.

“Overall, Mr. Morrell exhibits a lack of integrity, lack of respect for his fellow electors, acts unprofessional, and is a poor example of a Council Member to represent the citizens of Caribou,” the petition said.

Morrell said he believed the recall petition was an effort to remove a fiscal conservative from the City Council, and took issue particularly with the assertion that he used city personnel and property for his personal gain.

In June, Morrell asked the city manager to have the city’s Public Works Department clean up a dirt pile that he said was the result of them coming through last winter and rolling up sod outside his property.

“I took my tractor, which costs me money, after paying for the services I’m supposed to be paying for through my taxes, and I put it all up in a nice neat pile and put two orange cones there and I expect the city to come clean it up,” said Morrell.

Marker told Morrell that the department’s spring clean-up only applied to brush, trimming and primarily vegetation, adding that they likely did not clean up any dirt piles in front of his or any resident’s property as it is not part of the brush clean-up project.

“I’m just asking you to deal with it before I go out and deal with it,” said Morrell during the June meeting. “I took care of the problem they left. I cleaned it up nice and neatly.”

Morrell said he was within his rights as a tax-paying resident to request the clean-up, and denies the assertion that the statement was a threat.

“I can’t as a councilor direct them to do anything,” Morrell said, explaining his statement in June. “But if you don’t want to do it then I will go up there and talk to them as a taxpayer. There was no threats there. This is spaghetti thrown at the wall.”

He said this assertion implies that he stole from the Caribou taxpayers.

“I’ll admit I am rough around the edges, but one thing Caribou taxpayers ought to know is that I didn’t steal anything. I am not a thief,” he said.

Recall Committee Spokesperson Christine Lister said that, among the group’s reasons for the petition, Morrell failed to meet the councilor eligibility requirements of Article II, Section 2.01(b) of the city charter by not having his taxes paid by Dec. 31 of the previous year.

“Mr. Morrell’s wife posted a letter to her Facebook between the City Attorney and City Manager that revealed some creative presumption on how to tweak the meaning of that section so that he would not be held to the requirement and be seated regardless,” Lister said.

According to this correspondence, which Morrell shared with the Aroostook Republican following a Sept. 15 City Council meeting, the attorney cited a charter interpretation that was adopted by the Maine Municipal Association in 2013 and later reaffirmed in 2019 that a person is not eligible unless current on taxes, not that the taxes are completely paid.

The correspondence also said that failing to swear in a duly elected councilor could have constitutional ramifications for the city.

Members of the committee also assert that Morrell threatened the RSU 39 superintendent in March, demanding that he come before the council so they could “take the bark off him,” and that “somebody’s head should roll” because of the potential budget increase.

Morrell said that while he was upset about the possible increase, he does not believe his comments were a threat.

“When Dennis [Marker] came in and began to tell us that the school was looking at a mill and three quarter increase, I blew a gasket,” said Morrell in September. “After all the months of work we did to try to bring back fiscal responsibility that hasn’t been there in generations, I said bring him in here and we’ll take the bark off him. Now I know for some snowflakes out there, that’s a bad word, but it’s not with the rest of reality.”

Morrell reiterated his belief that the recall petition is an effort to remove a fiscal conservative from the council, which he said are now the majority on the board.

“They tried to remove me from my seat and they couldn’t beat me there,” said Morrell, “so what’s the next logical step? The next logical step, to me, is this. I’m not changing the way I am because of, what I consider, the liberal snowflake left being butt-hurt over a bit of language.”

Lister said the recall committee is not targeting Morrell for his political ideology, nor is the committee just a small group of naysayers or troublemakers. She said concern about Morrell’s behavior has been growing among several community members.

“His assertion is a red herring to shift the focus off the manner in which he conducts himself while in the role of a councilor and his behavior while representing the citizens of Caribou,” Lister said. “Being fiscally conservative does not mean one throws out the baby with the bathwater while cussing at the parents who object.”

The committee is not going from door to door, and is instead making members available at various public locations for anyone interested in signing the petition. Lister said any registered voters can request a home visit with social distancing measures.

She assures anyone interested in signing that the signature pages will remain private until turned into the city clerk for verification.

“It is our right to sign without fear of retribution and we will exercise that right,” she said.

The response so far has been “dramatic and encouraging,” with requests to sign coming in every day. Lister said many signing have said the city deserves better, and that they want a community that is “forward-thinking, smart and prosperous.”

“[They] are not willing to look away when a sitting councilman refers to constituents and ‘a few public servants’ that disagree with his methods as ‘expletive expletive snowflakes,’” she said, adding that the committee has already gathered nearly 25 percent of the required signatures in the first two weeks of its petition efforts.

As a councilor, Morrell said his main priorities for Caribou are to get the city sustainably fiscally sound, and to reduce costs to the point where the city can sell themselves as something unique. He said he is going to continue speaking his mind at council meetings.

Members of the Houlton Band of Maliseets will head to the ballot box in order to determine who will be elected as their new tribal chief.
Pets END_OF_DOCUMENT_TOKEN_TO_BE_REPLACED