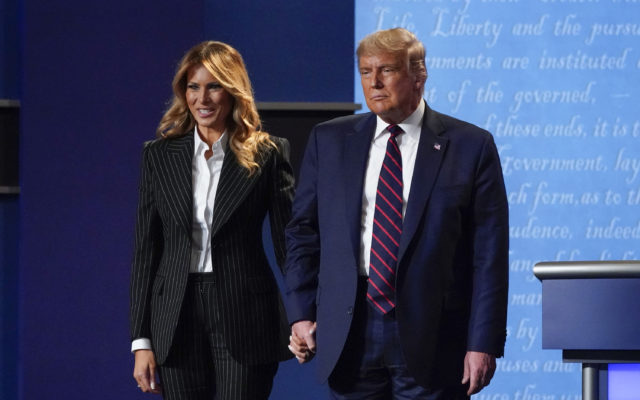 But for some, the announcement didn’t seem to immediately change their thoughts on the administration’s response to the COVID-19 pandemic.

Seemingly everyone in Presque Isle had heard the news by Friday morning — but individual reactions varied across the political spectrum.

John Carrier of Chapman — who voted for Trump in 2016 and plans to vote for him again next month — said that the incident left him disappointed.

“A lot of folks don’t like his way of doing things,” Carrier said. “But he is our president, and I do respect that.”

Carrier wears masks in public spaces that require him to do so, as well as in places that contain large groups of people, including in church and at the grocery store. He did not believe Trump’s diagnosis would change his mask habits.

He said that while Trump might not have “pushed hard enough” on COVID-19 at first, he had recently made a greater effort to wear masks in public. Carrier was hopeful that the president and First Lady Melania Trump — who also tested positive for the virus — would have a “perfect” recovery.

“I do believe things are going to be okay,” Carrier said. “[Trump] has a disadvantage with his age, but he seems to be a healthy person.”

Regardless of her own political beliefs, Orono local Roberta Bradson — who also owns The Store Ampersand — said she felt sad to find out that some celebrated upon learning that Trump had tested positive for COVID-19.

Bradson said she remembers the day John F. Kennedy was assassinated in 1963 and the devastating effects it had across the nation.

Mike and Patti Keating — a Florida couple who came to Maine on vacation — said they were concerned about the diagnosis and were praying for a swift recovery. “I kind of wish he’d wear his mask a little more,” Mike Keating said.

Tammy DeLong of Mars Hill — a Democrat who plans to vote for former Vice President Joe Biden — said she was not surprised the president had contracted the virus. She said he did not seem to take seriously many of the precautionary measures health officials recommend to avoid catching COVID-19, such as wearing a mask and social distancing.

DeLong said Trump’s diagnosis would not change her view on masks — she is a manager at Senior Planning Center in Presque Isle, where her interaction with older residents requires her to cover her face and maintain social distancing.

Nicole Leigh of Presque Isle — an independent who plans on voting for Joe Biden — said she wears a mask out of respect for the Star City community and because medical officials recommend it. She said the president’s diagnosis would not affect that.

Several in Presque Isle declined to comment, fearing that remarking on a partisan issue could affect their job security or their business. About 50 percent of the Star City (2,102 people) voted for Trump in the 2016 Presidential Election, while 42 percent (1,779) voted for Democratic candidate Hillary Clinton.