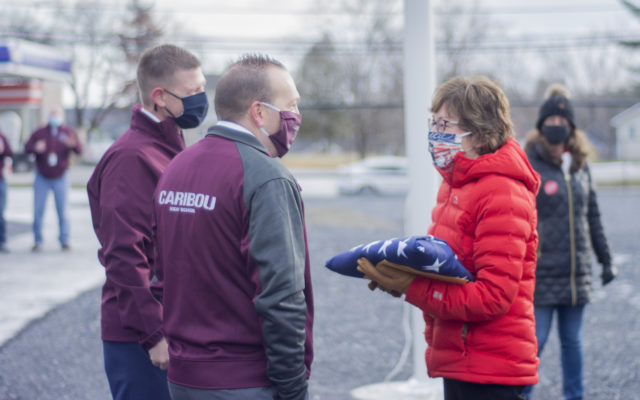 Chris Bouchard • November 3, 2020
U.S. Sen. Susan Collins made an Election Day stop at the opening of the new Caribou Community School on Nov. 3, where she presented and raised an American flag that had flown over the nation’s capital.

CARIBOU, Maine — U.S. Sen. Susan Collins made an Election Day stop at the opening of the new Caribou Community School on Nov. 3. Collins presented and raised an American flag that had flown over the nation’s capital, led the group in the Pledge of Allegiance, and shared stories from her experiences in the Caribou school system.

The school, which opened to teachers and staff Tuesday, is set to open for students on Nov. 9, and will accommodate social distancing guidelines amid the COVID-19 pandemic.

Caribou Community School Principal Leland Caron spoke to the staff outside the building shortly before Collins, a Caribou native, arrived with two buses for an early stop on her Election Day tour of Aroostook County.

“It’s awesome to see everyone here for the first time ever,” said Caron, who added that RSU 39 (Caribou and Stockholm) Assistant Superintendent Jane McCall helped design the maroon jackets worn by all staff and employees.

“[McCall] worked hard to put this together,” he said. “It’s nice to have that new look while moving into a place like this. I just want to thank Jane and say it’s good to see everyone here.”

The group of roughly 100 people erupted with applause as Collins stepped off the bus holding a flag from the nation’s capital, which she said was designed specifically to fit the dimensions requested by the school administration. 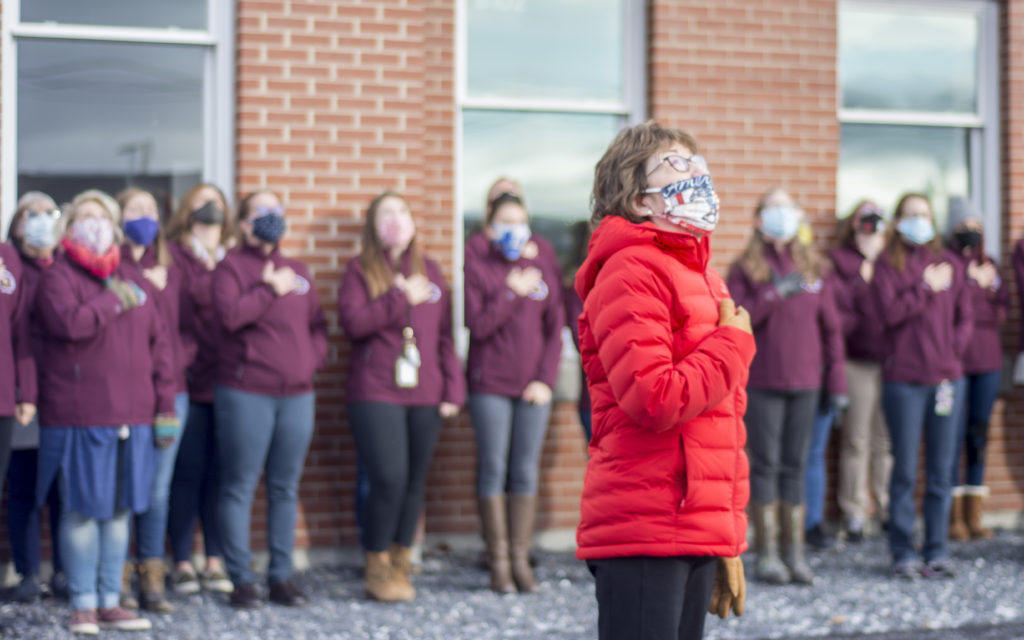 U.S. Senator Susan Collins leads employees of the Caribou Community School in the pledge of allegiance after raising a flag flown over the nation’s capital for the facility’s Nov. 3 opening for teachers, staff. (Chris Bouchard | Aroostook Republican & News)

After raising the flag and leading the group in the Pledge of Allegiance, Collins shared some stories of her time growing up in Caribou, and the impact that local educators had on her as a student.

“I went to Teague Park School, and my first grade teacher’s name was Viola Lily Cummings,” she said. “I remember she wrote her name on the board during the first day and told me that her first two names were the names of flowers; it’s so funny the things you remember from when you were little, and I think it shows the influence that all of you who are involved as educators make in the lives of children.”

She said her second grade teacher, Mrs. Winslow, ignited in her a love of reading that has lasted her entire life.

“Mrs. Winslow was so patient, so kind and so sweet, and she just opened the doors of reading to me,” she said. “That’s the difference that you make. As a very proud native of Caribou and graduate of Caribou schools, I just want to thank each and every one of you for all that you do. You must be very eager to get into this new school; it’s quite a change from Teague Park.”

Collins said she was glad her office could help facilitate a land swap needed with the National Park Service, allowing the new school to be located on land that was formerly a park. Administrators involved with the project have said that Collins’ assistance was instrumental in helping the project come to fruition. 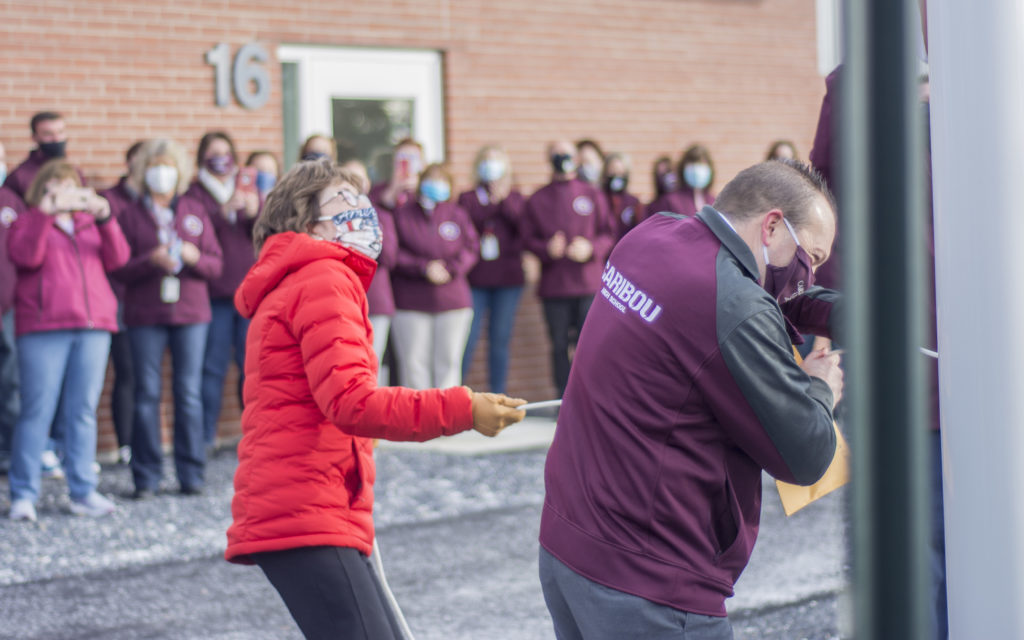 U.S. Senator Susan Collins raises the flag in front of the Caribou Community School on Nov. 3, marking the state of the art facility opened to teachers and staff. Collins, a Caribou native, shared stories of her time in the Caribou school system after leading the group in the pledge of allegiance. (Chris Bouchard | Aroostook Republican & News)

“I thank your principal and your vice principal for inviting me,” she said. “As you know it happens to be quite an important day, but I can’t think of anywhere that I would have rather started off than my hometown of Caribou. Go Vikings.”

The crowd once again roared with applause as Collins took a moment to speak with teachers and prepared to depart for her next stop in Washburn.

Caron and Caribou Community School Assistant Principal Travis Barnes both said they were excited to see everyone come together again for the first time since March.

“It’s just a thrill to be able to move forward with the children and to work with our staff again,” Caron said.

For the remainder of the week, staff at the school will have four days of workshop time to acclimate themselves to the classrooms and the new state-of-the-art technology they have to offer.

All students, for example, will have laptops and be able to synchronize their work and projects with a 70-inch smart TV that will act as a modern chalkboard. Rooms will also have audio equipment to ensure that all students are heard clearly throughout the class, and even feature specially designed chairs that allow for multiple sitting positions to eliminate fatigue.

“We have a state-of-the-art building and a variety of different technology that the staff are going to be able to use. They’re excited to work in their classrooms, but they’re also excited to see what everyone else has in their room and what they’re going to offer. We’re just excited to get underway this week so we can get the kids here next week,” Barnes said.

Both Barnes and Caron said the district is “very fortunate” to obtain this new school, and that Collins’ appearance was a great way to kick off Caribou moving into a new era of public education.

“This was a perfect kickoff,” Caron said. “We couldn’t have asked for anything better.”

Gubernatorial candidate John Glowa said that he wants to spur government reform that truly creates a system of, by and for the people when he visited Presque Isle City Hall.
Pets END_OF_DOCUMENT_TOKEN_TO_BE_REPLACED

Many of you have been asking about our super popular “Toast to the Animals” celebration. After several COVID-19 cancellations and not being able to host this great fundraiser, we are finally ready to celebrate the animals once again and help support the Central Aroostook Humane Society.
What's Happening This Week END_OF_DOCUMENT_TOKEN_TO_BE_REPLACED