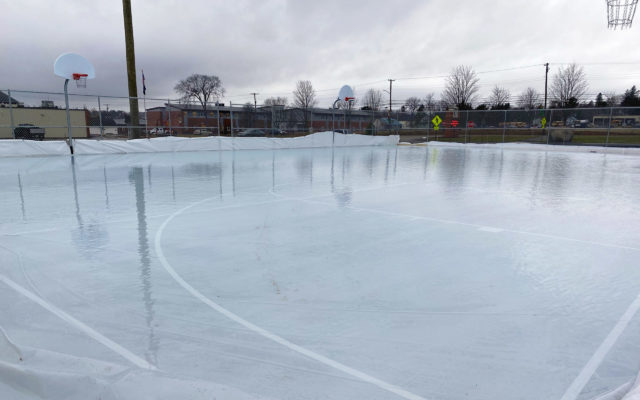 Chris Bouchard • December 3, 2020
Aroostook residents can enjoy a myriad of winter activities through the Caribou Parks and Recreation Department, including ice skating, for the rest of the season.

CARIBOU, Maine — Aroostook residents can enjoy a myriad of winter activities through the Caribou Parks and Recreation Department, including ice skating, for the rest of the season.

Neal Sleeper, program director at the rec department, said this is the first time in six or seven years that the city has offered ice skating.

With the new Teague Park facility recently transferred to the city, Sleeper said they were able to convert the new basketball court into a rink. The department bought a liner for the pool, which he said means the rink will be self-contained.

“If we endure any thaws this winter, the water will stay there, and when it re-freezes we’ll have a rink again without having to re-flood the area,” he said.

The rink was completed in early December, Sleeper said.

Additionally, the department will offer singles pickleball and corn hole games, and youth bowling. In January, it will host a downhill skiing gate racing program at the Caribou High School Alpine Hill, as well as a “learn to skate” class at the rink. Programs will continue through early April.

A full program book is available online and through the department’s Facebook page.

Sleeper said they have taken extra precautions amid the COVID-19 pandemic, and that the safety of participants, staff and the community as a whole, is paramount. They are doing this through limiting the maximum number of program participants, requiring face coverings, taking temperatures at the door, and also asking participants to sanitize their hands at the beginning and end of all programs.

“We’re encouraging people to label any water bottles they bring,” he said. “We’ve had to tape off all our water fountains in the building in order to reduce community transmission.”

Sleeper said the department has been mirroring the safety plans of local schools, as the Caribou Community School is just across the street and many of the department’s volunteers and employees are Caribou High School students.

As of Dec. 7, the department announced that they are following RSU 39’s “red” model and are closed to anyone associated with any school district that is currently in remote learning only. They have also changed their hours to 6 a.m. to 5 p.m. on weekdays and are closed on Saturdays until further notice.

If a school goes red, he said it results in the rec department temporarily slowing down or halting programs and hours of operation in the building.

“Everything is kind of day-to-day right now,” he said. “We’re really erring on the side of caution; we may start a program on Monday and then put the brakes on it the following Tuesday. It’s not something we’re doing maliciously or to inconvenience people. We don’t want to put any families in harm’s way. We’re doing this to protect our community.”

Sleeper said the city has plenty of outdoor activities to offer, all of which can have a positive impact on both mental and physical health.

“Staying inside and being overwhelmed by the virus and by what you can’t do is not going to benefit anyone,” he said. “Exercising outdoors is critical to the well-being of our community, and we’re lucky to have facilities like an ice rink, maintained ski trails, snowshoeing trails behind Cary Medical Center, the wildlife refuge in Limestone, and to be able to work with the school department to use Alpine Hill. These are all paramount to the well-being of our residents during the winter.”

Forbidden foods for our four-legged friends are many and can be very dangerous if ingested. Sometimes, we give our pets leftovers or what we consider treats. According to many sources, some human foods can make an animal very sick, and in certain cases can even be lethal.
What's Happening This Week END_OF_DOCUMENT_TOKEN_TO_BE_REPLACED