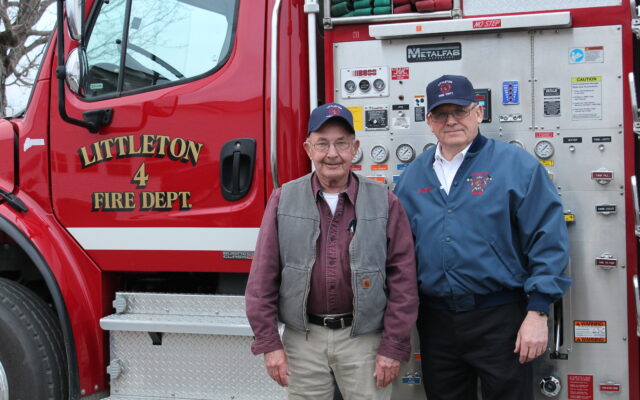 Contributed • April 15, 2021
By Karen Donato, Special to the Houlton Pioneer Times LITTLETON, Maine -- Dwight Cowperthwaite, the only fire chief the town of Littleton has employed, will leave his position at the end of the year, ending 40 years of service to the community.

By Karen Donato, Special to the Houlton Pioneer Times

LITTLETON, Maine — Dwight Cowperthwaite, the only fire chief the town of Littleton has employed, will leave his position at the end of the year, ending 40 years of service to the community.

On April 12, Cowperthwaite hosted his last firemen’s recognition supper. As he addressed the group, he shared his love for his community and the people who had supported this endeavor for 40 years. He wanted the selectmen to know how their cooperation had impacted his career and the success of the fire department.

“Without that comradery, it may have been much different,” said Cowperthwaite.

The Littleton Fire Department got its humble start in April of 1981, when residents voted to create their own fire department. The town had previously contracted with Houlton for fire protection, but faced with increasing charges a decision was made to go on their own.

“Where there’s a will, there is a way,” noted comments from a previous article written that year, by the late Pioneer Times staff writer, Kaye Trickey. “How could a small town community, comprising six square miles with 300 households, organize and form a fire department with volunteers and help from its residents in such a short time?”

Within days, a new fire truck had been ordered and a rebuilt water tanker was found. The late Cub Morse was hired to plan and construct an addition on to the Town Office. It was built with free labor and this was accomplished by two “building bees.”

As well as the free labor, Glen Clarke of Maine Glove Company and the late Reggie Walton, owner of Walton Petroleum donated building materials. Clarke and Walton were Littleton businessmen. Many other private donations also contributed to the project. 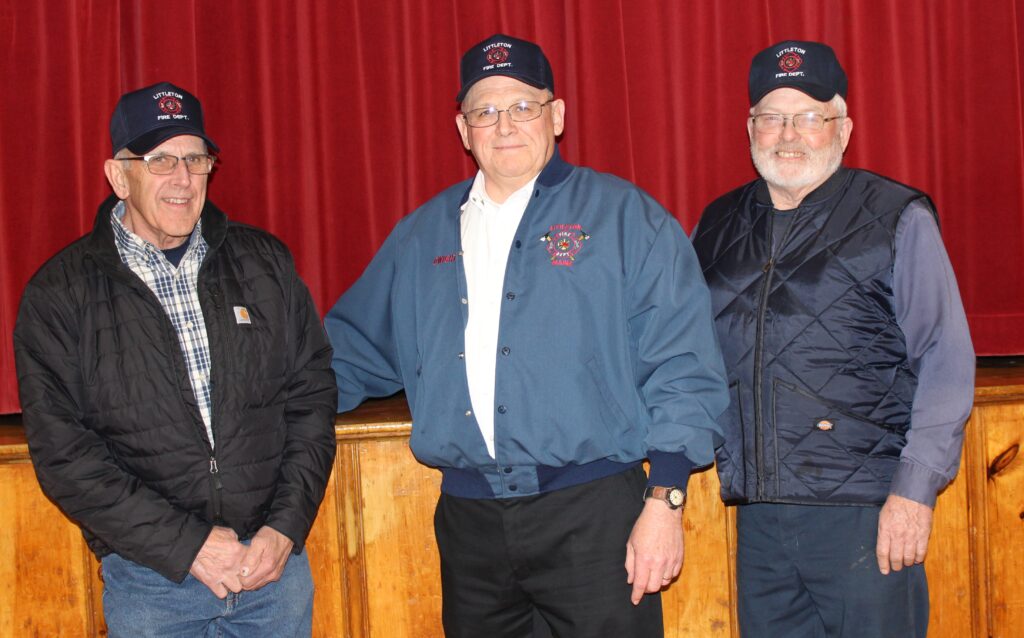 LITTLETON, Maine — April 15, 2021 — Dwight Cowperthwaite (center) will retire as chief of the Littleton Fire Department at the end of the year. He served 40 years as the town’s first and only chief. Captain Allen Duff (left) and Assistant Chief Barry Campbell (right) have also been with the department four decades. (Photo courtesy of Karen Donato)

Just one of the selectmen survives from that core group of 1981 and that is Raymond Wotton, who now serves as an honorary member of the department.

In 1982, the ladies of the town formed an auxiliary to assist with fundraising and other needs for the fire department. They continued in that role for many years providing the firemen with much needed equipment. The auxiliary sponsored craft fairs, sold t-shirts, had penny drives, box socials, community picnics, hunters’ breakfasts, created a community birthday calendars and had a local cookbook published. Through their hard work they provided red L.F.D fire hats to the firemen, air packs, a ladder, fire department jackets, and replaced an overhead door at the fire department among many other needs.

In 1996, a 32-foot by 40-foot addition that included two additional bays was added to the existing building. This addition provided room for a pumper, a pumper-tanker, a tanker and a wildfire/rescue unit.

In 2011, after 31 years and submitting grant applications for many years, Littleton received an Assistance to Firefighter Grant from FEMA for $225,000 to replace an old gas tanker made into a water tanker. Two years later, the fire department purchased a used pumper to replace the original 1981 fire pumper, which had been leaking. In 2019 the fire department received another FEMA grant for $166,000 to replace a 1965 military truck, which had been converted for wildfire use. During these years of applying for funds from FEMA, they received grants ranging from $40,000-$66,000 for equipment.

Cowperthwaite has been diligent in keeping abreast of the latest firefighting techniques. He has planned training sessions and spent countless hours, maintaining the equipment and doing a lot of paperwork with his crew.

A lifelong Littleton resident, Cowperthwaite went on to graduate from Houlton High School in 1966. After high school, he signed on with the Maine Army National Guard and after his training returned to join his dad, Arnold, and his older brother, David, on the family farm. Cowperthwaite married Sheila Campbell and they are parents of two daughters. He continued being a part of Houlton’s B Battery for 28 years, retiring with the rank of First Sergeant.

In 1999, after 33 years on the farm, he left to embark on a new career with the United States Department of Agriculture. He was a lab technician for the New England plant, soil and water lab in Presque Isle. While maintaining this full-time job, Cowperthwaite was also involved as an out of state Wildland Firefighter, but still handling the responsibilities of chief of the fire department.

During his career he served as president of the Aroostook County Fire Chiefs Association and was the town of Littleton’s Emergency Management Director. In his leadership role, Cowperthwaite secured two mobile generators (one to be used at the Southern Aroostook Agricultural Museum for a possible warming center and the other at the Littleton Pit Stop to provide for fuel and food items during a natural disaster.)

During the April 12 event, Cowperthwaite expressed how his fellow firefighters had become his family too, and he will miss them as he transitions into retirement at the end of the year. He presented five members with 40-year pins — Jamey Watson, Jeff Hubert, Keith Nason, Allen Duff and Barry Campbell. Duff and Campbell have held the positions of captain and assistant chief respectively for the past 40 years.

Cowperthwaite noted the challenges that may come in the years ahead and encouraged those in attendance to watch out for each other, be there for each other, and continue the legacy of the organization.

As the evening ended Cowperthwaite said, “As always, I have found satisfaction in serving the good people of the town of Littleton.”

His dedication, integrity and professionalism will be missed by his hometown community. He has been a great community representative of service. Not unexpected, as school history noted him as the recipient of his 8th grade ‘Good Citizenship Award’.

A new chief has not been selected yet, but it may come with the stipulation that the chief is responsible for a cake or dessert for each monthly meeting, something that Cowperthwaite’s wife, Sheila, has provided for the past 40 years.

The community of Littleton’s parting words to Cowperthwaite at the meeting: “Thank you for a job well done. We have appreciated your time, your dedication and the outstanding way you have represented us and protected the residents of our town. We wish you well.”

Forbidden foods for our four-legged friends are many and can be very dangerous if ingested. Sometimes, we give our pets leftovers or what we consider treats. According to many sources, some human foods can make an animal very sick, and in certain cases can even be lethal.
What's Happening This Week END_OF_DOCUMENT_TOKEN_TO_BE_REPLACED