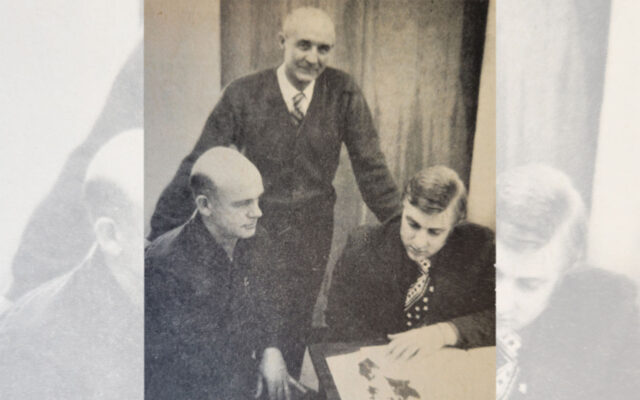 Yvonne Tardie • May 5, 2021
75 Years Ago -- May 2, 1946 Veterans Information Center director awarded -- Clinton O. White, director of the Veterans Information Center of Presque Isle, was awarded a certificate of merit by the Maine Council of Veterans Affairs for successfully completing courses of study at Augusta and Togus for information center directors, and for meritorious services rendered veterans of Presque Isle.

The certificate was signed by Governor Horace Hidlreth and Lt. Col. Robinson Verrill, chairman of the Maine Council of Veterans Affairs. White, who served with the 203rd Field Artillery, enlisted in the Army Oct. 11, 1939, and was discharged Oct. 2, 1942.

Burt Brown won first prize in essay contest — The American Legion Auxiliary, of this city, announced the winners of the Americanism essay contest, in which the Juniors and Seniors of the local High School participated. Burt Brown, son of Mr. and Mrs. Leroy Brown, was the winner of the first prize, which was $5. Second prize, $2.50, was awarded to Leland Porter, son of Mr. and Mrs. Olin Porter. Miss Joyce Wilson received honorable mention. Mr. Brown’s essay, entitle American Citizens, – Our Responsibilities, Our Privileges, had been sent to the Department in Portland to compete in the State contest. The judges of the essays were Mrs. Esther Gove, Miss Witha Jardine, Miss Avis Merritt, Miss Marion Conant and Mr. F. S. Cunningham.

Leslie H. Gardner attained Eagle rank — Leslie H. Gardner, son of Mr. and Mrs. C. Holmes Gardner, Presque Isle, was awarded the rank of Eagle Scout in Court of Honor ceremonies of Troop 171, Boy Scouts of America, held April 28 at the Grant Memorial United Methodist Church on Academy Street. Gardner was Junior Assistant Scoutmaster for Troop 171 and a member of the freshman class of Presque Isle High School, he held the office of homeroom president. He was also a member of the school’s baseball team and was manager of the freshman basketball team. He had been a boy scout for three years, a short period of time to rise to the rank of Eagle, which requires earning 21 merit badges. Gardner surpassed that goal and had a total of 15 merit badges to his credit.

New principal appointed — At a meeting of the SAD No. 1 school board of directors, Romeo O. Marquis, Van Buren Principal, was elected to replace Presque Isle High School principal Hazen Moores. One of two candidates who applied for the position, Marquis, principal of Van Buren District High School, a post he had held since 1968. SAD No. 1 directors were notified of his candidacy only a few days before the meeting on Tuesday evening, April 17.

Owl women took five of six — The University of Maine at Presque Isle softball team completed their most successful week in at least a dozen years as they pulled off five wins in six games. The Owls, who gained the No. 3 seed in the Maine Athletic Conference tourney, swept Husson College in a doubleheader the prior Wednesday before splitting two with Thomas College Saturday and winning both games of a twinbill against UM-Farmington Sunday.

Smith received an award — Melissa Smith, a senior at Presque Isle High School, received a silver medallion from Lawrence Gagnon, general manager of The Prudential in Bangor. Smith received the medallion as part of The Prudential Spirit of Community youth awards program designed to recognize young people for outstanding self-initiated acts of community service. Smith was recognized for organizing the area’s first Multiple Sclerosis Walk-a-thon which raised over $2,000. In addition to receiving this medallion, Smith participated in a four-day event in Washington, D.C., where she received $1,000.

Members of the Houlton Band of Maliseets will head to the ballot box in order to determine who will be elected as their new tribal chief.
Pets END_OF_DOCUMENT_TOKEN_TO_BE_REPLACED