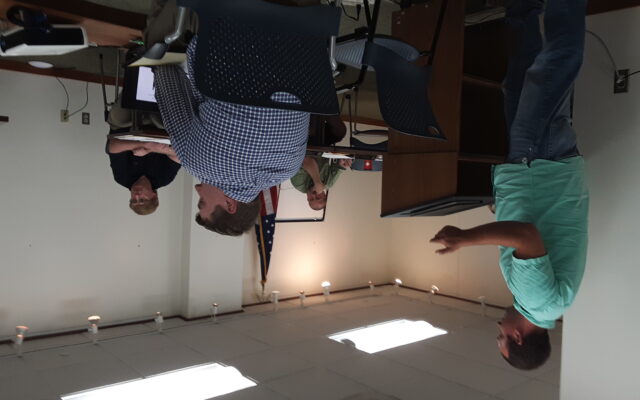 The council held a public hearing in which Griffin St. Peter, the city’s newly appointed code enforcement officer, and Eric and Jacqueline St. Laurent, the former owners of a home at 36 Elm St., spoke about progress that has been made in demolishing the structure.

The St. Laurents owned the home until 2016. After the property was condemned and tax-acquired in 2019 and 2020, respectively, they entered an agreement with the city to pay back taxes.

At a previous meeting, councilors had learned of the couple’s plans to build a tiny home on the Elm Street property by reusing lumber from the original home and other materials.

On Wednesday, St. Peter confirmed that Eric Laurent had obtained a demolition permit and a building permit for the tiny house. A large generator that had brought about noise complaints from neighbors has since been replaced with a smaller generator attached to the camper where the St. Laurents are living.

Councilor Craig Green asked if the St. Laurents have contacted Versant Power to set up a time for hooking up temporary electric power to the camper.

“At this point we’ve heard numerous complaints from neighbors about noise [from the generator],” Green said. “Even the small tailgate generators can make a lot of noise.”

Eric St. Laurent said that he has contacted Versant Power to try to set up more permanent electric power. He also said that he fully intends to demolish the home and is separating reusable building materials from those that can be discarded.

“The demolition shouldn’t take much longer,” Eric St. Laurent said. “Money, as you know, is the biggest limiting factor, so I’ve been trying to reuse as much as possible.”

But councilors and neighbors still expressed concerns about noise taking place due to demolition. Paige Huston, who spoke during the May council meeting, said that the smaller generator has caused much less noise than the larger one, but she urged the council to make sure the construction ends sooner rather than later.

In the past, Huston has expressed frustration over garbage that accumulated on the property and what she referred to as a lack of action from police and the city regarding noise complaints.

“I’ve got nothing against anybody. I know it’s taken a long time to get there, long enough that I’ve had to come to a council meeting,” Huston said. “I’ve put my neck on the line for my sanity and the sanity of my neighbors. We want to see things continue in a positive direction.”

When asked if he could potentially demolish the existing house structure and build a foundation for the tiny home by Nov. 7, Eric St. Laurent said that he could easily complete work by that deadline.

All six councilors present voted unanimously in favor of establishing Nov. 7 as the deadline for demolition and the start of the tiny home construction. Councilor Doug Cyr was absent from Wednesday’s meeting.

Councilors also reapproved the medical marijuana license of Star City Wellness, owned by Joe Pelkey and Chase Norton. The business recently failed a code inspection of their building at 483 Main St. due to a lack of odor control and inadequate smoke detectors. City Manager Martin Puckett said that Pelkey and Norton have since installed carbon filters to control the odor and new smoke detectors.

Both license approvals required separate public hearings, which brought about a discussion between councilors and a concerned resident. Robin Thurston, a member of Drug Free Aroostook, claimed to have emailed information to councilors regarding the health effects of marijuana on youth, but said she received no responses.

Thurston expressed concern about the growing number of marijuana businesses and how young people might interpret their presence in the community.

“I question the location [of Richardson Remedies]. It’s highly visible on Main Street and it could make our youth think, ‘Hmmm, I guess it’s okay to smoke dope,'” Thurston said. “Is there a limit to how many stores you can allow?”

The city does not intend to limit the number of marijuana businesses in much the same way that they would not limit other businesses, Councilor Mike Chasse said.

“I’m not a marijuana user, but I would not try to limit the businesses people can open. There are multiple bars in town and multiple car dealerships in town,” Chasse said.

Green addressed Thurston’s concerns about the proximity of marijuana businesses to Main Street. He noted that the city abides by the state’s laws regarding where those stores can be located and that there are legal reasons for placing stores in visible spots.

“They’re in locations where police and the public can easily see them,” Green said. “The more eyes that are on those properties, the more secure they are.”

In addressing Thurston’s concern about marijuana being a potential “gateway drug” for youth, Councilor Jeff Willette said they need to balance youth education with the necessary access to marijuana for people who use the drug for health reasons.

“For some people, marijuana is a ‘get-out’ drug that they use to get off of the harder drugs. Being able to go into a store gives them an avenue to step down [from their addiction],” Willette said.

Though the discussion with Thurston did not alter the council’s decision about Richardson’s Remedies, Willette acknowledged Thurston’s concerns.

“It all starts in the home. We have to educate our kids while at the same time allowing access for other people,” he said.

Gubernatorial candidate John Glowa said that he wants to spur government reform that truly creates a system of, by and for the people when he visited Presque Isle City Hall.
Pets END_OF_DOCUMENT_TOKEN_TO_BE_REPLACED

Many of you have been asking about our super popular “Toast to the Animals” celebration. After several COVID-19 cancellations and not being able to host this great fundraiser, we are finally ready to celebrate the animals once again and help support the Central Aroostook Humane Society.
What's Happening This Week END_OF_DOCUMENT_TOKEN_TO_BE_REPLACED