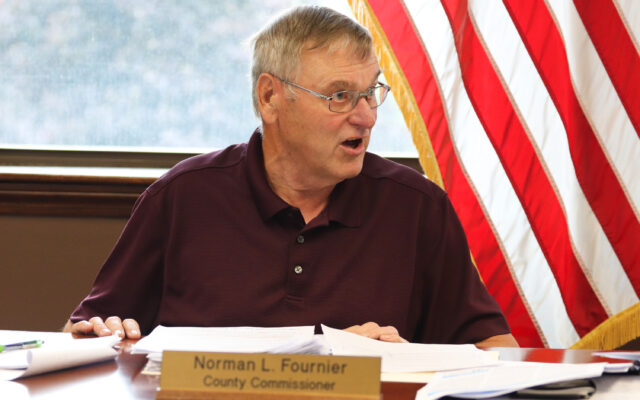 Alexander MacDougall • July 22, 2021
The Aroostook County Commissioners voted to withdraw a resolution to make The County a Second Amendment sanctuary after John DeVeau, the former Maine House Representative and originator of the resolution, requested it be replaced with a new resolution.

HOULTON, Maine — The Aroostook County Commissioners voted to withdraw a resolution to make The County a Second Amendment sanctuary after John DeVeau, the former Maine House Representative and originator of the resolution, requested it be replaced with a new resolution.

DeVeau had brought the initial resolution to make The County a safe haven for the right to bear arms, a mostly symbolic designation, at the previous commissioners’ meeting. At the July 21 meeting in Houlton, DeVeau requested that his previous proposal be withdrawn, in favor of one he sent just that morning to the commissioners.

DeVeau said the initial resolution could be perceived as giving the commission the authority to tell the Aroostook County Sheriff to enforce or not enforce certain laws.

“That’s not something I’m willing to bring forward,” DeVeau said. “Instead, the resolution you have in front of you now says that you, the county commissioners for Aroostook County, will follow and abide by your oath of office, and that not one constitutional right, or one bill of right, or one inherent right, but all of them will be protected by you against the state and federal government.”

The idea of towns and counties adopting Second Amendment sanctuary resolutions is controversial, and was recently spurred on by the Aroostook town of Fort Fairfield adopting such a resolution back in February. Piscataquis County was the first to declare itself a Second Amendment county.

“I don’t want to prolong this agony,” Fournier said. “I feel this motion, this resolution is properly before us, and you just don’t change things in midstream.”

Despite being a self-avowed owner of multiple firearms, Fournier spoke critically of the proposed resolution. He cited a 2008 opinion by conservative U.S. Supreme Court Justice Antonin Scalia, affirming the constitutionality of an individual to own firearms, but which also stated that such a law was not unlimited and that gun ownership can be regulated.

Sue Tortello, who serves on the Houlton Town Council, also attended the meeting to speak against the proposed resolution.

“Even though it has been stated that this would merely be a symbolic gesture, I question what message it’s sending,” Tortello said. “By adopting this designation to make Aroostook County a Second Amendment sanctuary, you are essentially declaring that this is what Aroostook County stands for and it’s what we believe, but I as one of its voters do not believe that.”

Richard Pelletier, another Aroostook resident, attended the meeting to speak in support of the resolution and his strong support for the Second Amendment.

“If police officers are sent by the government to come and get our guns, you’re going to bury half of them,” Pelletier said. “We’re not making threats or anything, I’m just explaining that the Constitution is there, the state constitution is also there, and let’s abide by it.”

Next year's Caribou City Council will include a new member and a longtime councilor thanks to Tuesday's election.
Pets END_OF_DOCUMENT_TOKEN_TO_BE_REPLACED

When I wrote the first story of our dog Odie, I didn’t know that I would write a Part 2, but there were so many more stories that I decided more of this little dog’s story needed to be told.
What's Happening This Week END_OF_DOCUMENT_TOKEN_TO_BE_REPLACED