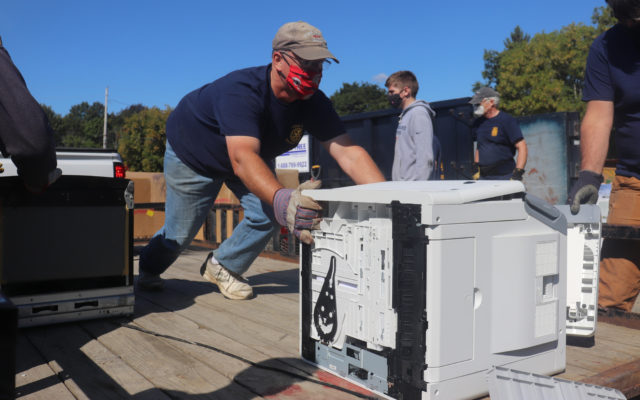 Joseph Cyr • September 3, 2021
Discarding old electronics can be an expensive proposition for people as most area landfills charge a fee for these items due to the harmful effects they have on the environment.

HOULTON, Maine — Discarding old electronics can be an expensive proposition for people as most area landfills charge a fee for these items due to the harmful effects they have on the environment.

For the past five years, the Houlton Rotary Club has gone to great lengths to help reduce the carbon footprint in local landfills through its free E-Waste Recycling program.

Unfortunately, this year’s event is not happening.

The brainchild of Dannette Ellis from Aid for Kids, the Houlton Rotary Club took over the program in 2016 and to date has collected 386,485 pounds of recyclable materials, ranging from old televisions and computers to calculators and stereo systems.

Rotarian Mac Randolph said the club took interest in the recycling program as a way to reduce the amount of trash found alongside roads and wooded areas, while also helping the environment.

“One old tube TV has almost eight pounds of powdered lead sprayed inside the tube, ready to leak into our environment,” Randolph said.

Traditionally held the first Saturday after Labor Day, the club has worked with Electronics End in Brewer.

“The Rotary Club, along with owners Bruce and Linnea Jacobs, had no idea how well, or how big the event was going to be,” Randolph said. “As it turned out, it was huge.”

“In December of 2020 I received a letter from Bruce and Linnea Jacobs (owners of Electronics End) that they were retiring and no one was interested in taking on their business,” Randolph said.

Rotarians scrambled to find another group to partner with, in hopes of keeping their popular service to the community moving forward. The group reached out to Elena Bertocci from the Maine Department of Environmental Protection, who was aware of the Houlton Rotary’s successful program with Electronics End, and gave the Rotarians four possible partners.

“At this point, we realized just how much Electronics End did for the event,” Randolph said. “Two of the four companies flat out stated that they do not do E-Waste events at all. One quoted us a charge that was more than tripled the largest donation/sponsor money taken in by the event over the last 5 years.”

The fourth company — give IT-get IT in Waterville — expressed an interest, but could not come up with a concrete plan for 2021, Randolph said.

“The event is very important to the Rotary Club of Houlton, and in our opinion, the town of Houlton and surrounding communities,” Randolph said. “People have come to count on the event. It was the E-Waste core team’s feelings that we were so far behind at this stage that attempting to force the event for 2021 would most likely result in a poorly organized event, or a very costly event.”

Those individuals looking to dispose of electronics may do so at Pine Tree Waste, 59 Alice Ave. in Houlton for a fee.

For the first time since 2019, there is competition for open seats on the Houlton Town Council
Pets END_OF_DOCUMENT_TOKEN_TO_BE_REPLACED

We hope everyone enjoyed a wonderful holiday season and is looking forward to the new year.  December was a busy month at the Central Aroostook Humane Society with so many people and businesses bringing in much-needed supplies and monetary donations, which help us to take care of the special temporary pets in our care.
What's Happening This Week END_OF_DOCUMENT_TOKEN_TO_BE_REPLACED